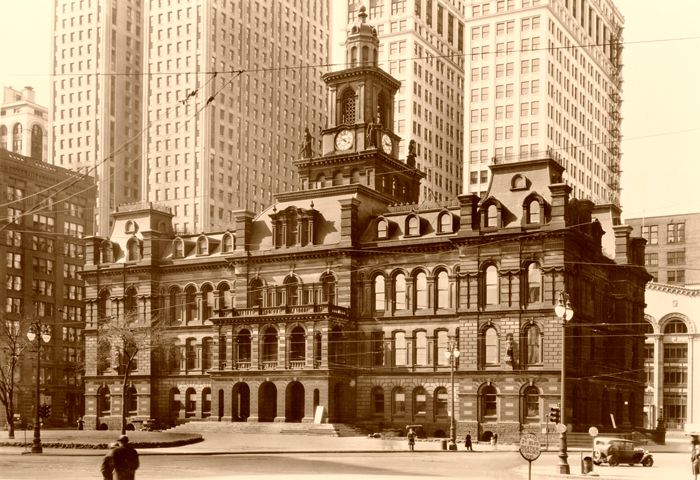 Detroit, Michigan’s old old City Hall opened in 1871 and included three stories, an observation deck, and a large clock tower. The Detroit City Hall was the seat of government for the city of Detroit, Michigan from 1871–1961. It was demolished in 1961.

Plans by architect James Anderson were complete in 1861, but construction was delayed due to restrictions on building materials during the Civil War and political infighting over bids and contracts. A foundation was finally laid in 1867 and construction was finished in May 1871 at a total cost of $602,130.

Sitting on the west side of Campus Martius, the building measured 200 feet in length by 90 feet in width, and the tower rose 180 feet tall. The clock tower was the centerpiece of the city and almost every year since 1871, the magic of its booming bell on New Year’s Eve summoned hundreds of couples to City Hall, where they would kiss at the stroke of midnight. The building predated the city’s first skyscraper by nearly two decades, so it literally towered over everything around it for years. 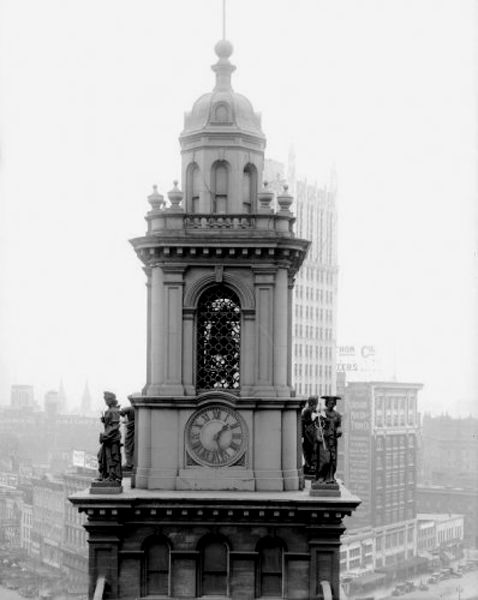 The interior was outfitted with black walnut and oak furnishings relieved by woods of lighter color and the courtrooms and offices were filled with natural light pouring in through 15 large windows on each floor. Black and white marble covered the floors and the grand staircase was cast of iron. Gracing the front of the building were two iron fountains, cannons captured in the War of 1812, sculptures, and a low stone fence and a spacious green space in front where flowers spelled out the words, “Welcome, Thrice Welcome.” The building was dedicated on July 4, 1871, with speeches, songs, a gun salute, and rockets and Roman candles set off from the building’s clock tower. The clock was switched from mechanical machinery to electrical in 1884. Before, the clock had to be wound on a treadmill-like device with a shaft that ran from the basement to the top; a city staffer had to take 1,512 steps to raise the time weight to the top.

“The new City Hall has probably no superior among the municipal halls of the country; both the building and its site command universal admiration and are in every way well adapted for the convenience of the people and the officials.” — Silas Farmer, historian, 1884

The Italian Renaissance Revival building was first threatened when it was just 20 years old when Detroit Mayor Hazen Pingree wanted it torn down to build a new one. However, his request didn’t go through. More attempts to demolish it followed in subsequent years which were denied until a new City-County Building was built in 1955. 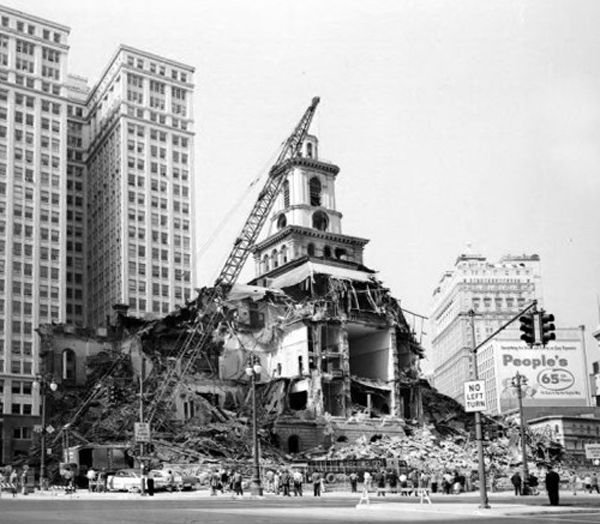 Demolition of the Detroit City Hall in 1961.

Though a poll by Survey Associated showed Detroiters favored preservation of the building 58% to 21%, the Common Council, with the support of Mayor Louis Miriani, voted five to four in January 1961 to demolish the building. Although preservationists took the fight to stop the demolition all the way up to the United States Supreme Court, all requests for injunctions were denied. Demolition began August 14, 1961, and was completed the next month. Taking its place was an underground garage covered over by Kennedy Square, a concrete plaza with a fountain as its centerpiece. In 2005, Kennedy Square was replaced by One Kennedy Square office building.