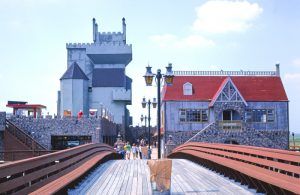 Brigantine Castle, located on the ocean beach at 14th Street and Brigantine Avenue in Brigantine, New Jersey, was once a popular funhouse and haunted house attraction that drew thousands of visitors each year.

In the early 1970s, the site at the North End of the Island was called the Seahorse Fishing Pier, which was mainly utilized by locals and offered a few children’s amusements, a beer bar, and pier fishing.

That began to change in 1975 when businessman Carmen Ricci approached the City of Brigantine with an ambitious plan to renovate the old Seahorse Pier, which had deteriorated over the years by storms and neglect. Ricci obtained city approval, and work started to build a very large pier. On January 2, 1976, work began on a medieval-style castle complex on the pier, completed and ready to open for Memorial Day that year. With its turrets soaring to over 100 feet high, the castle was a haunted-themed attraction that immediately drew visitors. 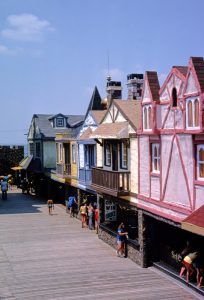 In addition to the haunted house, more amusements were added, including restaurants, miniature golf, arcade games, shops, and a fishing pier. Brigantine Haunted Castle and Amusement Pier boosted the economy of the secluded little fishing town and “put it on the map” as swarms of visitors made their way to the island every summer to experience the thrills and chills of the Haunted Castle and the excitement of the amusement pier.

Its initial success was mainly due to Ricci’s extensive advertising campaign, which included print, radio, and television commercials in Pennsylvania, New Jersey, and New York, which drew busloads of visitors to the castle and thousands of new visitors to the Brigantine Island. Another reason for its success was the great group of performers that the castle employed each summer, many of which were young drama majors. After countless hours preparing sets, costumes, and new acts, they kept the haunted castle interesting by changing the performances each summer. These actors portrayed such characters as the Addams Family, Butcher and the Vamp, Frankenstein, the Headless Woman, the Bell Tower Creature, the Bride of Dracula, and more. Visitors loved the live spooks that haunted the twisting walkways in the five levels of the castle — so much so that the people waited for hours to get in the first year, with lines going down the block. 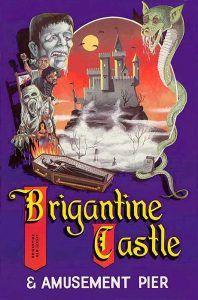 Although early business was great for Brigantine Castle, it created many problems with the Brigantine community as the pier was not adequate to handle the busloads of visitors that arrived. As kids waited, they were knocking on people’s doors, asking to use their bathrooms, and urinating on lawns. Traffic and parking were also significant problems. This led to a lawsuit in the late 1970s, and although Carmen Ricci won, the city created ordinances that limited charter bus traffic and castle advertising. Afterward, business dropped at the castle.

However, the business survived and continued to draw large crowds until a storm in August 1982 severely damaged the pier and the castle to the tune of $500,000 in damages. Although Ricci held a government flood insurance policy, the federal government refused to pay for the damages caused by the storm. However, the venue continued to operate.

Another major blow came in May 1984, when eight teenagers were trapped and killed by a fire inside the haunted house at Six Flags Great Adventure in Jackson, New Jersey. This changed how public safety officials handled such attractions, and soon, Brigantine Beach officials required Ricci to conduct an engineering study. Though the haunted castle had the mandatory sprinkler systems and external fire escapes, the rest of the pier did not. When the study was complete, it also revealed that the pier structure was unsafe and needed significant repairs.

Ricci still planned to open for the 1985 season but decided to close for good when tensions mounted with Brigantine officials. He sold the property to a developer in April 1987 for $1 million, and the new owner planned to build a condo complex on the parking lot of the amusement facility. Demolition began in late summer 1987. A fire broke out soon after, on the morning of September 25, and what remained of the Brigantine Castle and pier were destroyed. All that remained were some pilings. A new pier was never built.

The Brigantine Castle and Amusement Pier was the most famous single attraction in the history of Brigantine Beach. On average, it employed over 35 people, attracted over a million visitors annually, and its yearly revenues were more than $2 million. 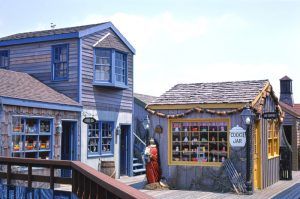