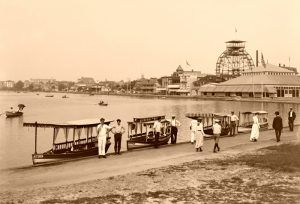 The amusement park got its start when Ernest Schnitzler created a Victorian-style Carousel House in 1888. The original 100-foot by 100-foot structure was made of wood and featured a hip roof. Inside was a beautiful carousel with hand-carved wooden horses, giraffes, camels, goats, and deer. It was first named the Kingsley Street Merry-Go-Round but was later renamed the Palace.

In 1895, the building was expanded to the west to establish a unique steam-powered Ferris Wheel. Riders embarked inside the building and were transported outside, where a short set of stairs led to a platform where they could enjoy a view of the Atlantic Ocean. The 67-foot diameter Ferris wheel and the observatory were designed by Ernest Schnitzler. The observation deck was removed when the wheel began running on electric power in the 1920s. It remained in operation until 1988, making it the oldest operating wheel in the world at that time. 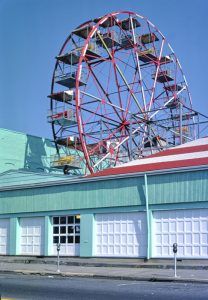 In 1903, the Crystal Maze was constructed on a 31-foot by 100-foot lot immediately west of the Ferris wheel on Lake Avenue. This two-story steel and masonry area housed both a mirrored amusement hall on the ground floor and a residence for the Schnitzler family on the upper floor.

Ernest Schnitzler owned the Palace for over 30 years before he sold it to August M. Williams. The Great Depression wreaked havoc on American amusement parks, and of more than 1,800 operating when the stock market crashed in 1929, all but 303 parks had failed by 1935. Somehow, Williams and the Palace made it through without closing.

One of the reasons for this was his hiring a designer named Nick Nichols and a Polish carpenter, who was known as Mr. D. These two created a steep, surprise-filled Fun House that rose to the eaves of the Palace roof of the Pavillion. Built at strange angles, the walk-through attraction included barrel-like rotating passages, spiraling staircases, shifting planks, air drafts that came through through cleverly hidden air holes, all of which played tricks on visitors’ equilibriums. Glass panels and lighting created spooky shadows, tilted rooms, and human-like characters suddenly appearing added to the thrill. The first dark ride at the Palace was also created on the ground floor of the Crystal Maze building, which thrilled visitors with a ride that twisted back and forth along its tracks.

In the 1930s, the Palace was sold to Edward H. Lange and Zimel Resnick, who would shape the Palace’s destiny for the next 47 years. The two quickly began to make changes by painting and sprucing up the place and, in the early 1940s, acquired a 100-foot by 30-foot area in the middle of the block, north of the rotating wheel. They installed 3,000-square feet of arcade games, but after several seasons, it was replaced with a sheet metal donkey ride, one of the strangest attractions ever at the Palace. After two seasons, the Donkey Ride was replaced for the next several seasons by a Wax Museum purchased in New York. Afterward, every free area of the Palace was filled with arcade games, including skee ball machines, pinball machines, and other popular games. 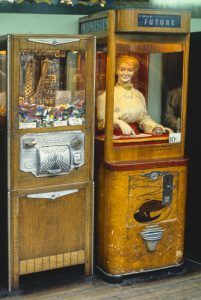 “Morgana,” a seemingly faceless mannequin provided fortunes for a price. However, once the player inserted a dime and typed in a date of birth, Morgana’s face suddenly appeared in all of its frightening glory as she spoke and told fortunes. Palace Amusements, Asbury, New Jersey by John Margolies, 1978.

Through these many changes, the carousel continued to be the premier attraction and most popular ride. Unfortunately, during an extensive restoration of the carousel in 1942, it caught fire, and 14 horses were burned beyond repair. However, new ones were ordered, and the carousel was back in action. Other rides and amusements were also introduced over the following years, including the Haunted Caves dark ride and Hell’ N’ Back.

Before 1955, there were no further expansions at the Palace as there was no place to grow, as two hotels blocked the amusement palace. However, with the opening of the New Jersey Turnpike in 1951 and the Garden State Parkway in 1955, visitors began to make daily visits to Ashbury Park rather than staying the night, and the hotels failed. Palace Amusements purchased these sites, and in 1956, the Fun House and Bumper Car Building were built to the north and the west north, respectively.

This final addition created the 36,000 square foot L-shaped amusement park, and its five amusement areas sat beneath a series of interconnected roofs. At this time, the colorful paintings of bumper cars and the neon-lighted “Tillie” face first appeared here. This was a grinning face named for George C. Tilyou, the owner of Steeplechase Park in Coney Island, New York.

After 47 years at the Palace helm, the Lange family decided to call it quits in 1985. Sam and Henry Vaccaro then bought the business. For a short while, business was good, and the crowds were large. But, within a short time, the character of the crowd changed, and many parents didn’t want their children to visit anymore. Making matters worse, during the summer of 1987, a 50-mile slick of discarded medical and hospital trash and household garbage ruined parts of the Jersey shore, and the number of visitors dropped dramatically.

But the final straw was a man named Joseph Carabetta, a big-time Connecticut developer, with whom the Vaccaro brothers had signed a contract as a minority partner. As Carabetta was gearing up to rebuild the waterfront, his activities closed the Convention Hall, putting to an end an annual series of shows and events which brought tens of thousands of visitors to the Shore. Carabetta also exercised an option in their contract that required the Vaccaro brothers to turn over their waterfront properties in exchange for a note worth more than $4 million in November 1988. The Palace closed on November 27, 1988, with no advance notice, and the Vaccaro’s were given 90 days to sell the rides and vacate. The closure cost 25-to-30 seasonal and full-time employees their jobs. 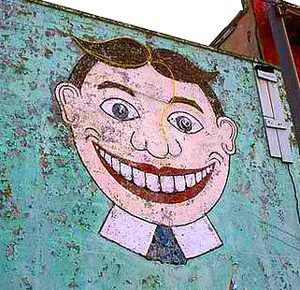 Over the next several years, the abandoned amusement park deteriorated as water damaged the structures and a substantial portion of the roof collapsed. However, the still-standing square Victorian pavilion portion of the building, which held the Palace Merry-Go-Round and Ferris Wheel, was added to the National Register of Historic Places in 2000.

Several efforts were made to save the historic structure, including its hand-carved carousel and infamous murals and decorations, but in 2004, after an independent structural inspection, the building was deemed unsafe and ordered demolished. A local grassroots organization saved several pieces from the building, including the famed Tillie mural. The building was razed in May 2004.

The Palace was located at the southern end of Kingsley Street, between Lake and Cookman Avenues in Asbury Park, New Jersey. 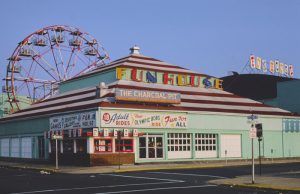