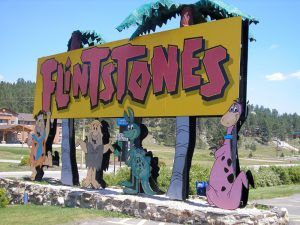 The once-popular Bedrock City Theme Park and Campground in Custer, South Dakota, entertained and welcomed thousands of visitors for almost 50 years before it was reduced to rubble in April 2019.

The 62-acre park, located on Mount Rushmore Road, opened in 1966 at the peak of the Flintstone TV show’s popularity. Six investors opened the park, two of which owned local cement plants, making a perfect match to build a Modern Stone Age town.

The Flinstones was a Hanna-Barbera cartoon that featured a modern stone-age family who seemingly lived in suburban America utilizing primitive technology for those too young to remember. The animated sitcom followed the activities of the Flinstones and their next-door neighbors, the Rubbles. It was the first animated sitcom to air on primetime TV. 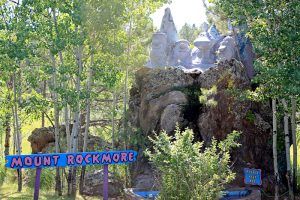 And, for years, this was true. All visitors were invited to tour Fred’s Bedrock City and walk the town’s streets for a fee. These excursions included visiting Mount Rockmore and Barney Peaks, seeing a show at the Rockmore Theatre, taking a ride on the miniature Iron-Horse train through the Wild West and Dinosaur Canyon, enjoying a ride in the Flintmobile, and unlimited time on the playground and at the arcade.

For travelers needing overnight accommodations, the park provided cabins as well as RV and tent camping. These visitors also enjoyed a heated swimming pool, mini-golf, and access to the playground and arcade.

A 20-foot-tall statue of Dino perched on a rock at the entrance, a gift shop, playground, and the Pronto Burgers Cafe were within the park. For those taking the paid tour, visitors would see several “modern buildings,” including Fred and Wilma’s house and Barney and Betty Rubble’s home, which were decorated with leopard print throws, concrete furniture painted teal, and electric blue, and framed illustrations of the families.

As visitors entered Main Street, they would see a radio station, fire department, a grinning repairman at the auto shop who perpetually waited to chisel wheels, and many storefronts and business buildings. Interiors were decorated in the style of the show and featured sculpted and animated characters going about their daily lives. At the end of Main Street was a mini Mount Rushmore with the heads of Fred Flinstone, Barney Rubble, Dino, and Mr. Granitebilt, who founded Bedrock. 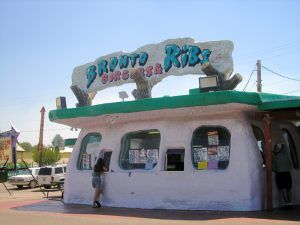 During the peak summer weeks, live characters impersonating the Flinstones and the Rubbles were often walking around the park and interacting with visitors. The buildings were painted in bright cartoon colors throughout the park, and statues and plywood cut-outs were numerous, providing multiple photo opportunities.

However, new owners took over the site over the decades, and while the Flinstones’ fame had faded, the owners faced new licensing negotiations, and Bedrock City struggled to keep up with all the changes. Ironically, though the Flintstones were not even known to many visitors, Warner Brothers demanded that images and statues conform to their standards. These changes were expensive, which couldn’t be met from the admission fees of the park.

In the end, Bedrock City in South Dakota closed in 2015. Mike Tennyson later purchased it, who attempted to work with Warner Brother, who owns the Flinstones brand, but he didn’t get a warm reception. Many of the Flinstone buildings were deteriorating, but the site reopened as the Buffalo Ridge Campground Resort. During this time, more campsites were added, and many of the Flintstone items were removed.

The entire site was bulldozed in April 2019.

The old theme park and campground were located at 422 West Mt. Rushmore Road. 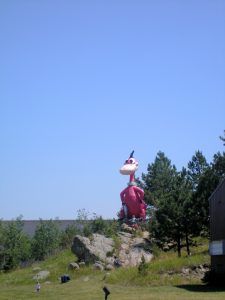