Jolly Cholly’s Funland in North Attleboro, Massachusetts once had traffic backed up for miles, but today, it is a vanished site.

What would become one of the area’s most popular amusement parks, got its start when Charles M. Nasif and his wife, Helen, opened a dairy bar at 171 East Washington Street in 1954. Nasif, who had been a ride concessionaire at Rocky Point Park in nearby Warwick, Rhode Island was impacted when that park was destroyed by a hurricane in 1938. 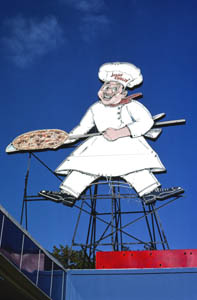 The site in Attleboro stood on swampland that was, no doubt, cheap at the time that the Nasifs built their dairy bar. Beginning with soft-serve ice cream and soft drinks, the couple soon expanded the menu to include hamburgers and the business was renamed Jolly Cholly Dairy Bar Beef Burgers. Later that year he opened a second building in which pizza and other Italian delights were served and at some point, fried clams and beer were added.

In the next years, the Nasifs expanded their site until it included 12 acres and in 1958, miniature golf was added. A year later, the Jolly Cholly Funland was built across the parking lot from his restaurants. The amusement park included a carousel, a Ferris wheel, a Kiddie Whip, children’s boats, and a roadway ride. In 1960 a roller coaster was set up and in 1965, a train ride was added. Other more adult rides were also added including the Himalaya and a dizzying Rodeo carousel-type ride that appealed to teens.

During these years, Jolly Cholly’s, with its large parking lot, attracted many teenagers how congregated on weekends. Waitresses on roller skates took orders and brought back trays of pizza, burgers, french fries, and drinks on trays that attached to car windows. Nasif eventually signed Rhode Island radio and TV personality Salty Brine into the mix, having Salty make many park appearances, and putting a plywood cutout of his likeness on the pizza building roof.

In 1965, the Nasifs also began holding flea markets on weekends. The most distinctive feature of the amusement park was a Giant Clown whose legs formed an archway that was the entrance. 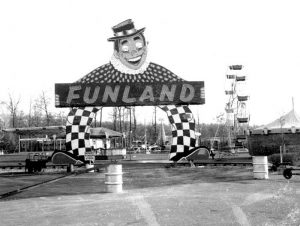 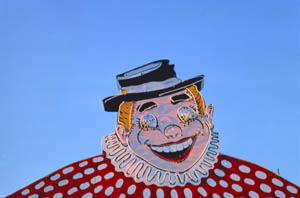 In the next years, Jolly Cholly’s transformed from a teen hangout into a place where parents brought small children.

In 1972, the Nasifs sold the 18-acre amusement and restaurant facility. The next owners renamed it The Land of Fantasy, added more adult rides, and expanded the food services. After changing hands a couple of more times, the park closed in 1981.

Today, there is absolutely nothing left of this once popular stop along Route 1, except for memories.

That “Od Guy” driving the train most of the time was Charlie Nassif himself! — Dennis

It was a fun spot and a big deal at the time. — Janet

My favorite place to go. We drove up from Providence on Saturdays. — Natalie

Spent many nights there driving around the parking lot “circle” and just hanging out. — Jeff

I loved the Himalaya! Especially when it went backward! — Karen

Riding the train at night was awesome. — Bob

Sad this is not around now… what a great time! – Christina 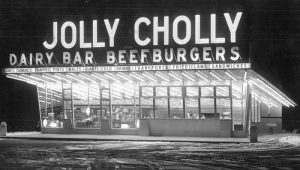