Centralia, Pennsylvania is a ghost town in Columbia County that was caused by an underground coal mine fire that has been burning since 1962.

Before settlers came to the region, this area was a vast expanse of mountain wilderness inhabited by various Indian tribes. That changed in 1749 when the Native Americans sold the land to colonials for 500 pounds. 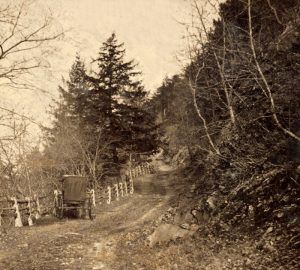 Reading Road in Pennsylvania about 1860.

In 1770, the area was surveyed and explored during the construction of the Reading Road, which stretched from Reading to Fort Augusta (present-day Sunbury.) Today, Route 61 follows much of the path of the historic Reading Road.

In 1793, Robert Morris, an American Revolution hero and signer of the Declaration of Independence, acquired about a third of Centralia’s valley land. However, just five years later, he declared bankruptcy, lost the property and was sent to debtors prison.

In 1830, Morris’ property and other tracts were purchased by a French sea captain named Stephen Girard who learned that the area was filled with coal deposits. However, the coal veins wouldn’t be actively worked in a large way for years. In 1832, Johnathan Faust opened the Bull’s Head Tavern in the area, and the settlement that grew around it was first called Bull’s Head.

In 1842, the land was purchased by the Locust Mountain Coal and Iron Company. Alexander Rae, a mining engineer, then moved his family in and began planning a village, laying out streets and lots for development. Rae initially named the town Centreville as he hoped it would become the center of commerce in the region. 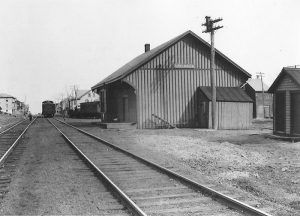 The Mine Run Railroad was built in 1854 to transport coal out of the valley. In 1856, the Locust Run Mine and the Coal Ridge Mine opened. More mines followed including the Hazeldell Colliery Mine in 1860, the Centralia Mine in 1862, and the Continental Mine in 1863. In 1865, a branch line of the Lehigh Valley Railroad was constructed to Centralia. Called the Lehigh and Mahanoy Railroad, it enabled transport and expansion of Centralia’s coal sales to markets in eastern Pennsylvania. The same year, when a post office was established, the town’s name was changed from Centreville to Centralia because there was already a town named Centreville in Pennsylvania. The town was incorporated in 1866, at which time it was called home to about 1,300 residents. 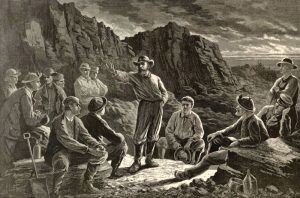 During the 1860s, the Molly Maguires, an Irish-American group who were working to organize a mine workers union to improve wages and working conditions, was active in Pennsylvania. In October 1868, Alexander Rae, Centralia’s founder, was murdered in his buggy during a trip between Centralia and Mount Carmel. Three men, who were found to belong to the Molly Maguires, were eventually convicted of his death and were hanged in Bloomsburg in March 1878. As Centralia was a hotbed of Molly Maguires activity, other acts of violence also took place, including arson and the death of the area’s first priest.

The town’s population peaked in 1890 at 2,761, at which time, it boasted seven churches, five hotels, 27 saloons, two theaters, a bank, a post office, and 14 general and grocery stores. 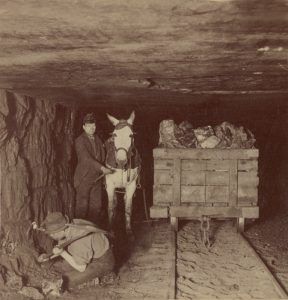 By the turn of the century, coal production had already reached its peak in Pennsylvania and mining declined. When the United States became involved in World War I in 1917, many young men left the area and the town began to decline. After the war, a series of strikes further hindered coal production.

At about the same time, new energy forms were created, including cheap fuel oil, which reduced the demand for coal. After the stock market crashed in 1929, the Lehigh Valley Coal Company closed five of its mines in the area. During the Great Depression, many desperate men turned to “bootleg mining.”

Coal production picked up with the outbreak of World War II in 1941. By 1950, the town’s population had dropped to 1,986. The same year, the Centralia Council acquired the mineral rights to the town, hoping to profit in future coal production. By 1960, the town’s population was 1,435 and though mining continued for just a few more years, all the remaining mining companies also closed. 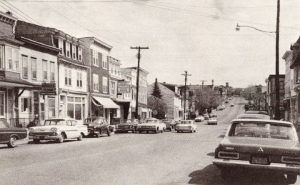 By 1962, there were still more than 1,300 people living in Centralia when the city council proposed cleaning up the local landfill in time for Memorial Day festivities. To accomplish this, the landfill, which was located in an abandoned strip-mine pit next to the Odd Fellows Cemetery, was set on fire on May 27. Five volunteer firemen sprayed water on the flames to keep the blaze under control and after the landfill’s contents were thoroughly burned, water was used to douse the flames. However, two days later on May 29th, more fires were spotted and quickly extinguished. As sporadic fires continued over the next days and weeks, firefighters investigating found a hole that provided a direct pathway to the labyrinth of old coal mine tunnels, on top of which Centralia was built. 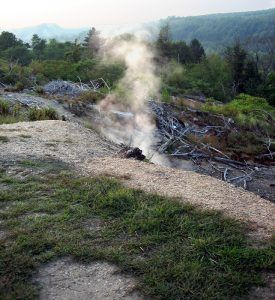 Smoke seeps from the ground in Centralia, Pennsylvania, courtesy Wikipedia.

To stop the underground burn, water was pumped directly into the mine tunnels and the surface was covered with clay in an attempt to smother the blaze. But nothing worked. When there weren’t active above ground fires, residents could still see and smell the smoke from the burn, some of which was toxic with unsafe carbon monoxide levels.

Larger projects were later taken on, including large-scale excavation to dig out the trenches to expose the fire so it could be extinguished. However, with the large amount of earth that needed to be moved, the project ran out of funding. A second plan involved flushing out the fire by using a mixture of crushed rock and water. However, this plan failed when extremely cold temperatures caused the water lines to freeze. This attempt to stop the burn also failed when it ran out of money. By then, the fire had spread by 700 feet.

With coal mining discontinued and the population falling, rail service ended in 1966 and the tracks were removed the following year.

In the meantime, the underground fire continued to burn and hundreds of people still lived in the community when locals became aware of the scale of the problem in 1979. At that time, then-mayor and gas-station owner, John Coddington, inserted a dipstick into one of his underground tanks to check the fuel level. When he withdrew it, it seemed hot and then lowered a thermometer into the tank to quickly discover that the temperature of the gasoline in the tank was 172 degrees. By the next year, the population of Centralia had dropped to just about 1,000 people. 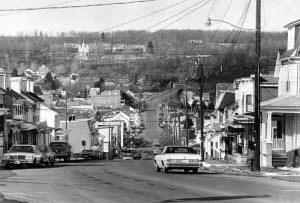 Afterward, statewide attention to the fire began to increase, especially after a 12-year-old boy fell into a four feet wide by 150 feet deep sinkhole that had suddenly opened in his backyard. Though the boy was saved, the plume of hot steam billowing from the hole was tested and found to contain a lethal level of carbon monoxide.

Though it was obvious that the fire posed a threat to the town and its residents, Centralia’s citizens were split as to the amount and type of risks posed by the fire.