When the beautiful Pennsylvania Station began to be demolished in 1963, it caused international outrage. Photo by Cervin Robinson, 1962. 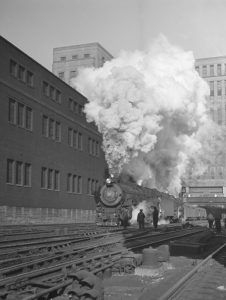 Pennsylvania Station, in New York City, was built during the Golden Age of railroading when its owners intended the terminal not only to serve the specific needs of the railroad but also to embellish the city as a monumental gateway. Also known as Penn Station, it was named for the Pennsylvania Railroad, its builder and original tenant.

The construction of Pennsylvania Station was one part of a large building program undertaken in 1903 by the Pennsylvania Railroad Company. Included in this program was the construction of tunnels under the North River, which enabled Pennsylvania Railroad trains to enter Manhattan directly from New Jersey for the first time. The ornate station was designed by McKim, Mead, and White and would be considered a masterpiece of the Beaux-Arts style and one of the great architectural works of New York City. Because the trains entered on tracks below ground level, the architects did not follow any of the more common architectural forms for a railway station and designed instead, a rather low, colonnade facade.

“In appearance, it is a wide departure from the conventional railway station. One misses the turrets and toilers and more than all the lofty arched train-shed, but as the principal function of this train shed is performed underneath the streets, the outward and visible signs of the ordinary railway station are naturally absent.” 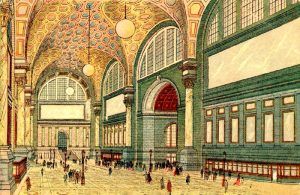 The rich sequences of spaces in the terminal culminated in the great concourse with its glass and steel roof. The design of the main waiting room was reputedly based on the Roman Baths of Caracalla. From a planning standpoint, the station was important for its separation of various forms of transportation on different levels and for the convenience of its many entrances and exits to the city.

When complete, the station occupied an 8-acre plot bounded by Seventh and Eighth Avenues and 31st and 33rd Streets in Midtown Manhattan. The station contained 11 platforms serving 21 tracks, which enabled direct rail access to New York City from the south for the first time. It was one of the first stations to include separate waiting rooms for arriving and departing passengers. At that time, it was among the city’s largest public spaces.

Part of Penn Station was opened on September 8, 1910, and on November 27, 1910, the station was fully opened to the public and began operating from the terminal on a regular schedule.

“A work of which they may be justly proud, for not only will it be a lasting monument to their genius, perseverance, and energy, but it will serve as an inspiration to the city of New York for the erection of other equally worthy public buildings and will be for all time to come, a tangible object lesson for members of the architectural and engineering profession who may have the good fortune to be called upon to execute work of a similar kind.” 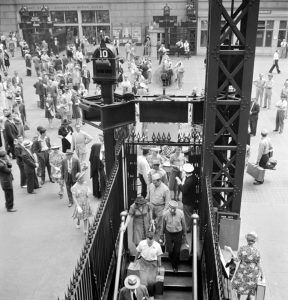 In the next decades, scores of intercity passenger trains arrived and departed daily to Chicago, Illinois and St. Louis, Missouri and beyond, on connecting railroads to Miami and the west. A side effect of the tunneling project was to open the city up to the suburbs, and within 10 years of opening, two-thirds of the daily passengers coming through Penn Station were commuters.

By 1945, the station peaked with more than 100 million passengers traveling through each year. However, by the late 1950s, the volume of intercity rail passengers had declined dramatically due to the Interstate Highway System and airplane travel. By this time, the station was beginning to show wear and it was very expensive to maintain. A renovation around this time covered some of the grand columns with plastic and blocked off the spacious central hallway with a new ticket office.

The Pennsylvania Railroad also sold the air rights, which called for the demolition of the head house and train shed. Plans for the new Pennsylvania Plaza and Madison Square Garden were announced in 1962.

In exchange for the air rights to Penn Station, the Pennsylvania Railroad received a smaller underground station at no cost and a 25% stake in the new Madison Square Garden Complex. Though architects and historians rushed to save the ornate building, they were unsuccessful and demolition of the above-ground head house began in October 1963. The demolition of the Penn Station head house was controversial and caused outrage internationally. The controversy over the demolition of such a well-known landmark and its deplored replacement galvanized the modern historic preservation movement. Afterward, new laws were passed to restrict such demolition. 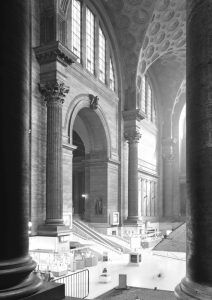 Over the next six years, the below-ground concourses and waiting areas were heavily renovated, becoming the modern Penn Station, while Madison Square Garden and Pennsylvania Plaza were built above them. The sole remaining portions of the original station are the platforms and tracks at the station’s lowest level, as well as scattered artifacts on the mezzanine level above it.

Today Pennsylvania Station is the main intercity railroad station in New York City and the busiest in the Western Hemisphere, serving more than 600,000 passengers per weekday. Completely underground, it is located in Midtown South beneath Madison Square Garden, between Seventh and Eighth Avenues and between 31st and 33rd Streets, with additional exits to nearby streets. A passenger rail line connects New York City with Boston, Philadelphia, Washington, D.C., and intermediate points. Intercity trains are operated by Amtrak, which owns the station, while commuter rail services are operated by the Long Island Rail Road and New Jersey Transit.

The Pennsylvania Railroad does not exist today either. Established in 1842, it became the largest railroad, the largest transportation enterprise, and the largest corporation in the world by 1882. In 1968, it merged with its rival, New York Central Railroad to become the Penn Central Transportation Company, which filed for bankruptcy within two years. Today, many of its old assets are owned by the Norfolk Southern Railway and Amtrak. 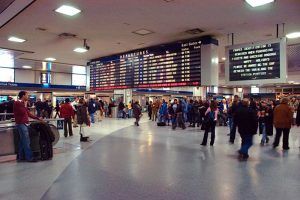