The Aztec Motel in Albuquerque, New Mexico in 2005 by Kathy Weiser-Alexander.

The Aztec Auto Court in Albuquerque, New Mexico was the first motel constructed on East Central Avenue, which later became historic Route 66. Up until 2011, when the building was razed, it was the oldest continuously used motel in Albuquerque making it one of the most important Route 66 icons.

Constructed in 1933, four years before Central Avenue became Route 66, the Aztec Auto Court was an example of the Southwest Vernacular style with a stepping parapet, a setback second story, and viga-like porch supports. The motel had a rough stucco finish and small flat-roofed stucco porches. 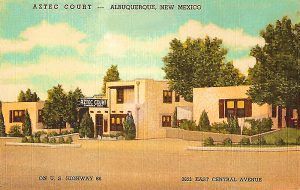 A postcard from the Aztec Court’s early days. 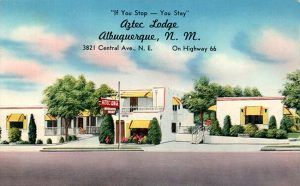 The property initially consisted of two building units constructed parallel to each other to form a linear courtyard. Originally, the auto court had three carports adjacent to the motel rooms. During a 1950s remodeling, the garages were walled in to create more guest rooms, which increased the number of units from 13 to 17. The office/residence was located at the front of the property, protecting much of the courtyard from the street. During this remodeling, a metal canopy with wrought iron support posts was installed over the office entry and a new neon sign replaced the original. 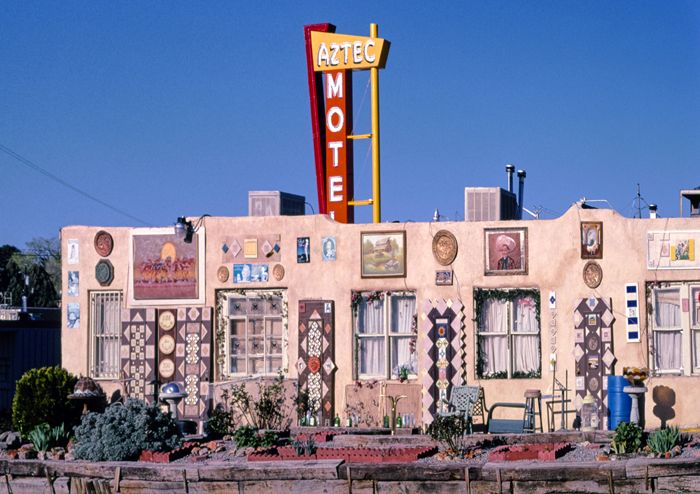 The motel changed hands a number of times over the years. When Interstate 40 bypassed Central Avenue, the booming business of the auto court faltered dramatically, and the motel fell into disrepair and disrepute, becoming a haven for prostitutes and drug dealers. In 1991, however, a new owner purchased the Aztec.

With patience, hard work, and creativity, the new proprietor brought the motel back to working condition as a short- and long-term-stay motel. It’s exterior was updated dramatically in a unique way by a retired professor who lived there part-time. She added decorative elements such as velvet paintings, plastic flowers, and other ornaments to the exterior walls, making the old motel stand out to Route 66 travelers. One visitor called the “architectural art” of the Aztec, “a cross-cultural mélange of broken pottery, old coins, and disparate figurines — all ordered in a manner too artistic to be random, too creative to be mass-produced.” The Aztec then became a unique work of art.

The Aztec was listed in the National Register of Historic Places in 1993 as one of the best examples of a relatively unaltered pre-World War II tourist courts on Route 66 in New Mexico. In 2003, the Aztec received cost-share grant funds from the National Park Service Route 66 Corridor Preservation Program to restore the neon sign. This project was part of a larger effort supported by the National Park Service, the New Mexico State Historic Preservation Office, and the New Mexico Route 66 Association to restore nine neon signs on New Mexico Route 66. This project sparked a revival of neon across Route 66. 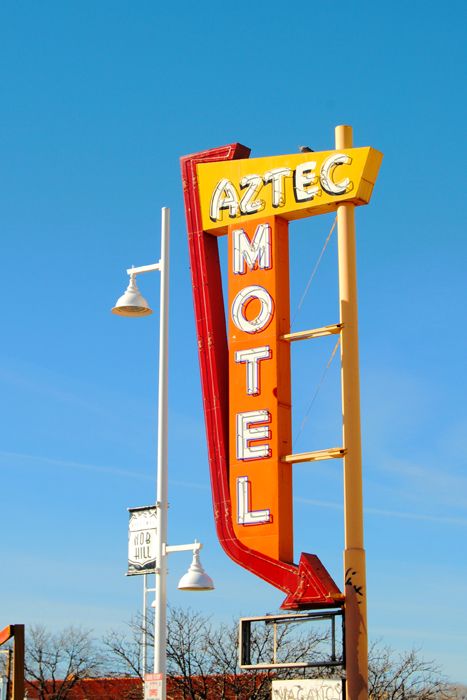 For a number of years the old auto court, then known as the Aztec Motel continued to serve Route 66 travelers. It was sold to a development company in 2006, who had serious intentions of renovating the building. Though one might wonder about their intentions, the company had already purchased and renovated two other historic motels on Route 66. However, when they brought in architects and engineers to determine the best renovation strategies, they found that the historic auto court could not be renovated in any way that could be profitable.

Even though the building was on the national and state historic registers, it was demolished in 2011. It was 79-years old. Today, all that remains is an open space and the motel’s historic neon sign.