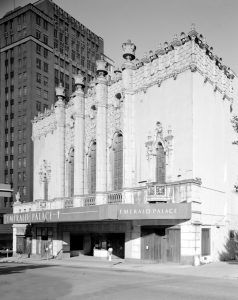 The beautiful Fox Theatre, once located at 7th Avenue and Olive Street in downtown Seattle, Washington, was described as being “fairy-like in appearance” when it opened on April 19, 1929.

The theatre was designed by architect Sherwood D. Ford and was initially planned to be called the Mayflower, so some of the grillwork had a nautical design of a ship prow. However, just six months before it was completed, it was purchased by Hollywood mogul William Fox, who was expanding his theater holdings throughout the United States. Fox preferred a Spanish baroque style, so the decor underwent several design changes following the sale. When it was complete, it looked a little like a fortress with exterior stonework fashioned “in the Spanish Plateresque manner” with heavy timbered front doors flanked on both sides by suits of armor.

The interior was decorated in a 16th-century Spanish tradition with red carpet, green and rose drapes on the walls, and stone that appeared to be weathered. On the stairway landings, large painted murals depicted scenes of Spanish warriors in battle and in the mezzanine, were regal furnishing with seatbacks that were 10 feet high. Although the house’s policy was to screen talking pictures, the owners still installed one of the most expensive pipe organs in the city, even though this element of motion pictures was fast falling by the wayside. The theatre could hold 2,600 patrons and opened with the film Broadway Melody. But the luster of the theatre would fade quickly due to the timing of when it was built. It was the last major entertainment venue to open in the city before the 1929 stock market crash occurred just six months after it opened. 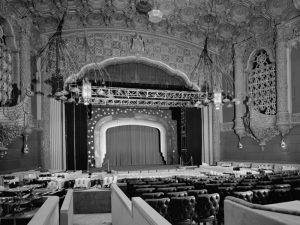 Stage at the Fox Theatre in Seattle, Washington by the Historic American Building Survey, 1991.

Afterward, William Fox was badly hurt in an automobile accident, and the stock market crash severely decreased his fortune. He lost control of the Fox Film Corporation in 1930 during a hostile takeover, and a government antitrust action forced him into a protracted seven-year struggle to fight off bankruptcy. He was soon forced to sell his theatres, and Seattle businessmen Claude Jensen and John von Herberg bought the Fox Theatre in Seattle in 1933 and rechristened the venue “the Roxy.” However, they operated it only for a year before leasing it to vaudeville impresario and movie exhibitor John Hamrick who renamed it “Hamrick’s Music Hall.” In 1936, it sold again to the Clise Family, who shortened the name to the Music Hall, by which it was known into the 1980s.

The theater was not a huge moneymaker for the Clise Family. It was located downtown outside the traditional retail/entertainment core, but the theater managed to weather the economic climate and continued showing motion pictures into the 1960s. In 1962, Sterling Theaters took over the venue’s management, but the Music Hall would have several openings and closures over the next several years. In 1967, it was renamed the 7th Avenue Theatre. 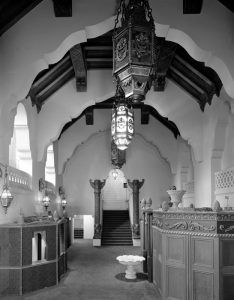 Foyer at the Fox Theatre in Seattle, Washington by the Historic American Building Survey, 1991.

However, by the mid-1970s, suburban multi-plex cinemas had siphoned off most of the business for single-screen theatres located in the downtown area. At this time, many Seattle theaters were either threatened or torn down. At this time, activists began working to save the remaining structures, and in 1977 the Music Hall was granted landmark status.

However, the Clise Family argued in front of Seattle’s City Hearing Examiner that the protection of these buildings created undue financial burdens on the property’s owners. The Hearing Examiner sided with the Clises, but they did not tear down the building immediately and leased it to Jack McGovern in 1978, at which time the venue dispensed with films and featured a Las Vegas-style floorshow with dinner. Unfortunately, just two years later, McGovern filed for bankruptcy. Afterward, it sat empty for several years until it reopened as the Emerald Palace, briefly serving as a dinner theater.

In 1989, the Clise Family tried to convince the Seattle Symphony to relocate to the Music Hall as their permanent home, but the symphony rejected the idea. Afterward, the Clise Family applied for a city permit to demolish the building, planning to erect a more profitable building. However, in 1990, the city designated the building as a landmark, resulting in a battle between the owners and historic preservationists. In the end, the Clines persevered, and the Music Hall was demolished in January 1992.