Residents of flood-stricken Times Beach, Missouri have been dumping their ruined household goods in the city park, which private tests have shown is contaminated with hazardous chemical dioxin. (AP Photo/James A. Finley, December 1982)

Times Beach, Missouri, once a popular stop along Route 66, is now a ghost town and the site of the Route 66 State Park in St. Louis County. Once home to more than 2,000 people, the town was completely evacuated 1983 due to dioxin contamination. 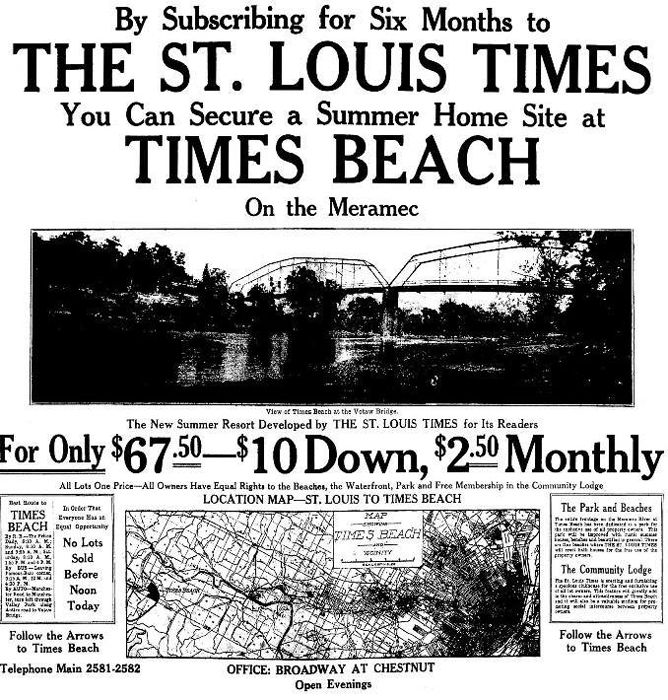 Times Beach was founded in 1925 as a summer resort just prior to Route 66’s designation as a federal highway. That year, the St. Louis Star-Times newspaper purchased a triangular parcel wedged between the Meramec River (northeast) and Frisco Railroad tracks (west) near the present Meramec River Bridge. In an effort to boost its lagging subscriptions, the newspaper company subdivided the property into 6,000 lots measuring 20 x 100 feet each and sold single lots with newspaper subscriptions for $67.50. Buyers could purchase the lots with just $10 down and a $2.50 monthly installment. Focusing primarily on St. Louis residents, the investors touted the potential for summer homes just 17 miles away from downtown St. Louis. Times Beach developed as a popular weekend and summer recreational area over the following decade. Prone to flooding, many of the town’s first buildings were built on stilts.

Route 66 was designated through Missouri in 1926 and plans were soon made to reroute it through St. Louis. The route re-assignment required a modern bridge to serve the automobile traffic crossing the Meramec River, which was constructed in 1931-1932. The 1009-foot-long 30-foot-wide steel Warren deck truss bridge still stands today.

However, the town began to transition into a permanent community during the Great Depression when many property owners found it necessary to reside year-round in the small homes erected as weekend and vacation cottages. 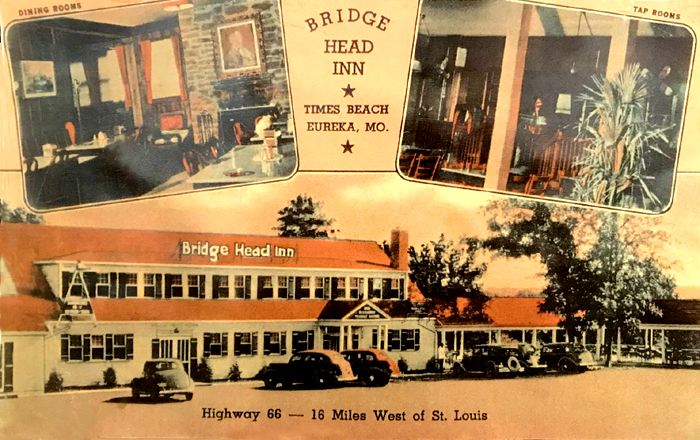 The Bridgehead Inn in Times Beach, Missouri opened in 1935. It later served as Steiny’s Inn until 1972. Today, the building is used as the Route 66 State Park Visitor’s Center.

The Bridgehead Inn opened in 1935 and became a haven for gambling and other illicit activities. The population of Times Beach grew during the 1940s when road improvements made commuting more practical and there was a serious housing shortage in St. Louis. Following World War II, all hopes for a summer resort were dashed due to gas rationing and the town developed into a lower-middle-class city. However, people still enjoyed the area’s recreational area flanking the river which was known as Sylvan Beach and provided picnicking, swimming, and boating.

In 1947, Edward Steinberg took over the Bridgehead Inn, cleaned it up, and ran Steiny’s Inn here until 1972.

Route 66 and the Meramec River Bridge enhanced the area’s growth and in 1956, an auxiliary bridge was built for eastbound Route 66 traffic to the south of the 1931 bridge.

By the late 1960s, construction of Interstate 44 had begun and traffic was permanently rerouted to the 1956 bridge relegating the Meramec River U.S. 66 Bridge to local traffic. 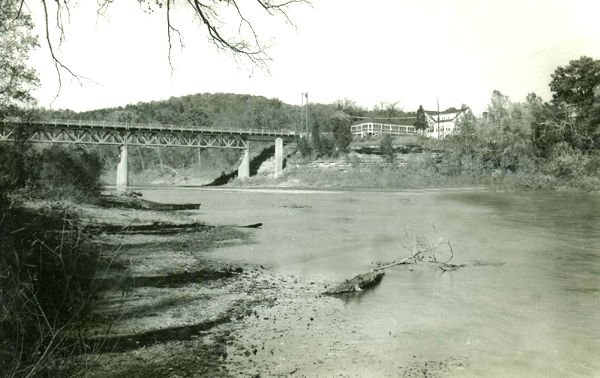 In the early 1970s, the town could not afford to pave its many dirt road streets and was plagued with a dust problem. To solve the dilemma, the city hired waste hauler Russell Bliss to oil the roads in the town. For four years between 1972 and 1976, Bliss sprayed waste oil on the roads.

Bliss had first used the technique of spraying waste oil to control dust in horse stables. When, in 1971, spraying resulted in the death of 62 horses, the stable owner automatically suspected Bliss of contaminating the stables. However, Bliss assured them that it was simple engine oil that he was spraying.

What the city and the stable owners didn’t know is that Bliss had subcontracted to haul waste for the Northeastern Pharmaceutical and Chemical Company (NEPACCO) who operated a facility in Verona, Missouri. During the Vietnam War, this facility had been a producer of Agent Orange and the waste clay and water removed from the plant contained levels of dioxin some 2,000 times higher than the dioxin content in Agent Orange. Bliss would later claim he was unaware that the waste contained dioxin. In the meantime, he was spraying the dirt roads of Times Beach, as well as area horse stables, with the lethal material. 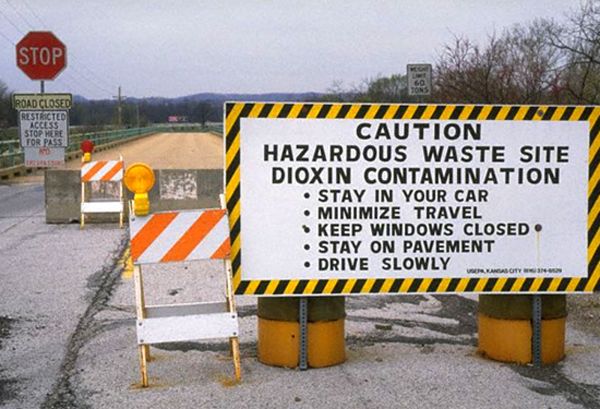 As horses continued to die at area stables, the owners contacted the Center for Disease Control and Prevention who began an investigation in 1979. When a NEPACCO employee confessed that the company handled dioxin, the government sued NEPACCO in 1980.

The EPA began to visit Times Beach in 1982, taking samples and tests that identified dangerous levels of dioxin in Times Beach soil. In December 1982, the Meramec River flooded, further spreading the contamination through the town and other areas. On December 23, citizens were informed the entire city was contaminated. Soon, panic spread and every illness and animal deaths were attributed to dioxin. President Ronald Reagan formed a dioxin task force to study the effects of the chemical and in early 1983; the EPA announced the town’s buyout for $32 million dollars.

Two years later, in 1985, the entire population of more than 2,000 residents had been evacuated, with the exception of one elderly couple who refused to leave, and the town was dis-incorporated by executive order of the Missouri Governor. The entire site was quarantined as residents moved on to other areas. But for the residents who moved, the scare was not over, as they continue to worry about the contamination effects on their long term health. Furthermore, with the wide press coverage at the time, the former Times Beach residents were shunned by their new neighbors, who feared the contamination. It was the largest civilian exposure to dioxin in U.S. history. 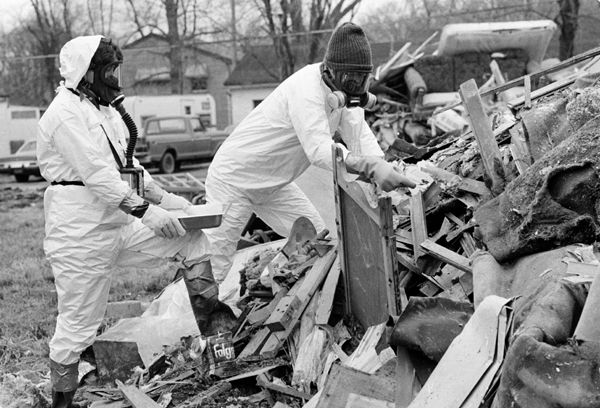 Thousands of lawsuits were filed against Bliss, NEPACCO, and its subcontractors. Though Bliss’ practices were questioned, he was never implicated or convicted of a crime. As to the lawsuits involving the chemical companies, no laws were in effect that regulated the disposal of hazardous waste at the time of the disposal.

For years after the evacuation, the site sat silently behind barricades protecting the curious public from the toxic threat, while the Federal Government decided what to do.

During the years of 1996 and 1997, the government removed 265,000 tons of contaminated soil and debris from Times Beach and 28 other sites in eastern Missouri at a cost of $110 million dollars. An incinerator was built on the Times Beach site by a company called Syntex, which was the parent company of NEPACCO. After the soil was incinerated, the incinerator was dismantled and the site was turned over to the State of Missouri.

The 1983 buyout of the town by the federal government was the first time such a thing had ever occurred in our nation. The Times Beach tragedy brought dioxin to national attention and the EPA continued to locate and clean-up dozens of other toxic waste dumps throughout the nation. It also provided the push to pass new environmental laws regulating waste disposal. 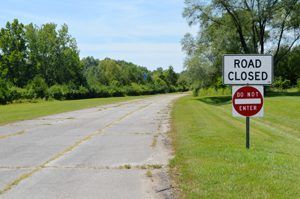 Old Route 66 through the Route 66 State Park at the former site of Times Beach, Missouri by Kathy Weiser-Alexander.

Though dioxin has been connected to cancer, skin diseases, immune disorders, and birth defects, the long term effect on the exposed residents is still unknown.

After the site was turned over to the State of Missouri with the EPA’s assurance that the land was safe, Missouri began to make plans for the site and the idea of the Route 66 State Park began to take shape.

The 419-acre Route 66 State Park opened in October 1999. Today the park includes a chunk of old Route 66 including the historic bridge across the Meramec River. The visitor center, housed in a 1935 roadhouse that was once called Steiny’s Inn, features a museum on the historic highway, as well as the history of Times Beach and the environmental cleanup.

The park itself provides more than seven miles of trails for hiking, biking, and equestrian use, where visitors can see a multitude of wildlife including turkey, geese, deer, and more than forty species of birds. Picnic sites abound and a boat ramp provides easy access to the Meramec River. The Route 66 State Park is located on I-44 at exit 266.

After visiting the Route 66 State Park, you will continue on the Mother Road through Eureka on your way to the Pacific area. While in Eureka, you can visit the Six Flags Theme Park for a wild roller coaster ride, or check out the Wild Canid Center, a breeding facility for endangered wolves from around the world. 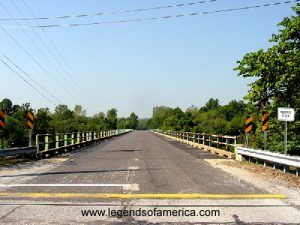 Old Route 66 bridge over the Meramec River in the Route 66 State Park was still open in  September 2004, by Kathy Weiser-Alexander. 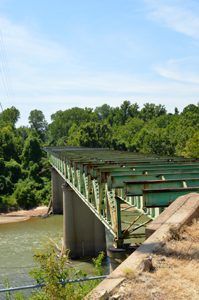 The 1932 Meramec River Bridge closed in 2009 due to safety reasons. Funds are being raised to save the bridge today. By Kathy Weiser-Alexander, 2019. 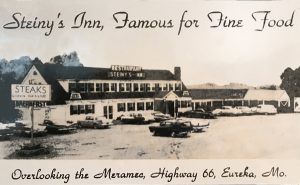 A postcard from the 1950s shows Steiny’s Inn in its heydays of Route 66. 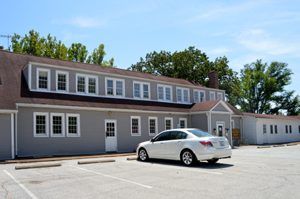 The site of the once-popular restaurant now serves as the Route 66 Park Visitor Center by Kathy Weiser-Alexander.