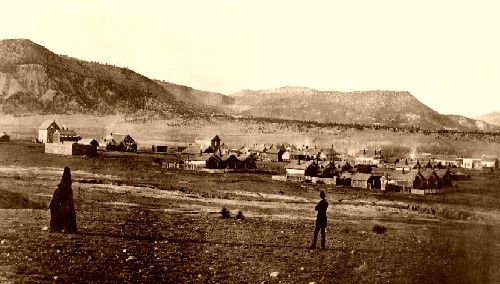 David “Davy” Crockett was a gunman, outlaw, and the nephew of the more famous Davy Crockett of Alamo fame. A native of Tennessee, he made his way to Texas, where he would soon end up in prison. However, he escaped in 1872 and made his way to the Cimarron, New Mexico area where he worked on a ranch.

There, he endeared himself to the likes of Clay Allison, as both men were from Tennessee and shared a dislike of the black troopers stationed at Fort Union. During this time, Cimarron was a wild town in the midst of the Colfax County War.

Crockett soon became the town’s bully and along with his ranch foreman, a mean customer named Gus Heffron were regulars at the bars and gambling halls. Though the 23-year-old Crockett was a little arrogant, he was well-liked until the night of March 24, 1876, when he got drunk and turned deadly. 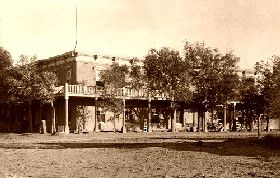 According to the story, Crockett, Heffron, and a man named Henry Goodman had been making the rounds in Cimarron that evening. Ready to call it a night, they stopped at Lambert’s Saloon (now known as the St. James Hotel) to pick up a bottle of whiskey for the road. As Crockett started out of the saloon, he had trouble opening the door because someone was trying to open it outside, making the drunken Crockett angry. When he finally got the door open, he faced a soldier from the U.S. 9th Cavalry, the black cavalry unit known as Buffalo Soldiers.

Crockett was said to have pulled his gun and killed the man, then turned his gun on three more black troopers at a card table in the bar, killing two of them. Crockett and Heffron ran out of town on foot because their horses were stabled in a barn where the Buffalo Soldiers were camped. Crockett insisted that putting uniforms on former slaves was adding insult to injury. Appearing before the justice of the peace, Crockett was acquitted of the murders because he was drunk, the court fining him just $50 and court costs on a reduced charge of carrying arms.

After getting away with the murders, Crockett became even more arrogant, and his antics intolerable. Over the next several months, he and Heffron ran roughshod over Cimarron riding their horses into stores and saloons, firing their guns into the air and ceilings, and forcing people at gunpoint to buy them drinks.

Tired of the two bullies’ antics, Sheriff Rinehart deputized Joseph Holbrook, a Cimarron-area rancher, and John McCullough, the town’s postmaster, to go after the lawless pair. On the night of September 30, 1876, the three men, armed with double-barreled shotguns, hid near Schwenk’s barn. About 9 p.m., Crockett and Heffron approached the barn on horseback, when Holbrook revealed himself and told the two to raise their hands. Crockett just laughed and told Holbrook to go ahead and shoot, and much to Crockett’s surprise, Holbrook did just exactly that.

Sheriff Rinehart and McCullough also fired blasts at the two men, startling their horses, who bolted and galloped a quarter mile or so north across the Cimarron River. Heffron, who was not hurt badly, kept riding, but Crockett’s horse stopped on the other side of the river. Crockett’s hands were locked in a death grip on the saddle horn and had to be pried open. A short time later, Heffron was arrested but escaped on October 31, 1876, into the Colorado mountains, never to be seen again. 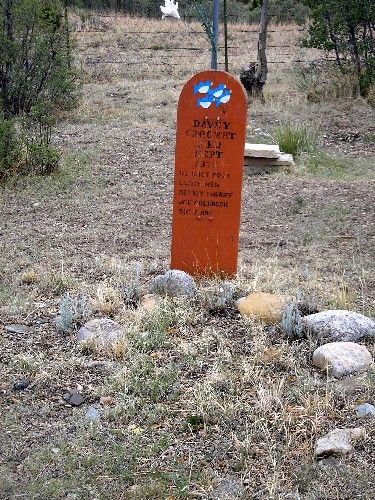 While this story is the one most often told, another version is held by the Crockett family decedents. In response to an article that appeared in the Albuquerque Tribune in 1976, a Crockett descendant responded with a different version that has been passed down through the generations.  According to Andrew Jackson Crockett, a nephew of Davy Crockett, Rinehart wanted Crockett’s horses for his own use and accused Davy of being a horse thief. Afraid to arrest Crockett alone, Rinehart asked the cavalry to arrest him. When four Buffalo Soldiers confronted Crockett, one drew a gun, and Davy killed three of them.

Later, Andrew Crockett said that Sheriff Rinehart and another man lay in ambush for Davy and, one day, as he was leaving town, shot him in the back. Crockett was buried in the Cimarron cemetery, but for years, no marker existed, and the grave has long been lost. Today, another marker has been erected; however, it is unknown if it was placed at his actual burial location.