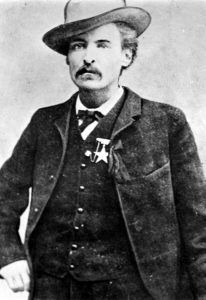 Timothy Isaiah “Longhair Jim” Courtright was a gunfighter and lawman in Ft. Worth, Texas, who was killed in a gunfight with Luke Short.

Born in Sangamon County, Illinois, little is known of Courtright’s early life. He served with the Union army during the Civil War and then drifted around until he finally settled in Fort Worth, Texas. While there, he served at various times as a jailer, deputy sheriff, hired killer, private detective, and racketeer. He was the first elected marshal of Fort Worth in 1876 — tasked with keeping the peace in what had become known as Hell’s Half Acre, the town’s wild red-light district. Briefly, Courtright left Texas and served as marshal of Lake Valley, New Mexico’s flourishing silver mining town, in 1882. However, in 1883 he was back and appointed as a deputy U.S. Deputy Marshal, but became a fugitive after his posse killed two ranchers.

Later, he grew tired of running and turned himself in, though he was acquitted of any wrongdoing. By 1887, Courtright was running the T.I.C. Commercial agency in Fort Worth, Texas, which provided “protection” to gambling dens and saloons in return for a portion of their profits. In the meantime, Luke Short, a former friend of Courtright’s, had set up the White Elephant Saloon, and Jim was trying to get Short to utilize his services. But the Dodge City gunfighter told Courtright to “go to hell,” he could do any gunslinging necessary to take care of his business.