Canyons of the Ancients National Monument

The American Southwest is rich in Native American and Spanish History.

Bents Fort – Situated on the north bank of the Arkansas River in southeastern Colorado, this non-military fort was one of the most significant outposts on the Santa Fe Trail, and as the principal outpost of American civilization on the southwestern Plains, it was instrumental in shaping the destiny of the area.

Canyons of the Ancients National Monument – Located in southwestern Colorado, the Saddlehorn Pueblo along the Sand Canyon trail contains a huge number of archaeological sites—more than 6000 recorded so far, and up to 100 per square mile in some places — representing Ancestral Puebloan and other Native American cultures.

Escalante Ruin – The Escalante Pueblo was a compact village on a hilltop overlooking the Dolores River in southwest Colorado. Archaeologists believe it was occupied three different times, based on tree-ring dating of the wood used in its construction. Ancestral Pueblo people built the main complex in  1129 AD and lived there for at least nine years. The Spanish explorers, Atanasio Domínguez and Silvestre Vélez de Escalant, made note of this site in 1776 during their trek across the Southwest.

The architecture and masonry indicate that Escalante Pueblo was one of the northernmost settlements influenced by the culture of Chaco Canyon, New Mexico, about 100 miles south. Some archaeologists speculate that such villages were part of an interdependent system spread across the Four Corners area. Escalante may have been a gathering place for religious or social activities of people in the smaller surrounding villages.

The pueblo is a rectangular block of about 28 rooms surrounding a kiva (a round subterranean room probably used for religious purposes). Other rooms were used as work areas, sleeping quarters, and storage. These rooms are larger than those typically found in the local region, and their walls were made of parallel faces enclosing a rubble fill core — both features typical of Chacoan construction. Lowry Pueblo is another nearby Chaco-style site.

About 1150 AD, after a short abandonment, Escalante pueblo was briefly reoccupied by people from the local Northern San Juan branch of the Ancient Puebloan tradition. A final occupation, also by the Northern San Juan people, was very short and occurred sometime around 1200 AD.

Escalante Pueblo is on the Anasazi Heritage Center grounds at the end of a 1/2 mile long trail. The center is located in Delores, Colorado.

Fort Lyon – Fort Wise, established just west of Bent’s New Fort, was built in 1860 and named for Henry Wise, governor of Virginia. That same year, the U.S. Army leased from William Bent, his fortification, which consisted of 12 rooms surrounding a central courtyard. Bent’s New Fort buildings were used as a commissary for the fort as well as housing the Upper Arkansas Indian Agency. The post served as an important military link on the Santa Fe Trail between Fort Leavenworth, Kansas and Fort Union, New Mexico. 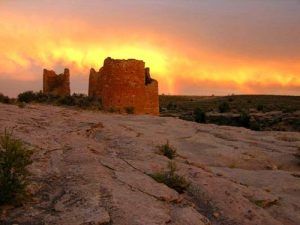 Hovenweep National Monument – Protecting six prehistoric pueblo villages in a twenty-mile expanse of mesa tops along the Colorado–Utah border, Hovenweep National Monument is noted for its solitude and undeveloped, natural character. The name Hovenweep was bestowed on the region by explorer and photographer William Jackson in 1874.  It is a Ute word meaning “deserted valley,” referring to numerous small river valleys that feed into lower McElmo Creek and the San Juan River.

Mesa Verde National Park – Mesa Verde, Spanish for “green table,” rises high above the surrounding country of southwest Colorado, providing a spectacular look into the lives of the Ancient Puebloan people who made it their home for over 700 years, from 600 A.D. to 1300 A.D. The National Park, containing 52,073 acres, protects over 600 cliff dwellings and 4,000 known archeological sites, only a few of which have been excavated.

Old Spanish National Historic Trail – Not nearly as well known as the Oregon or Santa Fe Trails, the Old Spanish Trail was a contemporary of these two more famous trails but was primarily a trade route rather than an emigrant trail, as the path was too rough for wagons. Put together with pieces of previous routes utilized by the Indians and explorers, this extension of the Santa Fe Trail from Missouri to New Mexico connected Santa Fe with California, playing a major factor in the development of the southern part of the state.

Raton Pass – Raton Pass, at the border of present-day New Mexico and Colorado, was one of the most important, yet treacherous, segments of the Mountain Branch of the Santa Fe Trail. The pass cut through the snow-capped Sangre de Cristo Mountains, allowing wagons access to the vast western territory. Shorter routes were eventually developed, but Raton Pass, which crossed safer terrain, remained in use. The pass played a critical role in General Stephen Watts Kearny’s conquest of Santa Fe and the eventual American annexation of New Mexico in 1846.

Santa Fe National Historic Trail – The Santa Fe Trail is significant to the history of what became the State of Colorado. When legal trade began in 1821, over half of the land now comprising Colorado was under Mexican ownership; the other half was unorganized territory. Southeastern Colorado’s dramatic landscape inspired the name for one of the main routes of the trail; the Mountain Route became especially important as the railroads moved into the state. Both the Mountain and Cimarron Routes of the Santa Fe Trail crossed the southeastern corner of Colorado, though the Cimarron Route traversed approximately only 14 miles of Baca County. In contrast, the Colorado segment of the Mountain Route was much longer, totaling 181 miles. This route crossed present Prowers, Bent, Otero, and Las Animas counties before entering New Mexico.

Trujillo Homesteads – The Trujillo Homestead is a historic ranch site in Alamosa County, Colorado, not far from the Great Sand Dunes National Park. The area was first settled in the 1860s by Teofilo Trujillo, a Mexican sheep farmer. His son Pedro built a log cabin house beginning in 1879, along with other ranch outbuildings and structures. In 1902 the elder Trujillo’s home was destroyed by fire during conflicts between English-speaking cattle ranchers and the Spanish Trujillos, who were by then major landowners in the area. The Trujillos sold their holdings, which became part the Medano Zapata Ranch, now owned by the Nature Conservancy. The homestead area, including the surviving homestead and the ruins of the destroyed one, was declared a National Historic Landmark District in February 2012.