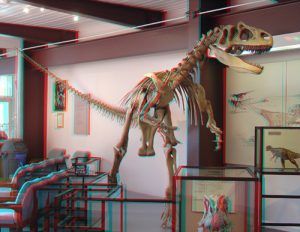 Allosaurus, on display in the Dinosaur Quarry Visitor Center

Dinosaur National Monument’s cultural history dates back 10,000 years when the Yampa and Green Rivers provided water for survival in an arid country. Located on the border between Colorado and Utah on the southeast flank of the Uinta Mountains, most of the monument area is in Moffat County, Colorado.

The monument protects a large deposit of fossil bones from these huge animals that lived millions of years ago. The fossils that give the monument its name were discovered in 1909 by Earl Douglass, a paleontologist who worked for the Carnegie Museum of Pittsburgh, Pennsylvania. Douglass knew that some of the rocks in northeastern Utah were the same kind that had produced dinosaur skeletons elsewhere, so he went there hoping to find more bones for the museum.

What he found, however, were thousands of them and spent many years digging them up and shipping them to Pittsburgh, where many skeletons are now on display. President Woodrow Wilson heard about the great dinosaur quarry that Douglass had established and proclaimed the site as the Dinosaur National Monument in 1915. Years later, the National Park Service began to develop the quarry as it is today. The rock layer containing the fossil bones forms one wall of the Quarry Visitor Center. Paleontologists have carefully chipped away the rock on this wall to uncover the bones and leave them in place. More than 1,500 fossil bones can now be seen in this unusual exhibit.

The reason why there are so many bones at Dinosaur National Monument is that the rock around them is made up of sand and gravel, much like what you might see along a large river. Such a river flowed through this area 150 million years ago, and the many dinosaurs that lived near it sometimes died near the river. During rainy seasons, the river overflowed its banks and picked up some of the dead dinosaurs lying nearby, and their bodies were carried by the river and deposited in the main channel.

As millions of years passed, the river vanished as other rivers and seas came and went, leaving layer after layer of sand and mud that slowly solidified into rock. Even the buried bones became as hard as rock, as water seeping through the ground filled them in with dissolved minerals. Later still, strong vise-like forces began squeezing the Earth’s crust in this area, bending and tilting the rock layers. But the more that the rocks were pushed upward, the more they were worn down by rain, snow, frost, and wind –layer after layer. Finally, some of the long-buried dinosaur bones began to show up near the top of a steep hill, and Earl Douglass found them.

The bones found in the Quarry belonged to eleven kinds of dinosaurs, including allosaurus, stegosaurus, sauropods, ornitholestes, and others. More than half of all the different kinds of dinosaurs that lived in North America in the late Jurassic Period are found in the Dinosaur National Monument Quarry. While the main exhibit wall of dinosaur fossils is closed, some fossils can be seen by hiking ½ mile from the Visitor Center.

The Dinosaur Quarry is located in Utah just to the north of the town of Jensen. The nearest communities are Vernal, Utah and Dinosaur, Colorado. Also seen are numerous Indian petroglyphs and pictographs, providing evidence that many people have come before us. The Fremont Indians lived in the canyons in Dinosaur National Monument 800-1,200 years ago. During the Fremont Expedition, the land was inhabited by the Ute and Shoshone Indians, who are still found in the area today.

Early settlers left their mark on the landscape with their homesteads. Those who had access to the rivers and a constant water flow survived, while others dried up with drought and moved away. Now, many of the remains of homesteads are found alongside the Indian artwork of the past. Camping, white-water rafting, and guided tours are also available at the park. 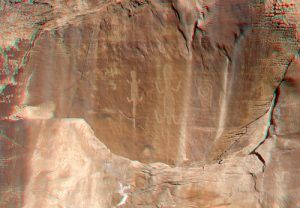