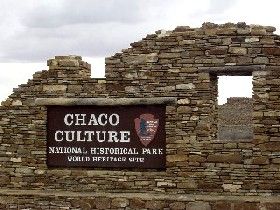 Preserving one of America’s most significant cultural and historic areas, the Chaco Culture National Historical Park is remarkable for its distinctive architecture, numerous ruins, and ancient roads. The remote and isolated park is located in northwestern New Mexico, between Albuquerque and Farmington, in a relatively inaccessible valley cut by the Chaco Wash.

Once home to the Ancient Puebloans, Chaco Canyon was a major center of ancestral Puebloan culture between 850 and 1250 A.D.

By 1000 A.D. the Chaco culture had firmly established a spiritual, political and economic center serving the Four Corners area. It is estimated that the region was called home to as many as 5,000 people living in approximately 75 settlements scattered throughout the canyon. 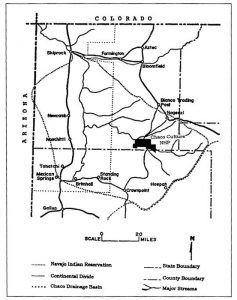 In addition to its remarkable public and ceremonial buildings, the Ancient Puebloans built numerous roads, ramps, dams, and mounds, which required a great deal of well organized and skillful planning, designing, resource gathering, and construction. The distinctive architecture combines a number of designs, astronomical alignments, geometry, landscaping, and engineering to create an ancient urban center that continues to amaze archeologists and visitors a thousand years later.

Archeological evidence suggests that the Ancient Puebloans had been occupying the area as early as 1200 B.C. when they survived as nomadic hunters and gatherers, hunting with wood clubs, hunting sticks, and spears. Some three centuries later, they began to make more permanent homes in caves and pit houses where they constructed numerous woven baskets that were covered with mud and baked to make waterproof containers. Archaeologists identify these first people as Basket Makers.

About 700 A.D. the Ancient Puebloans began cultivating crops, such as corn and squash, and building permanent dwellings. These small, one-storied, masonry structures were the beginning of what would become the great pueblos of the southwest. 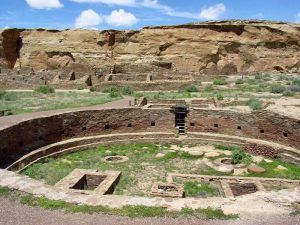 Some two centuries later, as their population grew, the communities expanded into larger, more closely compacted pueblos. It was around this time that the Pueblo Bonito complex was built, beginning with one curved row of rooms near the north wall.  Continuing to refine their building techniques, the use of thick masonry walls and the generous use of mud mortar allowed walls to rise to more than four stories in height.

During this time, the Chacoans quarried sandstone blocks and hauled timber from great distances, assembling 15 major complexes that remained the largest buildings in North America until the 19th century. Many of these buildings are thought to have been aligned to capture the solar and lunar cycles, which would have required generations of astronomical observations and centuries of skillfully coordinated construction.

More pueblos, including Chetro Ketl, Una Vida, Penasco Blanco, Hungo Pavi, and Kin Bineola were also started at about this time. Some large buildings show signs of being planned from the start, in contrast to the usual Ancient Puebloans custom of adding rooms as needed. For the next two centuries, more and more of these large pueblos with oversized rooms began to be built throughout the region. Eventually, there were an estimated 75 villages in the area, tied together by an extensive system of roads.

From the 12th to the 13th centuries, many of the pueblos in Chaco Canyon were abandoned when a long cycle of drought began in the San Juan Basin beginning in about 1130. The Ancient Puebloans were at their height of civilization when the lack of rainfall led to food storages. Even though they had designed an extensive system of dams and irrigation methods, the dry climate and overtaxed fields could no longer support the immense population. As famine spread throughout the area, the people began to leave, joining other pueblos near the Little Colorado River and the Rio Grande. 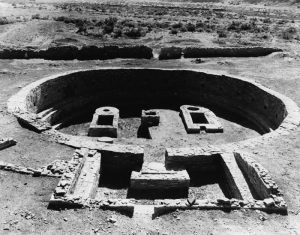 Some archaeologists now believe that other factors, such as religious upheaval, internal political conflicts, and warfare may have also contributed to the abandonment. By the 1300s, all of the villages and pueblos of Chaco Canyon were abandoned. As the ancient Indians left, their kivas were ceremonially burned and most of their possessions were left behind.

Today, their descendants are members of 20 Indian tribes in New Mexico and Arizona and many maintain their connections with Chaco today. These tribes include modern-day Pueblo Indians of New Mexico, the Hopi of Arizona, and the Navajo.

By the 1600s, the Navajo people primarily occupied the canyon. in 1680, the Pueblo Revolt against the Spanish briefly unified the Pueblo peoples of New Mexico and their neighbors. However, the Spanish returned in 1692 and re-conquered the area, which forced many of the Pueblo peoples into exile. Many of these people sought refuge with the Navajo people in Chaco Canyon and the surrounding area. These people intermarried and exchanged ideas.

1774 Don Bernardo de Miera y Pacheco, identified the Chaco Canyon area as “Chaca” on a Spanish map and in 1823 Jose Antonio Viscarra, the Spanish Governor of New Mexico, led a military force west of Jemez Pueblo onto Navajo lands. He noted many Chacoan buildings along the route.

The first American expedition into the area was led by Colonel John M. Washington in 1849. During the trip, Lieutenant James Simpson, of the Army Corps of Topographical Engineers, surveyed Navajo lands and wrote reports of the Chacoan sites while the Kern brothers drew illustrations of the buildings. In 1877, artist and photographer, William Henry Jackson, with the US Geological and Geographical Survey, produced expanded descriptions and maps of Chacoan sites, in addition to identifying additional structures including a stairway in the cliffs.

More expeditions and archeologists followed in the next decades. Chaco Canyon National Monument was established on March 11, 1907, by Theodore Roosevelt. In 1949, the University of New Mexico deeded lands in Chaco Canyon National Monument to the National Park Service, in exchange for continued rights to conduct scientific research in the area. By 1959, the National Park Service had constructed the park visitor center, staff housing, and campgrounds. In the 1970s, a number of research projects, archaeological surveys, and limited excavations began which provided extensive information about the ancient Ancient Puebloans.

Archeological excavations in Chaco Canyon today are limited, as modern methods such as remote sensing now allow archaeologists to gather a great deal of information without disturbing the fragile and irreplaceable sites. 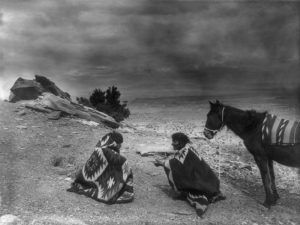 In December 1980, an additional 13,000 acres were added to the park. To protect Chacoan sites on adjacent Bureau of Land Management and Navajo Nation lands, the Park Service developed the multi-agency Chaco Culture Archaeological Protection Site program. The sites are part of the sacred homeland of Pueblo Indian peoples of New Mexico, the Hopi Indians of Arizona, and the Navajo Indians of the Southwest, all of whom continue to respect and honor them.

The Ancient Puebloans built numerous great houses, kivas, and pueblos throughout a nine-mile stretch of the canyon floor, perched on mesa tops, and situated in nearby drainage areas.

From the Visitor’s Center, a nine-mile paved loop accesses five major Chacoan sites, where self-guiding trails are available. Trail guides are also available in the parking lots of the sites, or in the bookstore. Each site usually takes 45 minutes to one hour to complete. 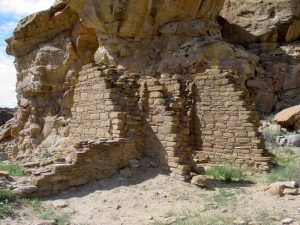 Casa Chiquita: This unexcavated village, located near the old north road to the entrance of the canyon, is thought to have been built around 1100 A.D. This village contains fifty rooms and three kivas, originally standing two or three stories high. A trail beginning at Casa Chiquita follows an old wagon road down the Chaco Wash leading to Peñasco Blanco. Along this trail, numerous rock art and historic inscriptions can be seen on the cliff face on the north side of the trail.

Casa Rinconada:  On the south side of Chaco Wash, almost directly across from the Pueblo Bonito, stands the largest known great kiva in the park. The great subterranean kiva, with no surrounding residential or support structures, was once utilized for religious activities and ceremonies. Casa Rinconada one had thirty nine-foot passageways from the underground structure to above ground levels.  The trail leading to the great kiva passes several villages.

Chetro Ketl:  Located about 1/4 mile southeast of Pueblo Bonito, Chetro Ketl is one of the largest pueblos in Chaco Canyon.  Construction of the pueblo is believed to have begun in 1020 A.D. and continued over the next three decades. The immense elevated earthen plaza, rising above the surrounding landscape, is estimated to contain 500 rooms and 12 kivas, including one great kiva within the central courtyard. The 500-foot long rear wall once supported five stories of rooms, the lower of which were utilized for storage, while the upper rooms contained living quarters.  The walls are embedded with wooden beams, thought to have been carried from distant forests. The structure was abandoned by 1120. In the cliffs behind the ruin are ancient stairways that lead to prehistoric roadways to Pueblo Alto and other outlying communities.