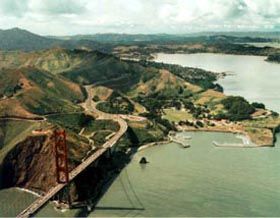 Fort Baker, California, started when President Millard Fillmore set aside the Lime Point Military Reservation in 1850 to establish a strong defense fortification across from Fort Point. However, due to difficulties in acquiring the land and the interruption of the Civil War, it wasn’t until 1868 the construction began with the blasting of the cliffs to prepare a shelf near sea level similar to that of Fort Point. However, it was never completed. Instead, several batteries were constructed on the ridge above, including Point Cavallo, Cliff, Ridge, and Gravelly Beach Batteries between 1872 and 1876.

However, in 1890, plans began to be drawn up for more modern batteries, stretching along the northern shore from Point Cavallo westward to Point Bonita. Construction soon began on the Spencer, Kirby, and Duncan Batteries, and in 1897, the military reservation was renamed Fort Baker. 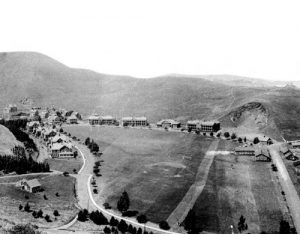 The first garrison was encamped in tents, but construction began in 1901 on the first of several permanent buildings. Over the next decade, the army built many new state-of-the-art fortifications, including the Mendell and Alexander Batteries, buildings, barracks, officers’ residences, a post headquarters, and a 12-bed hospital. Most of the original Fort Baker buildings were designed in the Colonial Revival architectural style, often characterized by large, stocky symmetrical buildings with classical elements, such as columns, wrap-around porches, and decorative windows.

The soldiers’ barracks represented the army’s new interest in providing its soldiers with a healthier environment. Unlike the dark, cramped, and often infested 119th-century frontier barracks, the large and well-ventilated barracks at Fort Baker provided clean running water, ample interior space, and modern indoor toilet facilities. The post also contained important recreational facilities like a gymnasium, a reading room, a post exchange (which functioned as both a small-scale store and lunchroom), and even a bowling alley. 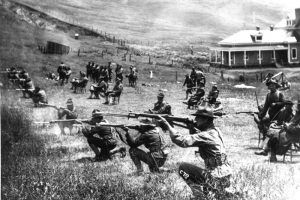 In 1910, the Fort Barry military post was established, and by the 1930s, Fort Baker, Fort Barry, and eventually Fort Cronkhite became part of the Harbor Defenses of San Francisco.

During World War II, the Harbor Defenses of San Francisco, tasked with guarding the harbor with underwater minefields and shore batteries, constructed a mine depot at Fort Baker. By 1942, Fort Baker included some 159 buildings; after World War II, it was decommissioned as an active military post but was retained by the army as part of the Presidio of San Francisco, which continued to utilize many of the buildings. 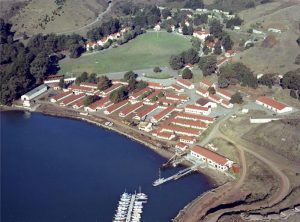 The final uniformed soldiers left the Presidio of San Francisco and Fort Baker when the 91st Division (Training Support) and an Army Reserve unit moved its headquarters from Fort Baker to Parks Reserve Forces Training Area in Dublin, California.

Many old fort buildings still stand as part of the Golden Gate National Recreational Area. The buildings include barracks, officers’ quarters and residences, the hospital, post headquarters, and the gymnasium. Also located here are an active United States Coast Guard station, the Travis Marina, and the Bay Area Discovery Museum. 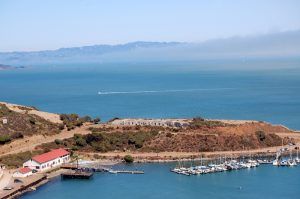