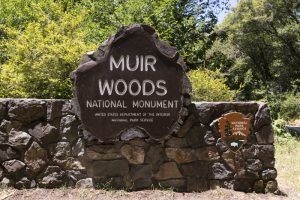 Muir Woods National Monument, located on Mount Tamalpais on the Marin Peninsula north of  San Francisco, California, is part of the Golden Gate National Recreation Area. The monument protects 554 acres of old-growth redwood forest, one of a few such stands remaining in the San Francisco Bay Area. Designated the country’s tenth National Monument in 1908 by President Theodore Roosevelt, it was the first federal or state park established in the region. 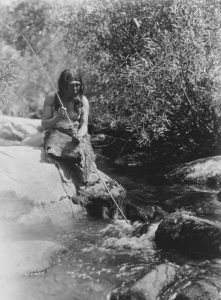 Prior to European settlement of the Marin Peninsula in the early 19th century, Muir Woods and the surrounding lands of Redwood Canyon were part of the homeland of the Coast Miwok people. Little archeological evidence has been found on habitation in Redwood Canyon. The Indians most likely used the area for hunting, fishing, and gathering and considered the redwood forest a part of their home. In the early 19th century, soon after establishing Spanish missions at present-day San Rafael in about 1817, the Coast Miwok people were decimated by European disease. By 1840, their population was reduced by an estimated 90%.

In 1836, much of the Marin Peninsula, including Redwood Canyon, had been granted by the Mexican government to William Antonio Richardson, who named the land “Rancho Sausalito.” Richardson maintained most of the ranch as open grazing lands, although forested areas were logged, particularly after the California Gold Rush of 1849. In 1856, Richardson sold most of Rancho Sausalito to Samuel R. Throckmorton, who rented out subdivided parcels to farmers. Throckmorton retained a large unsubdivided area encompassing Redwood Canyon and extending north to the upper reaches of Mount Tamalpais as his private hunting preserve. Although most of the remaining redwood groves on the Marin Peninsula were logged during Throckmorton’s ownership of Rancho Sausalito, he chose to retain the forest in Redwood Canyon. In 1883, Throckmorton died and left his debt-ridden estate, which included 14,000 acres of the ranch, to his daughter, Susanna Throckmorton. 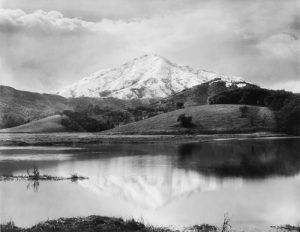 Unable to pay off her father’s debts, Susannah Throckmorton sold Rancho Sausalito in 1889 to the Tamalpais Land & Water Company, which set about plans to develop the ranchlands along the east side of Marin County into the community of Mill Valley. On the west side, the company continued to rent out the subdivided ranch lands but retained Samuel Throckmorton’s hunting preserve, including Redwood Canyon, as undivided lands and granted their use to the Tamalpais Sportsman’s Association. With the help of one of their prominent members, William Kent, the club cared for the redwood forest through the turn of the century during a time of increasing visitation. Much of this increased activity had resulted from development in the region by the Tamalpais Land & Water Company and rail access to the summit of Mount Tamalpais. 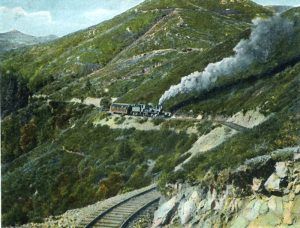 By the turn of the century, development pressures increased, including a proposal to dam Redwood Creek and destroy part of the redwood forest. At the same time, local conservation and hiking groups began to press for public acquisition of Mount Tamalpais. These pressures and his conservation sensibilities led William Kent to acquire 612 acres of Redwood Canyon in 1905 to safeguard its redwood forest and improve its accessibility to the public. Together with Mill Valley and the Mt. Tamalpais Scenic Railway, Kent developed Redwood Canyon into a public park with rail access, improved road access, and visitor amenities such as footpaths, bridges, and benches, all designed in a rustic style that was typical for parks and forested landscapes at the time. An inn at the terminus of the mountain railway, which formed the main entrance to the park, was also planned as part of the improvements. 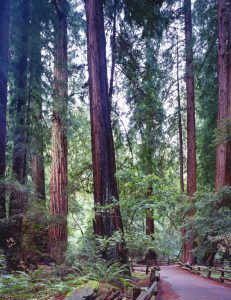 In the fall of 1907, a year after the great earthquake in San Francisco raised the demand for water supply and timber, a private water company, the North Coast Water Company, filed condemnation proceedings for the takeover of 47 acres of William Kent’s Redwood Canyon tract to build a reservoir. The building of the reservoir would have flooded the upper portion of the canyon floor, requiring the logging of many of the giant redwoods, dividing the park into two separate parts, and destruction of improvements made by Kent and the mountain railway. To circumvent the condemnation proceedings and secure the long-term preservation of the redwood forest, Kent gifted 298 acres of his 612-acre Redwood Canyon tract to the federal government on December 26, 1907, a gift that excluded the terminus of the mountain railway. On January 9, 1908, the 298-acre tract was declared a National Monument by President Theodore Roosevelt. Kent chose the name Muir Woods National Monument after the noted wilderness preservationist, John Muir, who lived in Martinez across the San Pablo Bay from Marin County. Muir had no known association with Redwood Canyon aside from a visit he had made there in 1904, nor had Kent met Muir at the time. 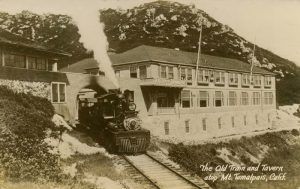 The Tavern of Tamalpais was the summit destination of the rail line. The Tavern had overnight accommodations, a restaurant, a post office, and a dance pavilion, all a short walk from the mountain’s peak.

Despite the monument designation, the North Coast Water Company continued with its legal suit for another year but dropped it. Muir Woods National Monument was managed through the General Land Office within the Department of the Interior up until 1917. A few improvements to Muir Woods during this time, but it was managed mainly by the mountain railway and William Kent. In 1917, the management of Muir Woods was transferred to the National Park Service, created by Congress the year before to improve the management of federal parks then administered by a wide array of agencies. For the next decade, the National Park Service took the lead in the management of Muir Woods, although the mountain railway and William Kent continued to play critical roles. The administration was carried out through Yosemite National Park and regional park offices in San Francisco. In 1921, William Kent donated 150 acres for the expansion of the monument. Improvements during this time included the addition of signs, an entrance gate, new footbridges, a residence for the custodian, and comfort stations, all designed according to a particular rustic style developed by the National Park Service and employed at other forested parks in the region. A parking area was also formed at the south entrance on lands belonging to William Kent, with access from the Muir Woods Toll Road, which had been built by Kent and the mountain railway in 1925. 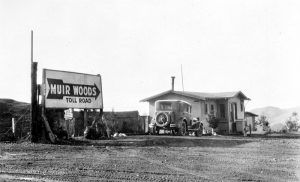 In 1928, William Kent died, coinciding with the financial decline of the mountain railway due to automobile competition. A fire in 1929 destroyed the branch line to Muir Woods and the Tavern of Tamalpais at the top of the mountain. The following year, the railway went out of business. With the closure of the railway, the main entrance to Muir Woods shifted almost entirely to the automobile entrance at the south end of the monument. Kent’s death and closure of the mountain railway gave the National Park Service full charge for the administration of Muir Woods. Much of the land bordering Muir Woods that William Kent had owned became part of Mount Tamalpais State Park, established in 1930. Beginning in 1933 and lasting through 1941, the Civilian Conservation Corps undertook extensive improvement work in Muir Woods and the state park, based out of a camp located on the railway terminus. Many of these improvements to Muir Woods were built to accommodate increasing visitation, which had jumped markedly with the Muir Woods Toll Road opening in 1925 and adjoining Panoramic Highway in 1928. 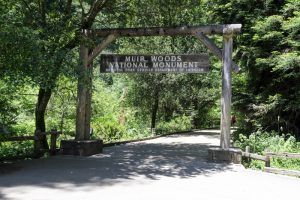 The completion of the Golden Gate Bridge in 1937 swelled visitation even more. Work by the Civilian Conservation Corps, designed mainly by National Park Service regional architects and landscape architects, included massive log footbridges over Redwood Creek, a stone-faced arch bridge over Fern Creek, a log entrance gate, improved trails, a redesigned parking area at the south entrance on state parkland, new signs and picnic facilities, and several new buildings, all designed in a romantic rustic style employing features such as log construction, exposed timber framing, hand-hewn signs, and naturalistic plantings. In 1940, the largest building at Muir Woods to date — the Administration-Concession Building — was completed in a streamlined rustic style that departed from the earlier development in the monument.

By the early 1950s, visitation ballooned after a period of relative stability during the 1940s. These large increases in visitation to Muir Woods led to significant crowding that strained the improvements made by the Civilian Conservation Corps, which had suffered due to lack of maintenance and funding during the war and post-war years. This situation set the stage for a new era of development, coinciding with broad shifts in design, natural resource management, and planning throughout the National Park System. In 1956, NPS launched a ten-year improvement program, which included removing development from within the woods, building a visitor center and employee housing, expanding parking, and acquiring additional land for park support. 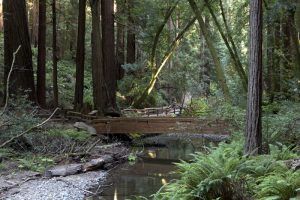 A bridge in Muir Woods today by Carol Highsmith.

The 1970s saw the expansion of Mount Tamalpais State Park to encompass nearly all of the land surrounding Muir Woods and the creation in 1972 of a metropolitan, regional park system, Golden Gate National Recreation Area. Muir Woods was incorporated into this new park system.

The monument is open every day of the year from 8:00 a.m. to sunset to visitors with a fee. To protect the area, the National Park Service has launched a parking and shuttle reservation system. To book your trip to Muir Woods, visit GoMuirWoods.com or call 1-800-410-2419.

There is no camping or lodging in the park, and pets are not permitted. The monument is located 11 miles north of the Golden Gate Bridge 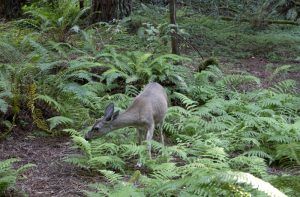 A deer in Muir Woods, California by Carol Highsmith.