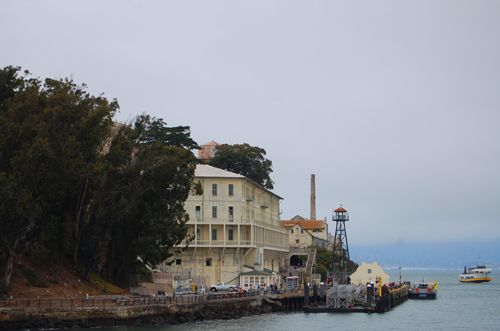 The first Confederate threat to California occurred in March 1863 when the army learned that a group of southern sympathizers planned to overtake San Francisco Bay. Their strategy was to arm a schooner, use it to capture a steamship, blockade the harbor, and attack the fort. However, when the schooner’s captain bragged about the scheme while drinking in a tavern, the news was quickly relayed to Union officials. On the night the schooner was set to sail, the U.S. Navy seized the ship and arrested the crew. When the boat was towed to Alcatraz, the army found cannons, ammunition and 15 more men hidden in the ship.

During the Civil War, Alcatraz’s role as a military prison increased. When the Confederates were arrested from the schooner, they joined numerous other military prisoners and local civilians who had been arrested for treason. Soon the rooms in the guardhouse were filled and a temporary wooden prison was built in 1863 just north of the guardhouse. Later it was replaced with several adjoining structures called the Lower Prison. Built by jailhouse labor, as part of their punishment, the prisoners also constructed additional housing on the island. 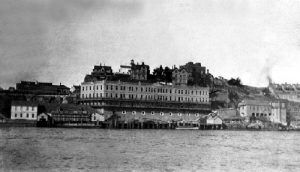 As the Civil War continued on, the U.S. Army devoted more resources to Alcatraz, and in 1864, the first 15-inch Rodman cannons were mounted. Additional “bombproof barracks” were also built. By the time the Civil War ended in 1865, the island contained over one hundred cannons. However, the only time they would be used was during the official mourning salute during San Francisco’s honorary funeral procession for President Lincoln.

After the Civil War, Confederate sympathizers caught celebrating the death of President Lincoln were sent to Alcatraz along with other military convicts and various malcontents of society. It was also after the war that thousands of emigrants began to flood to the west, creating the Indian Wars of the late 1800s. At this time, Indians were often utilized by the cavalry as scouts and those convicted of mutiny or other crimes, were sent to Alcatraz, housed side by side with some of the worst murderers, rapists, and criminals in the West. Other Native Americans who thwarted the U.S. Government were also sent to the “Rock. The first Native American to be sent to Alcatraz was a man named Paiute Tom, who was transferred from Camp McDermit in Nebraska on June 5, 1873. Two days later, he was shot and killed by a guard. The reason for the transfer and the killing have been lost in history.

Later that same year, two Modoc Indians by the names of Barncho and Sloluck were sent to Alcatraz. Arrested for participating in the murder of members of a peace commission during the Modoc Wars of northeastern California, they had been sentenced to hang, along with four other Modoc Indians. Convicted at Fort Klamath, Oregon, President Ulysses S. Grant spared the two because of their youth and sent them to Alcatraz. While at Alcatraz, Barncho died of tuberculosis, but Sloluck was released in February 1878 and joined the remaining members of his tribe exiled in Indian Territory.

Other Native Americans, accused of mutiny, Indian campaigns against the army or escapees from other prisons were also sent to Alcatraz. One such prisoner, Chief Kaetena, a compatriot of Geronimo, was sent to Alcatraz after battling against General George Crook’s army. After having spent two years on the rock, he was released in March of 1886, at which time Crook wrote, “His stay on Alcatraz has worked a complete reformation in his character.” 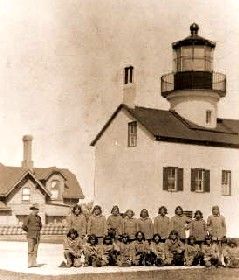 Hopi inmates at Alcatraz Island pictured in front of the original lighthouse.

In January 1895, the largest number of American Indians were sent to Alcatraz from northern Arizona. Nineteen Hopi leaders, who had been involved in land disputes with the government and refused to comply with mandatory government education programs for their children, were severely punished by sending them to the “Rock.” A San Francisco newspaper of the time, The Call, stated the Hopi “have been rudely snatched from the bosom of their families and are prisoners . . . until they have learned to appreciate the advantage of education.” Only after the Hopi had pledged to “cease interference with the plans of the government for the civilization and education of its Indian wards,” were they released.

Throughout the late 1800s, the prison complex housed an average of 100 men. During this time, the old cannons were gradually removed and by 1891, only seven remained.

During the Spanish-American War of 1898, thousands of troops passed through San Francisco on their way to or returning from the Philippines. Upon their return, many of the soldiers brought back tropical contagious diseases and San Francisco’s hospitals filled. Many of these soldiers returned as prisoners and Alcatraz’s hospital was also packed with men who had contracted diseases, a number of which died of their illnesses. During this time, four prisoners tried to paddle their way to the mainland on a butter vat, only to be returned to the island along the strong currents. 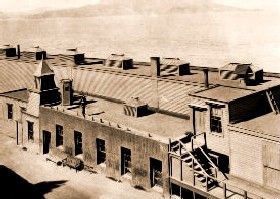 By the turn of the century, the prison’s population had swelled to more than 400 and another prison complex was hastily built on the parade ground.

Called the Upper Prison, it consisted of three wooden cell houses with two tiers each, surrounded by a stockade fence. Over the next several years, additional support buildings were added to the Upper Prison and the Lower Prison was converted into workshops for prison labor.

Both the Upper and Lower Prisons were firetraps, and in 1902, an oil lantern fire almost destroyed the Lower Prison. In 1906, when the earthquake hit San Francisco, burning much of the city, officials evacuated 176 city prisoners to Alcatraz for nine days. Recognizing the fire hazards of Alcatraz, new concrete barracks were soon built by prison labor. 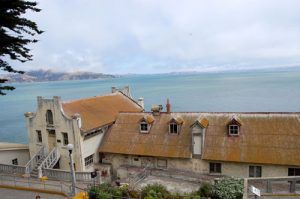 As the ships of the U.S. military became more and more powerful, the defensive purposes of Alcatraz became obsolete. In 1907, Alcatraz was re-designated as the “Pacific Branch, U.S. Military Prison” and prison guards replaced infantry soldiers.

New projects soon began to accommodate the many military prisoners and during World War I, the prison housed German prisoners of war. The upper citadel was torn down and a huge cell house was built over the citadel basement and moat. The new cell house, completed in 1912, was the largest reinforced concrete building in the world at the time, containing four cell blocks with a total of 600 cells, each with a toilet and electricity.

In 1915, the island was renamed the “Pacific Branch, U.S. Disciplinary Barracks” and a new emphasis was put on education and rehabilitation. Those convicted men with less serious offenses soon began to attend military training, remedial education, and vocational training. The plan was so successful, that many of the soldiers were restored to active duty after their sentences were served. Prisoners with more serious offenses were not given these opportunities and were dishonorably discharged from the Army after having served their terms.