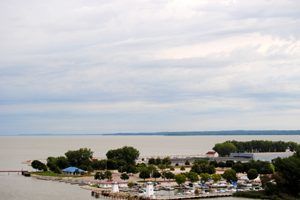 As The quest of Christopher Columbus for a short route to the Indies led to the discovery of a continent, so the search for a short highway to the fabled riches of China and Japan — the Cathay and Zipango of Marco Polo — brought an intrepid discoverer to the heart of that continent, Wisconsin. Here mingle the waters that through devious channels later flow in opposite directions — some swelling that vast volume that pours from the mighty Mississippi River into the Gulf of Mexico at the rate of twenty million of millions cubic feet of water annually; others passing through the chain of lakes into the St. Lawrence River, then into the frozen regions of the North Atlantic.

It was a period when the great highways of commerce were those provided by nature — the rivers and the lakes. The upper Mississippi River had not been discovered and nothing was known of the vast continent that stretched westward. Men believed that a few days’ journey would take them to its limits — perhaps to China. When the pioneer white man steered his frail birch-bark canoe along the western shore of Green Bay, he thought he had reached China. His coming occurred in the year 1634. This was two years before Roger Williams founded his Rhode Island colony; but, a year after the beginnings of Connecticut were made; only 27 years after the founding of the first permanent English settlement, that at Jamestown, Virginia, and but 14 years later than the landing of the Pilgrims at Plymouth Rock in Massachusetts.

A Parisian mail carrier’s son was the first white man to step upon Wisconsin soil. The year was 1634, and King Louis XIII reigned as monarch of France. Thus, by the law of nations relating to new discoveries, the son of Mary de Medici became the first sovereign of Wisconsin.

Jean Nicolet entered what now has become known as the Old Northwest through its natural gateway, the great arm of Lake Michigan that bears the name Green Bay. A hundred years before, the French had sailed up the St. Lawrence River and started their first settlement in Canada. Rigorous winters and savage enmity combined with other untoward circumstances to render their foothold at Montreal insecure, and exploration westward was a slow process. At the end of a century they had progressed no further than Lake Huron. No Frenchman had ventured into the forest fastnesses of Wisconsin, Illinois, Minnesota, Indiana or Ohio. Nothing was known as to the extent of the mysterious region that stretched westward, though few men believed that there was more than a narrow strip between the great lakes and the China sea. The delusion was common that a river would be found leading to the Celestial empire. Thus the dream of Columbus survived in modified form 150 years after the caravel of the explorer had grated its keel on the shore of Watling’s Island. 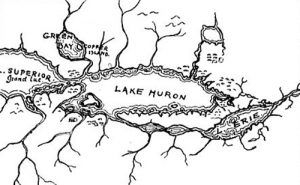 From time to time, wandering Indians brought to the eager listeners at Quebec, tales of the unknown western region. These but made more keen the desire to reach the riches of Cathay; but the vague accounts of the Indians were distorted and misapprehended. How little was actually known of this region is shown by a map carefully drawn by Samuel de Champlain, governor of New France, two years before Nicolet started on his quest. On it, Green Bay is placed north of Lake Superior, and Lakes Huron and Ontario are connected directly. Lake Michigan is not on his map unless his Lac des Puants — the usual designation for Green Bay — is intended to represent it. An island designated as the region of copper mines he places in Green Bay. Niagara Falls he had never seen and his supposition was that it was a rapid in the river.

Though he had mistakenly located copper mines on a Green Bay island, he knew positively of the existence of the metal, for an Indian had brought him a lump of the virgin ore. Other Indians, who were wont to come down the Ottawa river in their flotillas of canoes to trade with the Frenchmen, had told him of a nation dwelling some distance westward who were known as the “People of the Sea.” These were the Wisconsin Winnebago, who years before had migrated to the region of the lake that now bears their tribal name, but Champlain believed they were Chinamen. 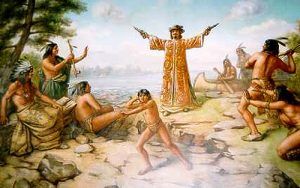 The fanciful description of this people given by his Indian visitors and the fact that they made their habitation on the shores of a “great water” confirmed Champlain in his belief that he had at last found the long-sought clue to the route to China. He chose Jean Nicolet as his ambassador. Nicolet had lived for a number of years in the lodges of the Algonquin tribes, and knew their languages. He was accustomed to the fatigues and privations of wilderness life, and the lore of the woods was a lesson he had conned fully as well as any of his dusky companions. In July of the year 1634 he started on his journey, accompanied by some Jesuit priests who were about to establish a mission in the Huron country and were glad to avail themselves of Nicolet’s guidance. At the Isle de Allumettes they parted, and Nicolet pursued his way with Indian companions only. A glance at the map is necessary to convey an idea of the journey thus made in a canoe. Starting from Quebec and leaving the St. Lawrence at its junction with the Ottawa, Nicolet ascended this stream to the tributary whose Indian name, Mattawin, signifies “Home of the Beaver”; thence Lake Nipissing was reached by means of a narrow passage or “carry.” Next his canoe floated down the French river into Georgian bay and Lake Huron. He passed the Manitoulin islands, skirted the shore of the great lake and came to the place where dwelt the “People of the Falls,” the Sault Ste. Marie familiar on modern maps. Here he and his seven Hurons rested. But a few miles westward was the eastern extremity of the largest freshwater body in the world, Lake Superior. There is no evidence to show that Nicolet went nearer this lake than the sault, or falls. Instead he seems to have rested at the falls with his seven Huron companions, and then retraced his way down the strait and entered Lake Michigan through the Mackinac passage. For the first time a white man saw the broad surface of this inland sea. Along its northern shore his canoe was paddled by his dusky oarsmen. At the bay de Noquet he briefly tarried, and finally he came to the Menominee where that river pours into Green Bay.

At last Nicolet was on Wisconsin soil. He believed himself to be on the threshold of China. The Menominee, who made their habitation here, were of a lighter complexion than the Indians Nicolet knew. Some writers have ascribed this circumstance to the use of wild rice by these Indians as a staple article of diet. Champlain’s messenger learned that but a short journey would now bring him to the land of the Winnebago. He sent one of his Huron guides to apprise the supposed celestials of his coming and prepared to meet them in becoming style. For this purpose, he had brought a robe of gorgeous hue, like unto Joseph’s in its resplendent coloring. The early French narrative, known as the Vimont Relation, describes how Nicolet’s mandarin dress was besprinkled with birds of bright plumage and flowers of many hues, in woven work.