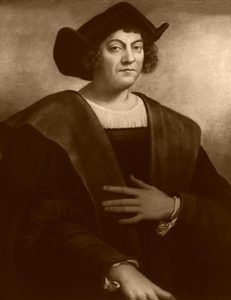 Christopher Columbus was an Italian explorer, navigator, and colonizer who has historically been credited with the discovery(*) of the “New World” of the Americas on an expedition sponsored by King Ferdinand of Spain in 1492. After making four voyages across the Atlantic Ocean his efforts initiated European colonization of the New World.  The U.S. established a Federal Holiday recognizing Columbus in 1934, despite the fact he wasn’t the first European on the American Continent.

Columbus was born in 1451 in the Republic of Genoa, Italy. As a child, he evidently had little or no education as he didn’t learn to read and write until he was an adult. He first went to sea as a teenager participating in several trading voyages in the Mediterranean and Aegean seas. In 1476, he nearly lost his life when his ship was attacked by French privateers off the coast of Portugal. When his ship was burned, he was forced to swim to the Portuguese shore. Afterward, he made his way to Lisbon, Portugal, where he eventually settled and married Felipa Perestrello, with whom he would have one son, Diego, in 1480. Soon afterward his wife died and Columbus moved to Spain. There, he would sire a second son with Beatriz Enriquez de Arana. named Fernando, who was born out of wedlock in 1488.

Columbus then participated in several expeditions to Africa where he gained knowledge of the Atlantic currents flowing east and west from the Canary Islands. Travel to India and China at the time was not only long and arduous but also dangerous due to the Muslim domination of the trade routes through the Middle East. Portuguese explorers solved this problem by sailing south along the West African coast and around the Cape of Good Hope. But, Columbus had a different idea, believing that sailing west to reach the East would be quicker and safer.

In search of a sponsor for the voyage, he took his idea to Portuguese King John II in 1484, then to Genoa and Venice, Italy, but was rejected all three times. He then approached the Spanish monarchy in 1486, who showed some interest but rejected the idea because they were in a war with the Muslims. For the next several years, Columbus continued to lobby several countries for their patronage but was not successful until the Spanish army captured the last Muslim stronghold in Granada in January 1492.

Shortly afterward, the Spanish monarchs agreed to finance his expedition with Columbus’ contract stating he could keep 10 percent of whatever riches he found, would receive a noble title and would be awarded the governorship of any lands he should encounter. 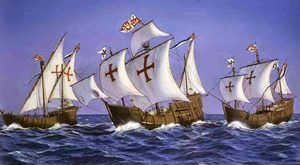 On August 3, 1492, Columbus and his crew set sail from Spain in three ships: the Nina, the Pinta, and the Santa Maria. After 36 days of sailing, Columbus and several crewmen set foot on an island in the present-day Bahamas on October 12 and claimed it for Spain. There, he encountered a friendly group of natives who were open to trade with the sailors and was intrigued by the bits of gold worn by the natives for adornment.

For months, Columbus and his men continued their journey, visiting the islands of Cuba and Hispaniola (now Haiti and the Dominican Republic) meeting with the leaders of the native population and looking for pearls, precious stones, gold, silver, and spices. During this time, the Santa Maria was wrecked on a reef off the coast of Hispaniola. With the help of some islanders, Columbus’ men salvaged what they could and built the settlement of Villa de la Navidad (“Christmas Town”) with lumber from the ship. Thirty-nine men stayed behind to occupy the makeshift settlement and Columbus, convinced his exploration had reached Asia, set sail for Spain with the two remaining ships.

Returning to Spain in 1493, Columbus gave a glowing report as to how he had reached the islands just off the coast of Asia. Presenting the royal court with artifacts, Indians and a small amount of gold, he was warmly received.

About six months later, on September 25, 1493, Columbus took to the seas on his second expedition, this time with 17 ships and almost 1,500 men. They made landfall on November 3, 1493, near Dominica among the Lesser Antilles. They then explored more islands in the Caribbean Ocean before making their way to back Hispaniola.

There, Columbus and his crew discovered the Navidad settlement had been destroyed and the sailors had been killed. Spurning the wishes of the queen, who found slavery offensive, Columbus established a forced labor policy over the native population to rebuild the settlement and explore for gold. His efforts produced small amounts of the mineral while spawning great hatred among the native population. Columbus left his brothers, Bartholomew and Diego, to govern the settlement, along with part of his ships’ crew. He headed west with the rest of his crew and a number of native slaves in a fruitless search for gold and other valuable goods.

Though he found little of value, Columbus further convinced himself that he had discovered the outer islands of China. In the meantime, in lieu of the material riches he had promised the Spanish monarchs, he sent some 500 slaves to Queen Isabella. However, the queen, who didn’t believe in slavery was horrified and promptly and sternly returned the “gift.” 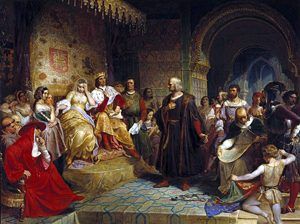 Christopher Columbus before the Queen

Columbus returned to Spain in 1496 where he was coolly received at court. He had not found the rich Asian mainland, his efforts to get gold from the Indians had been only moderately successful, and the crown had begun to receive complaints about Columbus from the sailors and settlers.

Despite his cool reception two years earlier, the crown financed a third expedition. On May 30, 1498, Columbus left with six ships from Sanlúcar, Spain, once again headed for the Americas. Three of the ships headed directly for Hispaniola with much-needed supplies, while Columbus took the other three in an exploration of what might lie to the south of the Caribbean islands he had already visited.

It was during this voyage that he actually reached the mainland in present-day Venezuela. He then returned to the Hispaniola settlement, which had deteriorated to the point of near-mutiny with the settlers claiming they had been misled by Columbus’ claims of riches and complaining about the poor management of his brothers. Columbus was eventually forced to make peace with the rebellious colonists.

In the meantime, a number of returning settlers and sailors lobbied against Columbus at the Spanish court, accusing him and his brothers of gross mismanagement. In 1500, the Crown had him removed as governor, he and his brothers were arrested, and transported in chains to Spain They lingered in jail for six weeks before King Ferdinand ordered their release. They were eventually restored of their freedom and wealth, but Columbus’ titles and authority were stripped.

Columbus made a fourth voyage in search of the Strait of Malacca to the Indian Ocean. Accompanied by his brother Bartolomeo and his 13-year-old son Fernando, he left Cádiz, Spain on May 11, 1502, with his flagship Santa María and the vessels Gallega, Vizcaína, and Santiago de Palos. This time, Columbus made it all the way to Panama – just miles from the Pacific Ocean – where he had to abandon two of his four ships in the face of an attack from hostile natives. 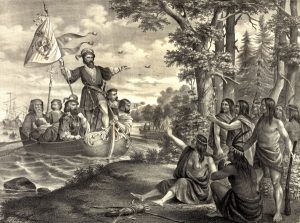 Landing of Christopher Columbus in America, at San Salvador, October 12, 1492.

In June 1503, his remaining ships were caught in a damaging storm off the coast of Cuba and were beached in Jamaica in June 1503. There, they remained until a Spaniard named Diego Mendez along with several natives paddled a canoe to Hispaniola. However, the governor, Nicolás de Ovando y Cáceres, detested Columbus and obstructed all efforts to rescue him and his men. Help finally did arrive in June 1504 and Columbus and his men returned to Spain.

In the two remaining years of his life, Columbus struggled to recover his lost titles but was unsuccessful. He died in Valladolid on May 20, 1506, still believing he had discovered a shorter route to Asia.

Though Columbus is credited with opening up the Americas to European colonization, he failed to find that what he set out for – a new route to Asia and the riches it promised.

* He also did not “discover” the Americas, nor was he even the first European to visit the “New World,” as Viking explorers had sailed to Greenland and Newfoundland in the 11th century. Some experts believe there is also evidence of Viking landings on the continental United States.

Celebrations of Columbus can be found as early as 1792, however, it was 1892 when President Benjamin Harrison called upon citizens of the U.S. to celebrate the explorer as part of a one-time 400th-anniversary event.  In addition, many Italian American’s observed October 12 as a celebration of their heritage dating back to 1866.  The day was first established as a Federal holiday in 1934. Since 1971 the holiday has been moved to the second Monday in October.

The holiday has its controversies, and despite push back from Italian Americans, there have been strong efforts to rebrand Columbus Day as Indigenous Peoples day instead.  For Native Americans, the day brings up colonial oppression and in 1989, South Dakota became the first state to switch the holiday to Native Americans’ Day, celebrating it for the first time in 1990. Berkeley California was the first U.S. city to switch to Indigenous Peoples’ Day shortly after. Today, according to the Pew Research Center, Columbus Day is the most inconsistently observed national holiday in the United States.