The Niagara Falls National Heritage Area, located in western New York, is a collection of historical, natural, and cultural resources that stretch from Niagara Falls to Old Fort Niagara. The heritage area includes one city, two towns, two villages, a host of parks, historic sites, and attractions along the Niagara River. 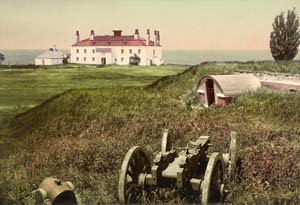 The Niagara Falls region has significant historical associations with American Indians, early European exploration, the French and Indian War, the American Revolution, the War of 1812, and the Underground Railroad.

More than 12,000 years ago, Niagara Falls extended seven miles downriver to present-day Lewiston, New York, and Queenston, Ontario, Canada. Over the years, the brink has eroded, sometimes as much as six feet per year, to its present site.

Before Europeans came to the area, it was dominated by the Neutral Nation of Native Americans.

Father Louis Hennepin, a French priest, was the first European to report on Niagara Falls with his account of his 1678 visit. Hennepin was a member of Robert de la Salle’s expedition that explored and claimed the Great Lakes and the Mississippi and Ohio Rivers for France. In 1679, La Salle and his men built Fort Conti at the mouth of the Niagara River to utilize as a trading post and as a base for boat-building.

By then, the region had already become a crossroads for the North American fur trade. 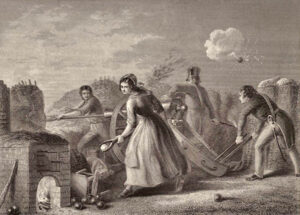 A bloody war had been taking place in the area between the Iroquois Confederacy and the Algonquin-speaking tribes. Later, during the conflict between empires, the Iroquois Confederacy was formed by the Mohawk, Onondaga, Oneida, Cayuga, and Seneca in the mid-16th century and tended to be allied with the English. In contrast, the Algonquin tribes were allied with the French. The Seneca settled the area east of the Niagara River and played an important role in maintaining the portage around Niagara Falls. In 1722, the Tuscarora, an Iroquoian group, who had been pushed out of North Carolina by English settlers and moved to western New York, joined the Iroquois Confederacy.

During the 18th century, the Niagara area continued to be a place of contention between the French and British Empires. The influx of newcomers was probably a catalyst for already hostile native tribes to turn to open warfare in competition for the fur trade.

When the French and Indian War ended in 1763, all French possessions in North America were awarded to Britain, and Fort Niagara became a British outpost. Fort Niagara was a British base for launching raids against the Americans and a safe haven for the Iroquois during the American Revolution.

The Treaty of Paris in 1783, which concluded the American Revolution, drew a boundary line down the middle of the Niagara River, awarding the east bank to the United States and the west bank to Britain and its province of Canada. 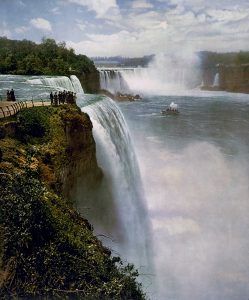 After the American Revolution, Americans started settling in the Niagara Falls area. Although the Treaty of Fort Stanwix in 1784 and the Treaty of Canandaigua in 1794, between the United States and the Six Nations of the Iroquois, acknowledged Indian ownership of most land in western New York, American settlers and speculators soon pushed into the area. Under the Big Tree Treaty in 1797, the Seneca sold the rights to most of their land in western New York. However; the treaty secured the Cattaraugus, Buffalo Creek, Tonawanda, and Tuscarora Reservations. These treaties and the rights of Indian tribes in western New York remain in effect but are somewhat strained until this day. Many members of the Six Nations moved to the Canadian side of the Niagara River after the American Revolution and still have a reservation at Ohsweken, Ontario.

Britain turned Fort Niagara over to the Americans in 1796, moved its garrison across the river to Fort George, at today’s Niagara-on-the-Lake, and built a new portage road on the Canadian side of the river.

Establishing the international boundary along the Niagara River made the Niagara Frontier one of the most contested theaters of the War of 1812. Americans invaded Canada and were repulsed; then, the British took control of the American side of the river. The Treaty of Ghent, which ended the war in 1814, restored the previous boundary.

Niagara Falls continued to be a barrier for waterborne transportation between the Great Lakes region, the St. Lawrence River, and the Atlantic Ocean. The first step towards uniting a country divided by geography began in 1817 with the construction of the Erie Canal. This canal linked New York’s Hudson River with Lake Erie at Buffalo. The Erie Canal opened in 1825, immediately benefiting New York and beyond. 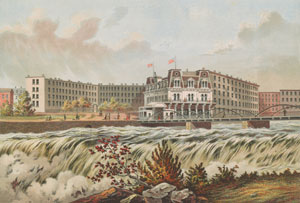 By this time, it became feasible for tourists to visit Niagara Falls. The first hotel opened, on the Canadian side, in 1822, and completing the Erie Canal facilitated travel from the Eastern Seaboard to Niagara. The first American travel guide, The Fashionable Tour, in 1825, by Gideon Minor Davison, sketched out a “Grand Tour” of North America that included New York City, Hudson River Valley, Catskill Mountains, Saratoga Spring, and Niagara Falls, as well as Montreal and Quebec City.

Entrepreneurs discovered that tourists were looking for things to do at the Falls and that there were many money-making opportunities in serving tourists. As hotels increased, so did museums, curiosity shops, boat rides, and guided tours behind the Falls. The first of many sensational events to take place at Niagara occurred in 1827 when the condemned merchant ship Michigan was sent over the Falls with a cargo of screaming animals on board. Thousands looked on and purchased refreshments and souvenirs. As the years passed, daredevils walked on tightropes over the Niagara Gorge or attempted to plunge the rapids and Falls in barrels. 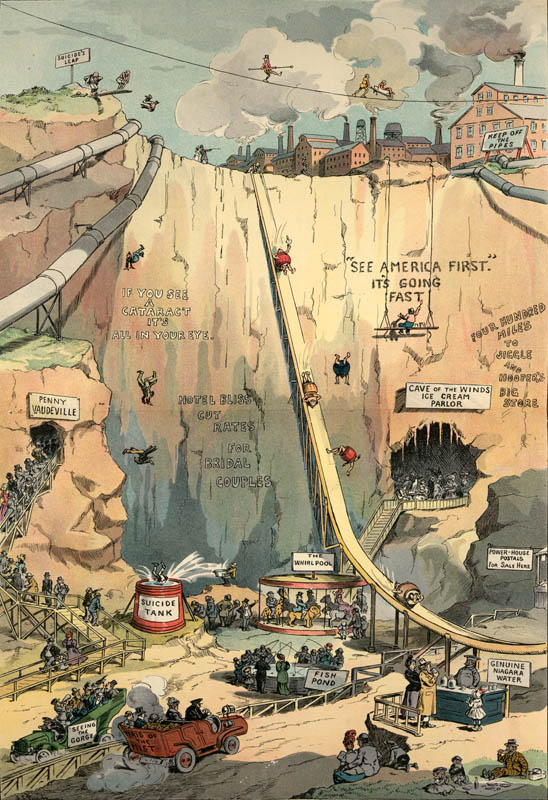 Access to Niagara Falls improved when the first railroad line reached the Falls in 1838.

But very quickly, tourist accommodations and special events began crowding the place’s mystical splendor. Unfortunately, hoaxes and carnival acts became so integral to the Niagara Falls experience that a guidebook, The Humbugs of Niagara Falls, was published in 1884 to point out the tourist traps.

The history of Niagara Falls followed the course of tourism development in the United States. After being a pastime for the leisured elite before the Civil War, tourism became an activity of the emerging middle class. Their interest in pleasure travel was enhanced by the construction of a vast national railroad network.

With the automobile came a new proliferation of tourist attractions, souvenir shops, motels, and eating places, especially on the Canadian side of the Falls. One of the early experiences in mass tourism was the honeymoon, and Niagara Falls established itself as the “honeymoon capital” of North America by the 1920s. Upper-class honeymooners had been attracted to Niagara Falls during the 19th century, but the honeymoon only became a widespread middle-class ritual in the 1920s.

During the 1940s and 1950s, working-class couples joined the honeymoon parade. The fading of Niagara Falls as a honeymoon destination and tourist attraction in the 1960s indicated proliferating competition from more glamorous honeymoon sites around the globe, and the failure of Niagara Falls to update its allures. 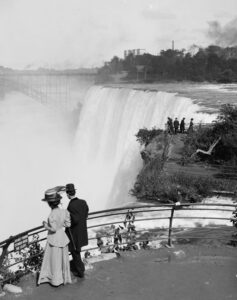 The contrived tourist attractions at Niagara Falls represented an early wave of mass entertainment, which later evolved into amusement parks at Coney Island in the 1890s, and the theme parks, such as Disneyland, of the second half of the 20th century. These well-capitalized, up-to-date popular attractions surpassed the appeal of Niagara Falls, which suffered as a tourist draw. Interestingly, one of Niagara’s strategies for reinventing itself was to build gambling casinos, including one in Ontario in 1996 and one in New York in 2003, trying to emulate the glitzy seductions of Las Vegas. Other tourism strategies related to improving the experience for those interested in the nature, history, and culture of the Niagara Region including upgrading the Niagara Falls State Park and the Niagara Gorge Trail and establishing a national heritage area.

Four of the five Great Lakes — Superior, Michigan, Huron, and Erie — drain into the Niagara River before emptying into Lake Ontario. These five Great Lakes make up almost one-fifth of the world’s freshwater supply. Today, 3,160 tons of water flows over Niagara Falls every second. This accounts for 75,750 gallons of water per second over the American and Bridal Veil Falls and 681,750 gallons per second over the Horseshoe Falls.

The “Falls to Fort” region offers the world-famous Niagara Falls, a variety of heritage tourism activities, quaint village shops and restaurants, a downtown tourism area, and a variety of outdoor activities, including boating, fishing, and hiking. 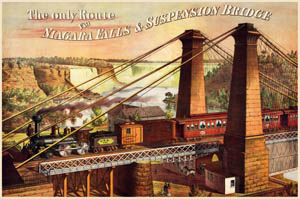 Niagara Falls State Park is the oldest state park in the U.S. Established in 1885 as the Niagara Reservation. It was the first of several such reservations that eventually became the cornerstones of the New York State Office of Parks, Recreation, and Historic Preservation.

The park, recognized as the oldest state park in the United States, contains the American Falls, the Bridal Veil Falls, and a portion of the Horseshoe Falls (also known as the Canadian Falls).

Today, over eight million people visit the oldest state park in the United States yearly to gaze at the mighty waters of Niagara Falls. Representing 20% of the world’s freshwater, the importance of Niagara continues to be “key to the whole continent.” 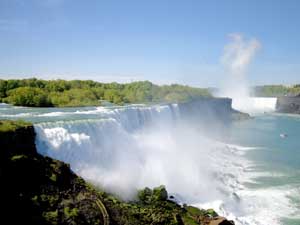