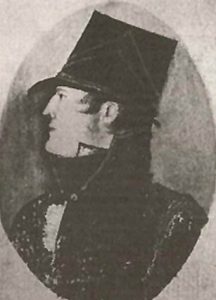 David Edward Jackson was a pioneer, explorer, trader, and fur trapper well-known in the American West.

Often called “Davey,” Jackson was born on October 30, 1788, to Colonel Edward and Mary Haddon Jackson in Randolph County, West Virginia. Both his father, Edward Jackson, and his Uncle, George Jackson, served as Virginia Militia Officers during the American Revolution.

The prominent wealthy family, which included eight children, lived west of the Shenandoah Mountains. David learned business, farming, hunting, and surveying skills from his father and was educated at the Virginia Randolph Academy. At the age of 21, he married Juliet Norris in 1809, and the couple would eventually have four children. When the War of 1812 began, he became an Ensign in the 19th Infantry in Virginia and participated in the Battle of New Orleans. Afterward, he moved with his family to Ste. Genevieve, Missouri, planning to engage in farming. His older brother, George, had preceded him to the area and owned a sawmill.

However, instead of farming, David responded to an ad in the St. Louis Enquirer for a job with William Ashley’s  Rocky Mountain Fur Company in the spring of 1822. Although his wife did not like the idea, David saw it as an opportunity for adventure and wealth. Leaving his wife and children, he accepted a job as a clerk for the company. Other men who took positions included Jim Bridger, William Sublette, and Jedediah Smith.

He soon joined a major expedition to the upper Missouri River with Andrew Henry and 150 other men. Combining his mountain knowledge with an ability to work with Indians, Jackson proved a natural leader. While in present-day  South Dakota, Arikara warriors attacked the expedition on June 2, 1823. The U.S. Army retaliated in what is now known as the Arikara War, the first military conflict between the United States and the western Native Americans. 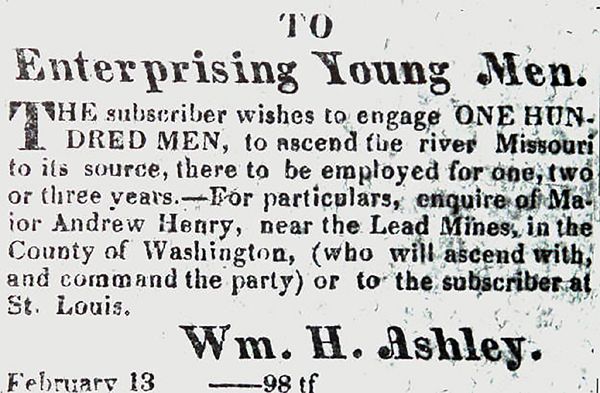 In 1826, Ashley sold his interest to Jedediah Smith, William Sublette, and David Jackson, who carried on the business under the name of Smith, Jackson, and Sublette. They hired more mountain men, some of whom would become the subject of many a dime novel, such as Jim Bridger, Joe Meek, Kit Carson, and Robert Newell. In 1828-29, Jackson wintered among the Flathead Indians and explored the area around Jackson Hole, Wyoming, which is named for him. Working in the Rocky Mountains from 1826 to 1830, he earned the moniker of the King of the Tetons.

By 1830, Jackson, Smith, and Sublette had made a good profit and sold their interest company to the Rocky Mountain Fur Company. The three partners then returned to St. Louis, having made a good profit in their enterprise. Jackson then invested in the mining and metal business.

Jackson entered the Santa Fe Trail trade with the same partners in April 1831. Taking the Cimarron Route, Jedidiah Smith searched for water but never returned. The caravan continued, hoping he would find them. Reaching New Mexico in July 1831, they would learn that Comanche Indians had killed Jedidiah Smith.

David then traveled to California on another trading expedition before returning to Missouri. However, after abandoning his family for so long, he reunited with his son William Pitt Jackson in St. Genevieve, Missouri, but not with his wife or three other children.

In 1837, on a business trip to Paris, Tennessee, to collect debts, David became ill with Typhus Fever. While he was sick, he wrote a letter to his oldest son Edward John Jackson, asking him to conclude all his business dealings. He died on December 24, 1837, in Paris, Tennessee, at the age of 49. Fellow Masons buried him in the Paris City Cemetery, Henry County, Tennessee.