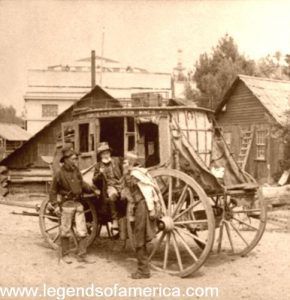 California Miners, in front of stagecoach, 1894

[Editors Note: This article, Knights of the Lash: Old Time Stage Drivers of the West Coast was written by Major Ben C. Truman and appeared in the Overland Monthly, Volume XXXI, January-June, 1898.]

The old stage drivers of the Pacific Slope during the fifties and sixties [1800s], nearly all of whom have themselves been driven over the “Great Divide” were the last of their race. Time was, however, when the man who held the ribbons over a six-horse team on the summits of the Sierra and in the canons of the Coast and Cascade Ranges was more highly esteemed than the millionaire or the statesman who rode behind him. He was, moreover, the best-liked, and the most honored personage in the country through which he took his right of way. He was often a “hail fellow well met,” but he was the autocrat of the road at all times. His orders were obeyed with the greatest celerity [swiftness], and he was always the first to be saluted by the wayfarer, the passenger, the hostler, the postmaster, and the man at the door of the wayside inn. Our Sierra Jehu, was generally an American, in most cases from New York, Ohio, Pennsylvania, Tennessee, Texas, Missouri, New Hampshire, or Maine.

All, or nearly all, of his class, had been through grammar or higher schools, some of the colleges, as well, and a majority of them had pronounced opinions on politics and theology and could converse rationally and cleverly on all ordinary subjects.

All were gentlemanly and accommodating and favorites with the women who lived along their routes, few of whom they addressed except by their Christian names, while the pretty, plump, sixteen-year-olds they would tap familiarly under their chins. Some of the Jehus were young and green in the service, but the majority were grim and gray and professionally artistic. There were those who never indulged in liquors or wines of any kind; there were those who occasionally “spreed it,” and there were those who could not keep their teams on the grades unless they took a “couple of fingers” at every inn and “joined” the “outside traveler” moderately often between “changes.” No person ever gave a California stage driver a small coin, as one would a porter or a waiter; but a nice slouch hat, a fine pair of boots, a pair of gloves, silk handkerchiefs, or good cigars, were always acceptable. These old-time drivers all dressed in good taste. Their clothes were of the best cloths, made to order; their boots and gauntlets fine fitting and of a good pattern, and their hats of a cream-white, half stiff and half slouch. Most of them used tobacco in various forms. Many of them were perfect Apollos. 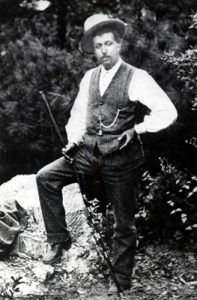 One of the best-known of all Sierra whips was “Alfred,” [George Monroe] a mulatto, who for a number of years, up to the time of his death, drove a stage daily between Wawona and Yosemite Valley. Probably no man, living or dead, has ever driven so many illustrious people. Grant, Garfield, Hayes, Elaine, Schurz, Sherman, Senator Stewart, Senator Morgan of Alabama, and hundreds of other Senators and Congressmen; governors of many of the States; Bull Run Russell, George Alfred Townsend, Charlie Nordhoff, John Russell Young, and scores of other eminent journalists; Albert Bierstadt, Thomas Moran, Tom Hill, C. D. Robinson, and other famous artists; Mrs.Langtry, Lady Franklin, the Princess Louise, and many hundreds of other persons of consequence, have been taken into the great Yosemite by Alfred.

He never had an accident; always made time, either way, to a minute; knew every peak and tree and rock and canon and clearing and hut and streamlet by the wayside. He was of medium stature, and weighed 165 pounds; he dressed neatly and wore the whitest and most handsome gauntlets of any driver in the Sierra. He was of a melancholy nature, oft times driving the entire distance from Wawona to Inspiration Point without uttering a word or relaxing a feature. But if he had a jolly crowd behind, he would watch his team carefully and listen radiantly to the jokes, stories, conundrums, and conversation, of those in his charge.

The last time I saw Alfred I was a Yosemite commissioner and went over the mountains with him alone. He had on a new pair of gauntlets sent him by Senator Morgan of Alabama and a fine whip presented by Mrs.Langtry. He said that he had never permitted but one man to take the reins from him in his life, and that was President Grant.

“The General drove nearly all the way to Inspiration Point,” said Alfred, “and lighted at least four cigars. He took in everything along the road and made all the turns as perfectly as an old driver. I had a fine crowd that day, the General and Mrs. Grant and Ulysses, Jr.; Mr. Young, who has since been Minister to China and is now Librarian of Congress; and there was Miss Jennie Flood, the only daughter of the wealthy bonanza man, who was jilted by young Grant; Miss Dora Miller, the only daughter of Senator Miller, who is now the wife of Commander Clover, United States Navy, and Miss Flora Sharon, who afterwards married Sir Thomas Hesketh of England.

Miss Sharon was the prettiest girl I ever carried into the valley, and Mrs. Langtry the most beautiful and agreeable woman. I have received presents from all the members of the Grant family. The General himself gave me a silver-mounted cigar-case containing eight cigars, and the girls sent me gloves and candy.”

On the 17th of August, 1878, I rode over one of the summits of the Sierra from Quincy, Plumas County, to Oroville, Butte County, upon the seat with “Cherokee Bill.”  This driver was not an Indian, but a regular Buckeye from the Western Reserve. He was a stout, clumsily-put-together creature, with stub beard, and drove a four-horse mud wagon.

He was rather more morose-looking and slovenly in his dress than most Sierra drivers, being clad in overalls and woolen shirt, but wearing good gloves and the regulation hat. I was the only passenger except for an old clergyman, who occupied the middle seat on the inside. We left Quincy at six in the morning, with not a cloud in the sky. At ten the entire heavens were overcast, it began to sprinkle, and distant mutterings of thunder could be heard. At eleven o’clock, when within a thousand feet of the summit, we encountered the full violence of the storm. I had never seen lightning, thunder, and rain, like it. The rain descended not in torrents, but in shafts; the lightning flashed almost incessantly, and the thunders made a continuous roar, with now and then, a crash which resembled the fall of a hundred or more of the noblest taxodiums [type of Conifer tree] of the forest. I said to Bill, although I was already completely drenched:  “I guess I’ll crawl inside.”

“No!” he replied, “you don’t want to get in with that thing; he refused to bury my poor boy a few months ago because he hadn’t been baptized. I wish one of these pines would strike him dead. He’s one of those old duffers who believes that our babies come into the world to be damned and claims that it is wicked to bury a fellow-being if he hasn’t been baptized by some old preacher like Kalloch. I ‘d like to run him off into the canon.”

We reached the summit at twelve o’clock, and here a sight presented itself such as I had never seen before. The storm had spent itself on the summit and had been swept into the stupendous chasms surrounding, with all of its celestial pyrotechnics and deafening artillery; and from a sunny elevation seven thousand feet in the air we could behold the jubilee of elements below. I saw Hooker’s fight in and above the clouds on Lookout Mountain, at the commencement of the Atlanta campaign. I was reminded of that memorable episode by the sight before me, except that, instead of the din of small arms and the infernally-demoralizing “Rebel yell,” the roar of heaven’s artillery in the Sierra that 17th day of August was like that of ten thousand battles in the clouds. Bill reined up so that I could stand and get a good view, at which the inside passenger stuck his head out of the window and asked:

“What is the matter, driver? What are you stopping here for? ”

Bill was ferocious, and replied, “I’m listening to the salute the Almighty is firing over my poor boy’s grave.”

The preacher said no more, and I told Bill to drive on, which he did, but quietly said to me: “Do you think that preacher would ask for my certificate of baptism if he had a chance to bury me? Not much.”