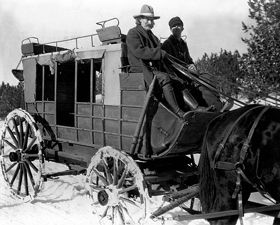 Not everyone could manage a stagecoach. The stagecoach driver was held in higher esteem when on the summit of the Sierra than was the millionaire statesman who might be riding beside him.

While most stage drivers were sober, at least while on duty, nearly all were fond of an occasional “eye-opener.” A good driver was the captain of his craft. He was feared by his timid passengers, awed by stable boys, and was the trusty agent of his employer.

Weather permitting, the seat next to the driver was the preferred seat of male passengers. But this was one reserved seat, and it was not gotten by simply being the first to hop on the left front wheel rim and climbing into the box.

If the driver didn’t want the person who took the seat, he would firmly order him down and then enjoy the passenger’s discomfiture for the next ten miles.

To sit in the driver’s seat, one proceeded very much in the manner of securing an appointment to a high office. He went to the source of authority—above the driver himself—to the superintendent, and even to the president of the company.

Charley Parkhurst was one of the more skillful stagecoach drivers in California and throughout the west. He was called “One-eyed” or “Cockeyed” Charley because he had lost an eye when kicked by a horse. For 20 years, he drove a stagecoach in California. Twice, Charley was held up. He was forced to throw down his strongbox the first time because he was unarmed. The second time, he was prepared.

When a road agent ordered the stage to stop and commanded Charley to throw down its strongbox, Parkhurst leveled a shotgun blast into the outlaw’s chest, whipped his horses into a full gallop, and left the bandit in the road.

One-eyed Charley was known as one of the toughest, roughest, and most daring stagecoach drivers. Like most drivers, he was proud of his skill in the extremely difficult job as a “whip.” Proper handling of the horses and the great coaches was an art that required much practice, experience, and, not the least, courage.

Whips received high salaries for the times, sometimes as much as $125 a month, plus room and board.

“How in the world can you see your way through this dust?” one passenger asked Charley.

“Smell it. Fact is,” Charley replied, “I’ve traveled over these mountains so often I can tell where the road is by the sound of the wheels. When they rattle, I’m on hard ground; when they don’t rattle, I gen’r’lly look over the side to see where she’s agoing.”

Yet, little was known about Charley Parkhurst before or after he came to California. It wasn’t until his body was prepared for burial that his true secret was discovered. 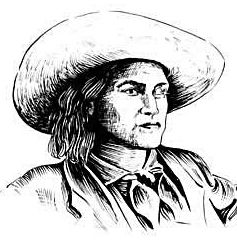 Charlotte “Charley” Parkhurst was a woman. One doctor claimed that she had been a mother at some point in her life.

Unknowingly, Parkhurst could claim a national first. After voting on Election Day, November 3, 1868, Charley was probably the first woman to cast a ballot in any election. It wasn’t until 52 years later that the right to vote was guaranteed to women by the nineteenth amendment.

Some drivers would as soon be caught without their pants as without their whips. Many of the whips used by the stage drivers were fine works of art, generally ornamented with handcrafted silver ferules girdling a handle made of hickory. Many of these whips are prized museum pieces today.

Whips were never sold, loaned, borrowed, or traded. In his book, Stagecoach Days in Santa Barbara County, Walker A. Tompkins wrote, “Whips were considered a part of the driver, who kept the lashes well-oiled and as pliable as “a snake in the sun.”

Most stagecoach whips had buckskin lashes, usually 11 to 12 feet in length, attached to a five-foot hickory shaft. The lashes were 10 feet too short of reaching the lead team, controlled by reining. Some rare drivers did carry a “six-horse whip” with a 22-foot lash, but these were mainly for circus and rodeo appearances and were considered too unwieldy for practical use.

The driver took his whip with him when off duty and always hung it up. He never rested it in a corner for fear of warping the stock. Neither did he wrap the lash around the handle for fear of curling the thongs.

Stagecoach drivers were scornful of the way they were depicted in the movies. The top-grade stagecoach driver used the cracking of the whip sparingly. These drivers were concerned that the “pistol-shot” sounds made by the whips would only startle their passengers out of their naps or, worse yet, spook their teams.

Roads had to be built at public expense before stagecoaches were given a route. Some were little more than ox-cart tracks linking the various ranchos. Even the El Camino Real, the storied “King’s Highway,” was little more than a foot trail.

A tale is told about stage driver Whispering George Cooper. He got his name because of his loud bellow, which was said could be heard for miles, even against the wind, while he pushed his team up a treacherous pass. At one point, Whispering George needed to repair a broken singletree that had developed a bad split. He scoured the stage for a bit of rope or a scrap of baling wire to make the repair.

At that moment, a rattlesnake slithering across the road in front of them spooked his team. George killed the snake, which measured five feet or more in length. A passenger commented on how much the snake resembled a rope.

“By Gawd, that’s what I’ll use it for!” exclaimed George. He wrapped the dead snake around the single tree and knotted it into place. It worked, holding the damaged single tree together until it reached a relay station.

The term “stagecoach” came about in medieval Europe when public coach travel was the only way one could get from one point to another without walking.

Trips were generally made in easy stages because of bad roads and the lack of overnight lodgings along the way. Hence, the term “stage” coach.

About the Author: Alton Pryor has been a writer for magazines, newspapers, and wire services. He worked for United Press International in their Sacramento Bureau, handling printed press and radio news. He traveled the state as a field editor for California Farmer Magazine for 27 years. He is now the author of many books, primarily on California and western history. You can see some of his books here on Amazon.