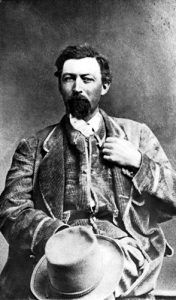 Henry James “Hank” Monk was one of the most famous stagecoach drivers in the American West, driving the stage from Genoa, Nevada to Placerville, California.

Henry James Monk was born in Waddington, New York, in 1833 and made his way to California as a young man, crossing the Isthmus of Panama and arriving in 1852. He first went to work for James Birch on the Auburn stage line, where he stayed until 1857. He then became a driver on the Genoa-Placerville route.

He became famous when he took Horace Greeley, famed New York Daily Tribune journalist, for a wild ride in 1859. Transporting Greeley over the Sierra Nevada Mountains from Virginia City, Nevada to Placerville, California, the writer complained that the trip was taking too long and he needed to reach his destination more quickly as he had an appointment for a lecture.

In response to Greeley’s complaints, Hank yelled back, “Keep your seat, Horace; I’ll get you there on time!” and began to furiously drive the team. Later, Greeley wrote of the wild ride which became a legend as the tale was told and retold.

Later he went to work for the Pioneer Stage Company, a route from the Sacramento Valley to Utah. Over the years, he picked up several nicknames, including the “Knight of the Lash” and the “King of Coachmen.” He continued to drive a stagecoach until he succumbed to pneumonia on February 28, 1883, at Carson City, Nevada, where he was buried. Upon his tombstone was inscribed, “Sacred to the memory of Hank Monk, the whitest, biggest-hearted, and best-known stage driver in the West.”

The San Jose Pioneer newspaper of the time wrote of him: “It is said that strangers visiting Carson City would no more think of departing without having seen Hank Monk than a visitor to Rome would omit to take a look at St. Peter’s.”