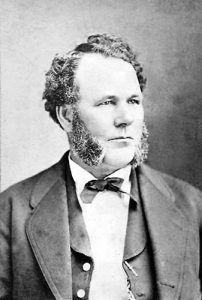 Clark “Old Chieftain” Foss, also known as “Old Foss,” was a boisterous and colorful stage driver who often gave his passengers the thrill of their lives on California’s steep and narrow roads.

Foss originally hailed from Maine, borne about 1819. In 1844, he moved to Troy, New York, and moved his family to California several years later. By 1859, they were living in Healdsburg, where Foss tried his hand at raising hogs before establishing a livery business. In about 1863, Foss began to run a stage from his livery stable through the Napa Valley to the geysers in the Calistoga and the Geyserville area. The large, cheerful Foss, wearing an oversized gray Stetson, superbly handled the horses around some 35 turns, some with drop-offs of nearly 2,000 feet. He soon gained a reputation for being the “King of Drivers,” as he carried numerous people along the Geysers Stage Route, including several writers who were quick to tell of his skills. As his reputation spread, he picked up two nicknames, “Old Chieftain” and “Old Foss.”

In about 1865, Foss developed his own stage station and rest stop, which consisted of a post office, a large barn, and a hotel, where several notable guests stayed, including Ulysses S. Grant and William Randolph Hearst. He called his little domain “Fossville.”

Though many were impressed by Foss’ ability to travel the route quickly, give his passengers the thrill of their lives on the steep and narrow roads, and his sterling record of no accidents, others were not so impressed, calling him an extremely reckless driver. Unfortunately, Foss’ critics would end up being correct. In the late 1870s, as Foss was once again whipping through the road at a fast pace, the stage tumbled off the road into a ravine between Pine Flat and Fossville. Seven passengers, including Foss, were severely injured, one of whom was maimed for life, and one young woman was killed.

Though Foss healed and returned to work, his demeanor as a stage driver was never the same. In 1881, he quit altogether. He died in August 1885. In the meantime, his son Charlie took over his business, which continued until 1906.