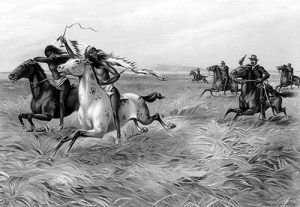 These are sterner, less kindly, less philosophic words than Marcy’s, but they keenly outline the duty of the Army on the frontier. We made treaties with the Indians and broke them. In turn, men such as these ignorant savages might well be expected to break their treaties also; and they did. Unhappily our Indian policy at that time was one of mingled ferocity and wheedling. The Indians did not understand us any more than we did them. When we withdrew some of the old frontier posts from the old hunting-range, the action was construed by the tribesmen as an admission that we feared them, and they acted upon that idea. In one point of view, they had right with them, for now, we were moving out into the last of the great buffalo country. Their war was one of desperation, whereas ours was one of conquest, no better and no worse than all the wars of conquest by which the strong have taken the possessions of the weak.

Our Army at the close of the Civil War and at the beginning of the wars with the Plains tribes was in better condition than it has ever been since that day. It was made up of the soundest and best-seasoned soldiers that ever fought under our flag, and at that time it represented a greater proportion of our fighting strength than it ever has before or since. In 1860 the Regular Army, not counting the volunteer forces, was 16,000. In 1870 it was 37,000 — one soldier to each one thousand of our population.

Against this force, pioneers of the vaster advancing army of peaceful settlers now surging West, there was arrayed practically all the population of fighting tribes such as the Sioux, the two bands of the Cheyenne, the Piegan, the Assiniboine, the Arapaho, the Kiowa, the Comanche, and the Apache. These were the leaders of many other tribes in savage campaigns which set the land aflame from the Rio Grande to our northern line. The Sioux and Cheyenne were more especially the leaders, and they always did what they could to enlist the aid of the less warlike tribes such as the Crow, the Snake, the Bannack, the Ute — indeed all of the savage or semi-civilized tribes which had hung on the flanks of the traffic of the westbound trail.

The Sioux, then at the height of their power, were distinguished by many warlike qualities. They fought hard and were quick to seize upon any signs of weakness in their enemies. When we, in the course of our Civil War, had withdrawn some of the upper posts, the Sioux edged in at once and pressed back the whites quite to the eastern confines of the Plains. When we were locked in the death grip of internecine war in 1862, they rose in one savage wave of rebellion of their own and massacred with the most horrible ferocity not less than six hundred and forty-four whites in Minnesota and South Dakota. When General Sibley went out among them on his later punitive campaign he had his hands full for many a long and weary day.

Events following the close of the Civil War did not mend matters in the Indian situation. The railroads had large land grants given to them along their lines, and they began to offer these lands for sale to settlers. Soldier scrip entitling the holder to locate on public lands now began to float about. Some of the engineers, even some of the laborers, upon the railroads, seeing how really feasible was the settlement of these Plains, began to edge out and to set up their homes, usually not far from the railway lines.

All this increase in the numbers of the white population not only infuriated the Indians the more but gave them the better chance to inflict damage upon our people. Our Army, therefore, became very little more than a vast body of police, and it was always afoot with the purpose of punishing these offending tribesmen, who knew nothing of the higher laws of war and who committed atrocities that have never been equaled in history; unless it be by one of the belligerents of the Great War in Europe, with whom we are at this writing engaged — once more in the interest of a sane and human civilization. The last great struggle for the occupation of the frontier was on. It involved the ownership of the last of our open lands, and hence may be called the war of our last frontier. 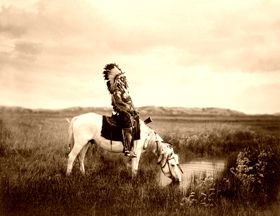 Ogalala Sioux at an oasis in the Badlands.

The settler who pushed West continued to be the man who shared his time between his rifle and his plough. The numerous buffalo were butchered with an endless avidity by the men who now appeared upon the range. As the great herds regularly migrated southward with each winter’s snows, they were met by the settlers along the lower railway lines and in a brutal commerce were killed in thousands and in millions. The Indians saw this sudden and appalling shrinkage of their means of livelihood. It meant death to them. To their minds, especially when they thought we feared them, there was but one answer to all this — the whites must all be killed.

Red Cloud, Crazy Horse, Roman Nose, American Horse, Black Kettle — these were names of great Indian generals who proved their ability to fight. At times they brought into the open country, which as yet remained unoccupied by the great pastoral movement from the south, as many as five thousand mounted warriors in one body, and they were well armed and well supplied with ammunition.

Those were the days when the Indian agents were carrying on their lists twice as many Indians as actually existed — and receiving twice as many supplies as really were issued to the tribes. The curse of politics was ours even at that time, and it cost us then, as now, unestimated millions of our nation’s dearest treasures. As to the reservations which the Indians were urged to occupy, they left them when they Iced. In the end, when they were beaten, all they were asked to do was to return to these reservations and be fed.

There were fought in the West from 1869 to 1875 more than two hundred pitched actions between the Army and the Indians. In most cases, the white men were heavily outnumbered. The account which the Army gave of itself on scores of unremembered minor fields — which meant life or death to all engaged — would make one of the best pages of our history, could it be written today. The enlisted men of the frontier Army were riding and shooting men, able to live as the Indians did and able to beat them at their own game. They were led by Army officers whose type has never been improved upon in any later stage of our Army itself, or of any army in the world.