Fort C.F. Smith in Montana was established on August 12, 1866, on a bluff overlooking the Big Horn River to protect immigrants traveling on the Bozeman Trail from attacks by the resentful Sioux Indians. Its stockade, of logs and adobe, 125 yards square, was an impregnable haven; from its lookout tower, riders three miles distant could be watched. Manned by the 27th Infantry and commanded by Brevet Lieutenant N. C. Kinney, the soldiers battled the Indians from the beginning, as the fort was besieged over and over again by Red Cloud’s Sioux warriors.

On August 1, 1867, three miles from Fort C.F. Smith, the Hayfield Fight occurred, pitting a determined stand of 31 soldiers and civilians against more than 700 Sioux and Cheyenne warriors. Fortified behind a low log corral barrier, the combined soldier/civilian force withstood six hours of attacks before relief finally arrived to disperse the warriors.

In the spring of 1868, the United States Government agreed to abandon the Bozeman Trail forts and close the trail to travel as part of the Laramie Treaty. The forts were abandoned that summer, starting with C. F. Smith, then Phil Kearny, and finally, in late August, Fort Reno. 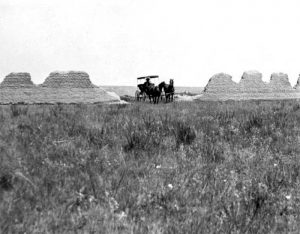 Today, there is nothing left of the old fort but low mounds and debris. Its ruins are on a bluff 500 yards from the Big Horn River on private land, but visitors may see it by making prior arrangements at the Yellowtail Dam Visitor Center. Midway between the ruins and the Big Horn River was the post’s burial ground. In 1892 the remains of 17 soldiers and civilians were removed to the Custer Battlefield National Cemetery. Two and one-half miles south, on War Man Creek, is the site of the Hayfield Fight.