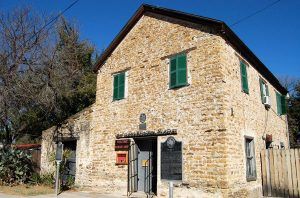 John Perry’s Mercantile, built-in 1870, was one of the first Del Rio. Today, it serves as part of the Whitehead Memorial Museum, Kathy Weiser-Alexander.

The first railroad depot, made of wood, was located at the same location that a newer and much larger brick depot would be built in the 1920s. With the railroad in full operation, the town also began to shift and change. Where previously, the majority of homes and businesses were situated near San Felipe Creek, new homes and businesses began to move north of the railroad.

In 1882, two gristmills were in operation, using the power of San Felipe Creek, and the town had developed with a number of businesses, including the ever-present saloons. The next year, when the first post office opened, the U.S. Postal Department requested that the name be shortened to Del Rio to avoid confusion with San Felipe de Austin. Also built in 1883, was one of the city’s most famous local enterprises – the “Ice Plant.” Situated on San Felipe Creek, it also served as a gristmill, and later, a power-generating plant.

When Del Rio was first formed, it was totally dependent upon water from San Felipe Creek, hauled in large barrels in wagons into the community. However, in 1883, the railroad built the first piped water system. Water was then pumped from the creek to a large wooden tank located north of the railroad tracks. The water was also made available to residents for $1.00 per month. It also provided fire protection for the community. 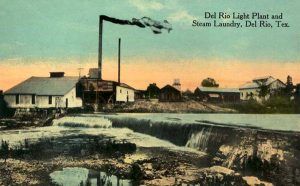 1883 was a busy year for progress in Del Rio, including the establishment of the Val Verde Winery. Founded by Frank Qualia, originally from Milan, Italy, he first settled in San Antonio, but, most of the good land had already been settled. When he heard about the fertile land and water in Del Rio, he moved there in 1881. In 1883, he married a woman named Mary Franke and the two began to plant vineyards to make wine for family and friends in the old country tradition. He received his vintner’s license in 1883 and began commercial operations. During Prohibition, the winery suffered a setback, but the winery held on by producing non-alcoholic drinks and continuing to make wine used for sacramental purposes, which was still legal. Today, it’s Texas’ oldest bonded winery. Still operating, it is run by third-generation vintner Thomas Qualia, with the knowledge and experience that has been handed down for generations. Located at 100 Qualia Drive, the winery is open for visitor tours Monday through Saturday.

Another prominent Italian in early day Del Rio was a man named John Taini. A stonemason, he and his partner, G.B. Cassinelli, worked for the railroad and then for the U.S. Army constructing stone buildings for Fort Clark in Brackettville, Texas. Once the fort was completed, the two moved to Del Rio in the early 1880s. Taini worked to help build several prominent buildings including the Val Verde County Courthouse in 1887, the 1895 Sacred Heart Catholic Church, the 1904 Methodist Church building, as well as several others. 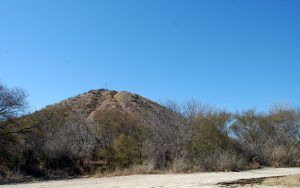 Round Mound Hill of the Cross by Kathy Weiser-Alexander.

This artificial-looking mountain comes with a number of legends, including a tale of townspeople who fought a group of Mexican bandits. In the battle, a number were killed and buried at the base of the mountain. Dona Paula placed the cross at the top of the mound to recognize it as hallowed ground. Other legends associated with the mound revolve around treasure and spirits, which we will bring you later. 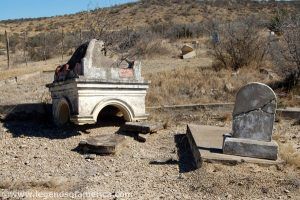 Unfortunately, walking through this historic cemetery is a very sad experience. Beautiful monuments are toppled and lay on the ground, tombstones are cracked and broken, ground-level vaults have been uplifted, and some of them are even partially exposed. At first, I am very angry at the vandalism that has occurred here, until, I conclude that the damage has been caused by flooding. Later, I find out from the Val Verde County Historical Commission, that the damage done to the historic cemetery is actually the result of both flooding and vandalism.

In the same year that the cemetery was established, Del Rio’s first newspaper called the Del Rio Dot was started by Miss Lottie Lyons, with William J. Lyons as its first editor. However, the newspaper was short-lived. It would be a number of years before the next newspaper, the Del Rio Record, was established in 1887. Others followed including the Daily Mirror in 1895 and the Del Rio Daily in 1906. Today, the city is served by the Del Rio Herald-News, which has been operating for more than 70 years

By the spring of 1884, a church was built in Del Rio by the Methodist and Episcopal congregations. Before the wood frame building was erected on Pecan Street, parishioners had met in private homes. Unfortunately, shortly after its completion, the building was blown away by a tornado, leaving the town again without a church. 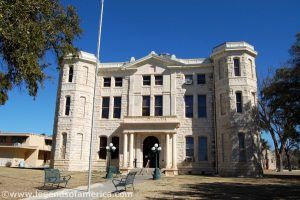 The Val Verde County Courthouse was built in 1887. Originally it was only two stories — a third was added in 1915.

In 1885, Val Verde County was organized from portions of Crockett, Kinney, and Pecos Counties and Del Rio became its county seat. The limestone courthouse was constructed in 1887. Early development in the county was dependent on the railroad, the military, ranching, agriculture, and retail business.

In 1891-92, the Sacred Heart Catholic Church was built at Mill and Losoya Streets. Prior to the time that the beautiful limestone building was constructed, services were first held in private homes and in a wooden house at the same site. The Gothic Revival structure was enlarged and remodeled in 1929. Today, it continues to serve its parishioners.

By 1901, Del Rio received electric power from the ice plant, turned electric light plant. Four years later the city was officially organized in 1905. Doing the business of an organized city, officials were appointed and elected, taxes established, and criminal laws imposed. In these early years, many of the criminal codes were focused on eliminating any “Old West” mentality from the city. Horse racing in the streets, vagrancy, public drunkenness, and swimming nude in San Felipe Creek was prohibited.