So, Indianola, has it been with thee,
Thou once fair city by the moonlit sea!
Thy fame is ended and thy beauty fled.
Bleak memory call thee form the silent dead.
Thy streets are nameless, and seaweeds grow
Along the walks where life did want to flow
Forever dead!
Forever thy dream is o’er!
Thou livist alone on
Memory’s barren shore
The sun that set, yet sets to rise again,
Will smile the same, yet smile on the in vain
While moonbeams dancing as the billows roar,
Will seem as bright, yet dance on’t thee no more. 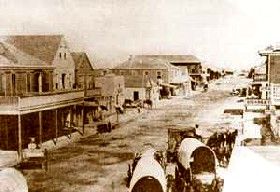 Though mostly gone today, Indianola, Texas was once one of the most important Texas ports along the Gulf of Mexico. Established in 1846 by Sam Addison White and William M. Cook, the first settlement was called Indian Point. At the terminus of the Chihuahaw Trail, the military road to San Antonio, Austin, and Chihuahua, Mexico, as well as the road to San Diego, the town was destined to grow quickly. Anglo-American landowners surveyed the site and began selling lots in 1846 and a year later a post office was opened in September 1847.

Stagecoach service began in the settlement in 1848 as Indian Point became firmly established as a deep-water port. Soon, it became the chief port through which European and American immigrants flowed into western Texas. 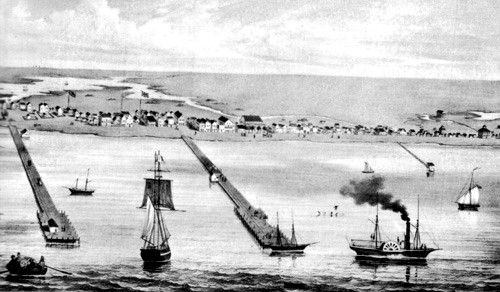 Illustration of Port of Indianola in 1850.

As Indian Point began to grow and merge with the nearby settlement of Karlshaven, the two towns became one and changed its name to Indianola in February 1849. With its rapid growth, the town soon expanded three miles down the beach to Powderhorn Bayou when Indianola was chosen as the terminus to Charles Morgan’s New York-based steamship line.

In 1852 Indianola was made the Calhoun County seat and the first newspaper, called the Bulletin, was established by John Henry Brown. Other newspapers soon followed including the Courier, the Times, and the Indianolan. In 1853, the town was officially incorporated and a new City Hospital was established.

In 1856 and 1857 two shiploads of camels were off-loaded at Indianola. Under the direction of Secretary of War Jefferson Davis, the animals were used in an experiment to transport military supplies through the southwestern United States.

By 1860, the port town, which had quickly rivaled nearby Port Lavaca, had grown to over a thousand people. Though its economy was not based on the plantation culture and few slaves were part of the settlement, the residents voted by a large majority for Texas secession at the start of the Civil War. Calhoun County volunteers became part of the Third Texas Infantry of the Confederate Army. Others from the area joined the Indianola Guards or the Lavaca Guards, which became part of Company A of the Sixth Texas Infantry.

A prime target for the Union, Indianola was bombarded by Union gunboats on October 26, 1862. Afterward, it was looted and occupied for a month before the Union forces withdrew. However, they returned in November 1863 and seized the city again, where they remained until 1864.

By 1870 over 2,000 people inhabited the port city as Indianola grew in importance as a military depot and became the second largest port in Texas. Railroad service from Indianola to the interior began in 1871 and by 1875; Indianola supported a population of more than 5,000 people. 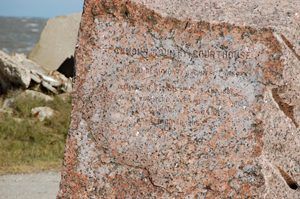 One of the few remains left of the original Indianola is a piece of the old Courthouse. In recent years it was placed near where the county courthouse once stood with this inscription: “Calhoun County Courthouse
Edward Beaumont Architect 1859
During the Storms of 1875 and 1886 precious lives were saved within its walls of shell, concrete and lime. Abandoned 1886″
Photo by Dave Alexander.

Indianola was at the peak of her prosperity when the first hurricane struck the port city. At sea level, the town was extremely vulnerable to tropical storms and on September 16, 1875, it was hit by 110 mile an hour winds which literally blew the town away. Though much of the town was rebuilt, the damage to the town and its economy would never quite recover.

The population began to decline and by 1880 less than 2,000 people remained. A second hurricane struck on August 19, 1886, that was even more destructive than the first. After this second disaster, the town was not rebuilt. In 1887 the county seat was moved to Port Lavaca as well as the post office.  The population of Indianola scattered, many of them also moving to Port Lavaca.

In 1878 the Southern Pacific Railroad bought out the property of the Morgan Lines, which had headquartered at Indianola since the 1850s, and in 1887 reopened the war-damaged railroad. This development, along with the growth of other railroads across the state, reduced Port Lavaca from a major seaport to a fishing center.

Today, Indianola is called home to only a little more than 100 souls. Indianola is located in Calhoun County on the Texas Gulf Coast about ten miles from Port Lavaca on Highway 316. 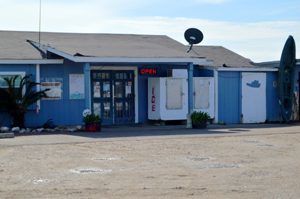 One business remains in Indianola at the marina. 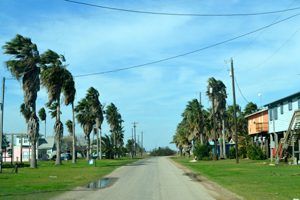 A quiet coastal street in what is left of Indianola, Texas.