Mexican Camp – Located in the Grapevine Mountains about 13 miles west of Rhyolite, was the site of a short-term wood cutting operation during the early years of the Bullfrog boom. Located at a small, intermittent spring, the camp was the headquarters of a group of Mexicans, who cut timber from the surrounding hills, and hauled it to Rhyolite via a trail which connected the camp to Titus Canyon. Operations at the camp appeared to be marginally successful, until the arrival of the Las Vegas & Tonopah Railroad in the Bullfrog District in December, 1906. After that, the Mexicans could no longer compete with the price of lumber brought in by the railroad, and the camp was abandoned. Nothing remains of the camp today.

Monarch Canyon Mine – Founded in 1905, this gold mine was located in the South Bullfrog District in Monarch Canyon, about two miles southwest of Keane Springs. Though never a large operation, a one-stamp mill was built at the site. It operated until about 1910. Today, the remains of the mill cascade down the mountainside. Much of the machinery and controls of the mill are still there, as well a portions of the old tram track, a tunnel adit, and some foundations. The old road to the mine has been long washed out, so access requires a one mile hike. It is located in the northeast portion of Death Valley.

From Beatty, head West on NV-374 for 15.8 miles, then turn left (east) and travel 2.2 miles. Follow the road to the right down into Monarch Canyon, until the road disappears. From here, access requires a hike of about a mile further down the canyon. 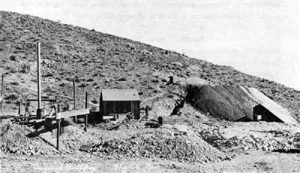 Original – First called Amargosa, this small mining camp grew up near the Original Bullfrog Mine. Later, when the Las Vegas & Tohopah Railroad established a stop just south of the mine, the Amargosa townsite was renamed Original. It soon developed into the major camp in the district, featuring five stores, seven saloons, a restaurant, a post office, and the Hotel Courtmarsh. However, all the businesses were housed in tents and the camp was struggling as there was no close source of water. Due to the high cost of hauling water, the townsite company soon purchased another site, which they called Bullfrog. There are no remains today.

Pioneer – Located between the Mayflower and Pioneer Mines in the northern Bullfrog Hills, the mining camp got its start in  1908. A post office opened in March of the same year. The town grew quickly, soon sporting as many as 2,500 people and a number of businesses including a lumber company, theater, hotels, saloons, restaurants, bakeries, a shoe store, boardinghouses, a cigar store, and a Western Union office. Unfortunately, the very next year, a fire swept through the booming mining camp and burned most of the buildings. Though the town was partially rebuilt, it would never be the same. In 1914, part of the Pioneer Mine collapsed and was forced to shut down along with the mills. It reopened in 1915 and continued through 1931, when it was closed. The post office closed the same year and the town died. Mining continued on a much smaller basis until 1941, but few structures survived through the end of the 20th century. During the years, the district produced $1.6 million worth of ore.

Rose’s Well – Beginning as a stage stop, Rose’s well was, for a time, the only spot between Beatty and Las Vegas that offered shelter, meals, and other accommodations. A well dug at the site yielded 110 barrels of water a day. Later when the Las Vegas and Tonopah Railroad was built through the area, a number of structures were built in 1907, supporting the nearby boom at Lee, California/Nevada. In the beginning, Rose’s Wells was an important way stop, but, was later used as just a water stop for the railroad. It continued to function until the railroad was discontinued in 1918. The site was then abandoned and all that’s left of it today, is the old well. It is located 17 miles south of Beatty.

Rhyolite – Called the Queen City of Death Valley, Rhyolite once boasted a population of 6,000 people. Located in the Bullfrog Hills, about 120 miles northwest of Las Vegas, near the eastern edge of Death Valley, the town began in early 1905 as one of several mining camps that sprang up after a prospecting discovery in the surrounding hills. The financial panic of 1907 caused the boom town to decline and by 1910, it support just 675 people, and was soon abandoned. It is one of the most famous ghost towns in the American West today, due to the large number of still standing buildings. It is a tourist destination today maintained by the Bureau of Land Management. It is located 1.5 miles north of Route 374 near Beatty, Nevada. See full article HERE.

Springdale  – Before the coming of settlers to the area, this site was long used by Native American. Later a number of small ranches were built at the fertile location. In the winter of 1906, it became a watering station on the Bullfrog-Goldfield Railroad. A station house and water tank were built by the railroad and a small settlement grew up around it. By the summer of 1907, it boasted a school, four saloons, a several restaurants, a hotel, livery stable, a popular red light district and a 50-ton mill, which treated ores from nearby mines. It remained an important stop on the Bullfrog-Goldfield Railroad until Pioneer began to decline late in 1911, at which time it had a population of about 75 people. However, when the mill was forced to close, most everyone left and the population at the end of the year was only ten people. The post office closed the following year. Though a fairly substantial town at one time, there are scant remains today. Even the trains stopped running in 1928 and Springdale faded into history. It is located ten miles north of Beatty, Nevada off Highway 95.

Sterling – The Sterling Mine discovery was made in 1869, but it was never extremely productive. By the early 1890’s a small mill was processing the ore. But, activity soon feel off and the site was abandoned. In the early 20th Century, the Ore City Mining Company reopened the Sterling Mine and began intensive operations. Finding both gold and copper at the mine and in other area claims, a townsite was platted at the base of Mount Sterling and before long about 25 residents lived there. But, the town only last for about a year. There are only scant ruins today. It was located about 20 miles north of Pahrump, Nevada.

Strozzi Ranch – Located two miles southeast of the Phinney Mine, or about sixteen miles northwest of Rhyolite, this was the scene of a 1930-era ranching effort in the Grapevine Mountains.

The site was homesteaded by Caesar Strozzi around 1931, and was seasonally used between then and 1947. The ranch is located just north of Brier Springs, which Strozzi used for a water source. During the sixteen years that Strozzi utilized the ranch site, he erected several major improvements. Today the visitor may see the remains of a main house constructed of wood and tin, and several shacks, utilized by the ranching operations. Several fruit trees planted by Strozzi can still be seen in the area.

Telluride – A very small camp it was called Telluride because of the colorful tellurium found in the ore. Very near the camp of Fluorine, it never had a population f more than 25 people and had disappeared from the maps by 1910. Only some small tailing piles mark the site. It was located about 4.5 southeast of Beatty, Nevada.

Transvaal – One of the fastest growing and dying boom towns in Nevada mining history, this camp got its start in February, 1906 when George Probasco found gold in the east of Oasis Valley. By early April there were more than seventy-five tents in the camp, which housed not only some 700 people but also four saloons, an assay office, lumberyard, boarding house, two newspapers, and several other businesses. Two daily stages ran from Beatty to Transvaal every day and the Tonopah & Tidewater Railroad began making plans for a six-mile spur to the camp. However, by the second week of May, it was found that the initial discoveries contained little valuable ore and by the end of the month, everyone was gone. There are no remains except some mine dumps. Located about 12 miles north of Rhyolite the site is difficult to get to.