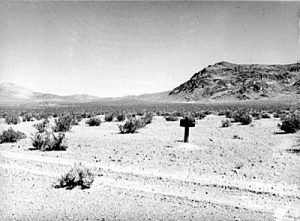 Many believe the lost Breyfogle Mine is in Nye County, Nevada.

Joining the thousands of “49ers” rushing into California were brothers, Charles and Joshua Breyfogle. Hailing from Lockhart, New York, the pair headed west with a train of saddle and draft horses and two wagons in the spring of 1849. They soon teamed up with other pioneers in Columbus, Ohio and continued their long journey to the California goldfields.

After many trials and tribulations through the Indian ridden plains, steep mountains, and harsh desert, they finally reached Sacramento on August 14, 1849.

About a month later the Breyfogles began searching for their fortunes in the promising areas of Butte Creek and the Chico River. Having no success, they had moved on to the Yuba River, some 12 miles above the California gold rush tent city of Marysville, in January 1850.

Again disappointed, they moved upstream a month later to Goodhue’s, where they began to work on a new claim. This time their efforts paid off, as they began to find gold in the river bottom and along the banks above the river.

By December 1850, Charles Breyfogle returned to New York with some $20,000, leaving his brother Joshua to work the claim. A year later, Charles returned to California, settling in Oakland where he was elected county assessor in 1854 and treasurer in 1859.  When he couldn’t account for $6,500 in county funds, he was thrown in jail. Though he was soon exonerated and released, he evidently had had his fill of politics and decided to return to prospecting.

Following the new silver strike in Nevada, he went to Virginia City where the buzz was all about the new finds near Austin, Nevada in 1862. More stories were circulating about gold in the Big Smoky Valley and seeing opportunity, Breyfogle opened a real estate office in a hotel at the mining camp of Geneva. Unfortunately, by the time Charles arrived the Geneva veins were already dwindling and he was once again looking for opportunities.

In 1863, he heard three men at the hotel discussing a crude map. Sure that they were discussing the legendary Lost Gunsight Mine of Death Valley, he decided to follow them when they left the next day. Trailing them across Nevada, he caught up with them between Tonopah and Goldfield, where he was surprised to find that the men were not looking for the lost Gunsight lode, but rather were on their way to Texas to join the Confederate army. The men were on their way to join a wagon train on the Los Angeles trail and Breyfogle decided to ride with them for a couple of days.

Three days later, the men were encamped south of Ash Meadows in the Mohave Desert’s Amargosa River Valley. Laying his bedroll out apart from the others, he awoke in the middle of the night to see Indians attacking the other three men. Grabbing his bedroll and boot, he fled in the darkness.

Without provisions or weapons, he wandered in the desert for several days until he finally found a spring. Resting there, he found gold in a deposit of quartz and took with him several samples, vying to return if he could ever find his way out of the desert. Heading south, he eventually came upon wagon tracks which he followed to Stump Spring in the Pahrump Valley, in Nevada’s eastern Mohave desert.

Deciding to wait at the spring for a wagon train to show up, he was instead found by Indians first. Taking him captive, they worked him as a slave for months. Finally, a Mormon wagon train came upon the Indian village and freed him with a ransom. Taking him to a ranch at Manse Spring in southern Nevada he was cared for by the wife’s owner, Mrs. Yount. Grateful, he told the family about his gold discovery, showing them the samples he had held onto. 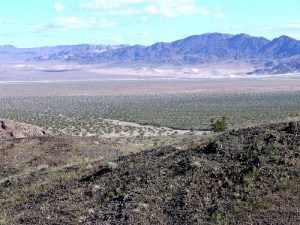 After Breyfogle had fully recovered he settled in Austin, Nevada, where he would organize search parties for the next 26 years. Concentrating on the region northeast of Death Valley, the men would search in vain, never finding that lost outcropping. But Breyfogle never stopped looking, becoming so obsessed with the search that he once said, “I shall come back a rich man or leave my bones in Death Valley.”

Through the years, many theorized as to where Breyfogle had found the gold, believing it to be located near Las Vegas, Salt Spring, or Daylight Pass. However, many believed that the very same rich quartz that Charles had discovered ended up becoming the Johnnie Mine, north of Pahrump, Nevada. The rich lodes of the Johnnie District were first discovered in 1891 by a man named George Montgomery who was searching for the famous Lost Breyfogle Mine. Yet others believe the mine to be in California in the Armargosa River Valley. Though the vast majority believe that Breyfogle’s find was in the Johnnie Mining District, not all researchers and hobbyists are convinced, as they continue to search for Breyfogle’s lost gold.

The Johnnie District is in Nye County, in southwestern Nevada. On the north end of the Pahrump Valley, most of the placer activity was conducted in the washes below the Congress Mine, but also to the northeast of Johnnie on the west slope of the Spring Mountains, and other surrounding areas. To get there, travel south from Las Vegas on Interstate 15 to the junction of State Route 16, then follow northwest past Pahrump for approximately 70 miles to reach the Johnnie District. Here, mines and placers can be seen on both sides of the highway and on the slopes of Mount Schader and Montgomery.