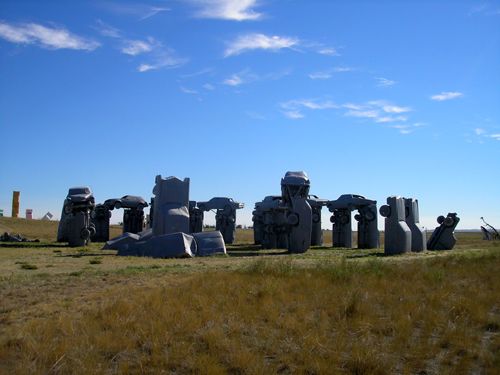 Just north of Alliance Nebraska, along Highway 87, stands a replication of Stonehenge, England’s ancient mystical alignment of stones that chart the sun and moon phases. Nebraska’s Carhenge, created from vintage American-made automobiles, is a unique car sculpture that assumes the same proportions as the original Stonehenge.  Jim Reinders, the artist of this unique sculpture, has experimented with unusual and interesting artistic creations his entire life.  Having had an opportunity to live in England for a time, he studied the design and purpose of Stonehenge.

In the summer of 1987, he, along with the help of family members, built Carhenge with 38 automobiles in a circle measuring approximately 96 feet in diameter. 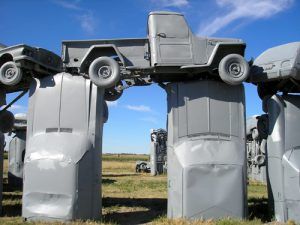 Carhenge in Nebraska along Highway 87 just north of Alliance.

Some autos are held upright in pits five feet deep; the trunk ends down.  Others that are placed to form the arches have been welded in place.  All are covered with gray spray paint.

Carhenge has been preserved by Friends of Carhenge, a local group, now owns and maintains it. Reinders donated the 10 acres of land where Carhenge is located. They have added a paved parking lot, picnic tables, and an educational display board.  Additional sculptures have been erected at the site, known as the Car Art Reserve.

Carhenges’ uniqueness, novelty, and unusual components continue to draw the attention of film and television production crews as well as over 80,000 tourists from all over the world. 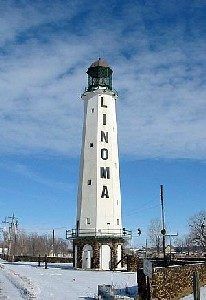 About four miles Northeast of Ashland, Nebraska, is Linoma Beach on the Platte River. The resort opened in July of 1924 and, as part of its maritime theme, constructed a 100-foot tall lighthouse in 1939.  Complete with a spiral staircase to the top observation deck, it is said at one point the lighthouse was fitted for overnight guests, with plumbing, stoves, and windows above the first story.

In 2003, Linoma Beach was listed in the National Registry of Historic Places, and the lighthouse was especially significant as a representation of early 20th Century roadside architecture.