Crookston, Nebraska is just one of the many farming settlements that arose in the 19th century that have been “replaced” by nearby, larger towns. As transportation got easier in the 20th century, bigger towns close to the community offered more goods and services and before long, Crookston was a semi-ghost town.

Crookston is located in the Minnechaduza Valley in north-central Nebraska in Cherry County. When the Fremont, Elkhorn & Missouri Valley Railroads were being built through the area in 1885, a settlement was established to house government warehouses holding supplies for the nearby Rosebud Reservation. The supplies were shipped by rail and then hauled by horse and buggy to the Indians on the nearby reservation. Crookston became known as the “Gateway to the Great Rosebud Reservation.” 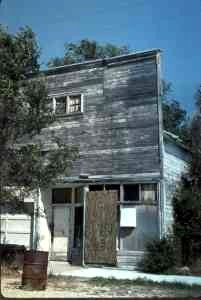 W.T. Crook was the yardmaster for the Fremont, Elkhorn & Missouri Valley Railroad being built through Cherry County and the settlement soon took his name. The area surrounding Crookston drew both farmers and ranchers and the settlement began to grow.

In its first year, School District 16 was organized and a two-story frame building was erected for the children of the community. A post office was established, with Fredrick Baumgartel as its first postmaster, who collected and distributed the mail that was brought to town daily on the passenger train. Dairy farmers soon became an integral part of the community and large quantities of cream were shipped East by rail.

By 1914 there were 600 people living in the town and more children were attending the school which offered grades 1-10. Soon, a new addition was added to the existing school. By this time the town boasted two restaurants, two hardware stores, churches, two banks, garages, and lumberyards. There was also a drug store, meat market, hotel, saloon, elevator, a movie house. Traveling salesmen were often seen going between Crookston and the Rosebud Reservation with their wares.

The Sacred Heart Catholic Church was built in 1917 but is no longer there. In 1940 a new brick school building was completed including high school level classes.

The depression took its toll on Crookston, as it did many small towns. Eventually, both banks closed, along with many other businesses. Later when US-83 bypassed Crookston, in favor of nearby Valentine, it spelled the final demise for the town. 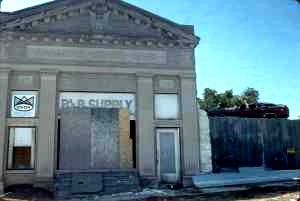 In 1907 the German Lutheran church located south of Crookston was torn down and rebuilt at a new location.

In 1952, the German Lutheran Church built in 1907 was moved inside Crookston and is still in use today. At the present time, the population has dwindled to 69 people, with the only businesses being a post office, school, church, elevator, and a liquor store.

Crookston is in north-central Nebraska in Cherry County.