In 1804, Meriwether Lewis and William Clark began their famous journey of the West. While exploring Nebraska in their expedition, they closely followed the Missouri River in the northeast corner of the state. Today, Nebraska celebrates the pair’s fabled journey along the Lewis & Clark Scenic Byway.

The byway begins just south of Blair, Nebraska and continues north along Highway 75 to South Sioux City for 67 miles. Highway 75 parallels the Missouri River, where a long history of Native Americans, trappers, and traders have left their historical marks.

Traveling along one of Nebraska’s most scenic routes, you will experience lakes, rivers, heavily wooded areas, river bluffs, two Indian Reservations and some of Nebraska’s earliest settlements.

Though the scenic byway actually begins just south of Blair, you might want to begin your trip in Omaha, some 25 miles south of Blair, on Highway 75, and make your journey a fun and historically filled all-day trip.

In Omaha, you can see Fort Omaha, at 30th and Fort Streets, which was the army headquarters during the wars against the Plains Indians, and the home of General George Crook. You can also experience a number of museums, including the Durham Western Heritage Museum, the Great Plains Black History Museum, and the Joslyn Art Museum. Visit the Lewis and Clark Landing to get a virtual taste of the city’s fine food and entertainments, and don’t forget that Omaha is home to Father Flannigan’s Boys Town, where Edward J. Flanagan started programs to help troubled children learn how to become responsible citizens. The village was made famous by the 1938 award-winning movie “Boys Town,” starring Spencer Tracy and Mickey Rooney. Lewis and Clark Landing.

Continuing north along Highway 75 you will soon see the signs pointing to Fort Atkinson State Historical Park just west of the scenic byway. It was at this site that Lewis and Clark met with Native Americans on the “Council Bluff” near the spot where Fort Atkinson was later located. Fort Atkinson was the first and largest military post west of the Missouri River, established in 1820 serving as a garrison for some 1,000 soldiers within its walls. Soon it became an important gateway to the fur region of the Upper Missouri River and the Rocky Mountains. In 1827, the fort was abandoned so that the military could concentrate its efforts further south where there was more traffic going west.

Five miles east of Blair on US Highway 30, you can see another wildlife refuge —  the DeSoto National Wildlife Refuge provides great sights of migrating ducks and geese. Lying in the Missouri River Valley, the refuge is also called home to all manner of wildlife including deer, cottontails, raccoons, coyotes, and fox squirrels. 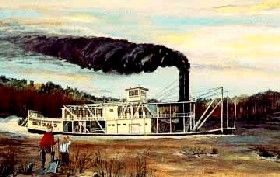 Various trails weave throughout the refuge to allow visitors a chance to enjoy the plant and animal life. In addition to these natural features, you can see the hull of the 178 foot Bertrand steamboat that lies buried in a pond and 200,000 cargo artifacts from the 1865-era steamboat. The Bertrand sternwheeler sank in the Missouri River on its way to deliver mining supplies to Montana in 1865. Fishing and boating are also available. Black Elk/Neihardt Park Home of The Four Winds can be seen in Blair commemorating two great men – Black Elk, a Lakota Sioux Indian chief and John G. Neihardt.

The park includes many reminders of the vision of Black Elk, most prominent being the Tower of Four Winds. This tower stands 45 feet high and includes a tall cross featuring a mosaic composed of approximately 50,000 pieces. The large mosaic features a messiah figure with outstretched arms, while smaller mosaics are located throughout the park. This monument stands as a reminder of Black Elk’s vision of peace and unity for all people. The park is located at College Drive and 32nd Street in Blair.

Continuing onto Tekamah, you can see many historic sites in the town, such as the Tekamah City Bridge, John Henry Stork Log House, the E. C. Houston House, and the Spielman house owned by Delmar and Elaine Chamberlain. The Burt County Museum is located in the E.C. Houston House. 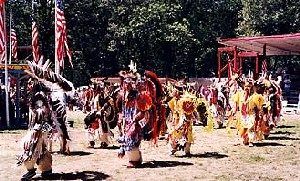 The Omaha Indian Reservation is located along the byway north of Tekamah.  According to oral tradition, the Missouri River was the location where this tribe first settled and have remained in the area for over 400 years. A Harvest Festival Pow Wow is held every August in Macy.

The Winnebago Indian Reservation west of Winnebago is home to an Annual Homecoming Pow Wow held each July that celebrates the homecoming of its last great war chief, Little Priest and 75 of his warriors.

The Pow Wow sports colorful clothing and beautiful singing and dancing in celebration of Little Priest, who was imprisoned in South Dakota along with his warriors after the Winnebago tribe had been uprooted from their Minnesota home and forced to live in South Dakota, and then later in Nebraska. Today, the tribe is promoting tourism and has developed a large bison herd and visitors center where visitors can learn the cultural importance of bison to the Plains tribal culture.