Nebraska, when first made on the map, included all the country from the present Nebraska-Kansas line north to Canada. In this first Nebraska of the early days, in the part that is now Montana, there occurred the remarkable escape of John Colter.

John Colter was a trapper who crossed the continent to the Pacific Ocean with Lewis and Clark. On their way back, in 1806, Colter saw so many signs of beaver on the headwaters of the Missouri  River that he got leave of Captain Meriwether Lewis to stay there and trap. This was in the heart of the country of the terrible Blackfoot Indians. Captain Lewis had killed a Blackfoot warrior who was trying to steal horses and from that time the tribe hated white men and killed them without mercy.

Colter knew all this, but he loved to trap and with another hunter named John Potts he plunged into the wilds of the best beaver streams of the Blackfoot hunting grounds. The two men knew the great risk they ran and they knew also the ways of the Indians. They set their traps at night, took them up early in the morning, and hid during the day.

Early one morning they were softly paddling up a small creek in their canoe to take in some traps when they heard a trampling on the bank. Colter said, “Indians,” and wanted to go back. Potts said, “Buffalo,” and kept on. A few more strokes of the paddle and they were surrounded on both shores by hundreds of Blackfoot warriors who made signs to the trappers to come to them. Since they could not escape, Colter turned the canoe toward shore. As they came to land an Indian seized Potts’ rifle, but Colter, who was a very strong man, wrested it from him and handed it to Potts. The latter killed an Indian with it, but was himself shot full of arrows. 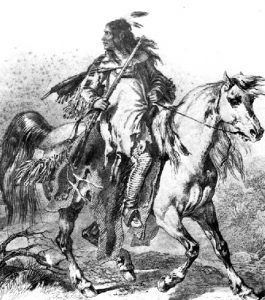 The Indians now took Colter, stripped him, and began to talk about how they would kill him. At first, they were going to put him up as a mark to be shot at, but the chief, desiring to have greater sport, asked Colter if he could run fast. Colter understood enough of their language to tell him that he was a very poor runner, although he was one of the swiftest runners among the hunters. Then the chief took him out on the prairie a few hundred yards and turned him loose to run for his life. The Indians gave their war-whoop and started after him. Colter ran straight across an open plain toward the Jefferson River six miles away.

The plain was covered with cactus, and at every jump, the bare feet of the naked man was filled with cactus thorns. On Colter ran, swifter than he had ever before run in his life, with those hundreds of Blackfoot warriors after him. He ran nearly halfway across the plain before he dared to look back over his shoulder. He saw that he had far outrun all the Indians except one who carried a spear and was not more than a hundred yards behind him.

A faint hope now rose in Colter’s heart, but he had run so hard that blood gushed from his nose and covered his body. He ran on until within a mile of the river, when he heard the steps of the Indian with the spear close behind him and, turning his head, saw he was not more than twenty yards away. Colter stopped suddenly, turned around, and spread out his arms. The Indian, surprised, tried to stop also but was so exhausted that he fell to the ground and broke his spear. Colter at once picked up the point of the spear and with it pinned the Indian to the earth. He then ran on while the other Indians came up to their dead comrade and yelled horribly over his body. Colter, using every moment, soon gained the shelter of the trees on the bank and plunged into the river.

A little below was an island, at the upper end of which was a great raft of driftwood in the water. Colter dived under this raft and after some trouble got his head above the water between large logs which screened him from view. He had hardly done this when the Indians came down the river bank yelling like fiends. They hunted the shores, walked out on the raft of driftwood over Colter’s head, pulling the logs, and peering among them for hours. Once Colter thought they were about to set the raft on fire.

Not until after dark, when the Indians were no longer heard, did Colter dare to venture from his hiding place. He swam down the river a long distance, and then came out on the bank. He was alone in the wilderness, naked, without a weapon, and with his feet torn to pieces by the sharp cactus thorns. He was hundreds of miles from the nearest trading post on the Yellowstone, in a country of hostile savages. But he was alive and fearless and strong.

A week later he reached the trading post, sunburned and starving, but saved.

Written in 1913 by Addison Erwin Sheldon

Continued encounters with the Blackfoot eventually drove Colter to give up trapping and with his proceeds from the fur sales, he moved to New Haven, Missouri where he purchased a farm. In 1810 he married a woman named Sallie. However, his quiet life as a farmer would not last.

In 1812 the United States declared war on Great Britain, and Colter enlisted. Fighting under Nathan Boone, he died while in service for his country. However, after such an eventful life, he died, not by the hand of the British soldiers or the many Indians he encountered in his travels, but by jaundice. After his death, his remains were shipped back to Missouri to his wife, who was said to have buried him on a bluff overlooking the Missouri River near New Haven, Missouri.

Written by Addison Erwin Sheldon in 1913, compiled and edited by Kathy Weiser/Legends of America, updated March 2018.

Excerpted from the book, History and Stories of Nebraska, by Addison Erwin Sheldon, 1913. The text as it appears here is not verbatim, as it has been edited for greater clarification and ease of the modern reader. Addison Erwin Sheldon (1861-1943) was director of the Nebraska Historic Society and wrote numerous books devoted to the history of Nebraska. Many of the photographs and illustrations in his texts were also taken and drawn by Sheldon.