Located in southeast Nebraska in Otoe County is an old path known locally as Seven Sisters Road. According to local legend, seven women were murdered here in the 1900s.

This grisly urban legend, which has been circulating for more than a century, says that there was once a young man who lived along the meandering road in an area known to have had seven hills. Residing on a farm southeast of Nebraska City, he lived with his parents and seven sisters. According to the tale, after having argued with his family, he was very angry. That night, he hid in the woods as his parents left the house one evening, and then, one by one, he either enticed or forced each one of sisters outside with him. The young man then led them to the top of each hill and hanged each one of them from a tree until they were dead.

Afterward, no one knows what happened to the bodies or to the brother. Furthermore, no official reports have been found to substantiate the hangings, but the legend persists.

Seven Sisters Road was built through the hills years after the rumored murders and the hanging trees were chopped down. The hills themselves have also been altered over the years and only four of the hills remain prominent today.

Since that fateful evening so long ago, the area is said to be haunted by the women’s restless spirits. Many tales have been told over the years including the sound of terrified women screaming for help. Others have heard bells ringing that seem to come from a nearby private cemetery.

Many who have driven through the area report having problems with their cars stalling, headlights mysteriously dimming, speedometers freezing, and windows that roll up and down seemingly on their own. 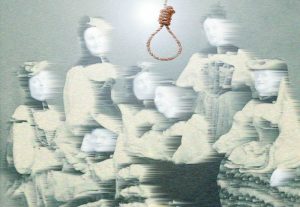 Others report having seen shadowy figures in the darkness, red eyes that appear to be watching them, hear voices and muffled whispers, and experience sudden wind changes.

Both paranormal groups and individuals continue to explore this creepy road, lined by looping hills and twisted trees, and continue to report strange activity.