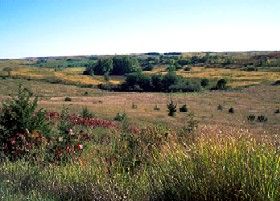 Eight miles north of Decatur, Nebraska, on the Omaha Indian Reservation, is a hill overlooking the Missouri River. At its summit is a mound of dirt nearly 45 feet high, marking the burial place of the great Omaha Indian Chief Blackbird.  The honored Indian Chief was buried here sitting upright on his favorite horse. Back in 1804, Lewis and Clark visited this gravesite, leaving behind decorations to commemorate him.

Blackbird Hill is said to be haunted and every year dozens of people gather at the site, on October 17. However, it is not the ghost of Chief Blackbird who lingers here, but rather that of a young woman murdered upon this hill more than a century and a half ago.

The story begins with a young couple back east who had fallen in love in the early 1840s. When the boy finished his schooling, he planned to travel abroad and then return to marry the young girl.

However, the boy never returned from his trip abroad. The devastated young girl waited for several years, but she finally gave him up for dead and married another man. Soon, the newlyweds headed west, eventually settling in northeast Nebraska, atop Blackbird Hill.

On October 17, 1849, the young girl was astounded when she saw her old fiancé walking up the winding path from the Missouri River to her small cabin. He, too was surprised, having no idea that she lived there.

Overjoyed to see him, she confessed that she had never stopped loving him and only married the other man because she thought he was dead. He then began to convey the tale of his previous years. When traveling abroad, he was shipwrecked but managed to survive. However, it took him almost five years to get back to America. When he arrived home, he was saddened to find that his mother had died and his fiancée had married another man and moved west. Setting out to find her, he joined a wagon train and headed for California, searching everywhere along the way for his long-lost love.

By the time he reached the west coast, he had failed to find her, and heartbroken, he began the long journey home, traveling along the Missouri River. Landing one day at the foot of Blackbird Hill, he saw the winding path up the slope and decided to follow it. That’s when fate intervened and brought the long-lost pair back together.

The girl told him that when her husband returned home, she would tell him that she wished to be released from her marriage vows so they could leave together the next morning. Giving the couple time to discuss the situation, the young man hid in the nearby woods. When the woman’s husband returned home, she explained the situation, but he did not want her to leave and, at first, begged her to stay. When she refused, he began to get angry and soon attacked her with his hunting knife. Screaming, she fell to the floor. The husband then dropped the knife and gathered up his bleeding wife. With her in his arms, he ran to the cliff at the top of the hill and jumped with her into the river far below.

Giving chase, the young man arrived at the hill just in time to see the man leap from the summit and to hear the woman’s final scream of agony. Collapsing with grief, the young man began to wander the hills aimlessly until he was finally found ragged and half-starved by a group of Omaha Indians. Delirious and unable to speak, the Indians carried the man back to their village, where he stayed until he could recover enough to travel.

Today, the path from the cabin to the cliff edge is barren. Even more than 150 years later, no plant life will grow on the path that led to the woman’s death. And, according to the legend, each year, on October 17, the woman’s chilling screams can be heard at the top of the hill. Over the years, dozens of people have reportedly heard her cries of terror.

The Omaha Indian Reservation is located in northeastern Nebraska, just west of Highway 75. Blackbird Hill is eight miles north of Decatur along the Missouri River. The hill is inside the Omaha reservation and not open to the public, but you can climb a nearby scenic overlook to view the river below.