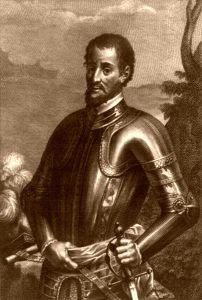 Hernando de Soto was about 36 years old when he was appointed adelantado of Florida. He was “a gentleman by all four descents,” and had recently been created by the Emperor, a knight of the order of Santiago. He had already led a career of adventure not often equaled. He had served under Pedrarias in Nicaragua, and, by his marriage to Pedrarias’ daughter, Dona Isabel, had become brother-in-law to Vasco Nunez de Balboa, discoverer of the Pacific Ocean. Later, in following the fortunes of Francisco Pizarro in Peru, he had “distinguished himself over all the captains and principal personages present, not only at the seizure of Atahualpa (Inca), lord of Peru, and in carrying the City of Cuzco, but, at all other places wheresoever he went and found resistance.” Thus does the Gentleman of Elvas, comrade of Don Hernando and narrator of his exploits, pen his biography in a line. A man of blood and iron, wherever he “found resistance” there, Hernando de Soto was roused to action. He brooked neither opposition from foes nor interference from friends; and, for him, no peril, no hardship, could surpass in bitterness the defeat of his will.

His nature was to be read plainly in his swarthy, strongly lined face and burning black eyes, and in the proud carriage of his head; so that, though he was hardly more than of medium stature, men remarked him and gave him room. He had an agreeable smile at rare moments; he was renowned for courage, and his skill as a horseman was noted among those lovers of horses, the Spanish nobles. He was able to set up a fine establishment and to lend money to Emperor Charles V, from whom he was seeking high office. And so, the Emperor made him Governor of Cuba and adelantado of Florida. Panfilo de Narvaez had pictured in Florida another Mexico. De Soto hoped to find there another Peru.

The news of De Soto’s expedition took his countrymen by storm. When Cabeza de Vaca, fresh from his wanderings, appeared at court and told his great tale, the enthusiasm increased. Rich nobles sold their estates, their houses, vineyards, and olive fields, their plate and jewels, their towns of vassals, to participate in the venture. There, assembled in Seville so many “persons of noble extraction”‘ that a large number of those who had sold all they had were forced to remain behind for want of shipping. De Soto mustered his volunteers for review at the port of Sanlucar. Here, he scanned them carefully and picked out his men, who were then counted and enlisted. They numbered 600. And, considering the small size of the ships of that day, they and their supplies must have been tightly packed in the nine vessels that bore them, from Spain.

On Sunday morning of the day of St. Lazarus, April 1538, Hernando de Soto in a “new ship fast of sail” led his fleet over the bar of Sanlucar, “with great festivity.” From every vessel, artillery roared at his command, and trumpets sounded. Favorable winds urged his vessels on; his adored Dona Isabel was beside him, adventure and fame were before him. On Pentecost Day the ships were moored in the harbor of Santiago de Cuba. All the horsemen and footmen of the town surged down to the landing: and Don Hernando and Dona Isabel, followed by their train of 600, rode into the city, where they were “well lodged, attentively visited, and served by all the citizens.” From Santiago, Don Hernando sent Dona Isabel and the ships to Havana, his port of embarkment for Florida; while with 150 horsemen he made a tour of the cities under his authority. Presently, he heard that his ships bound for Havana had experienced severe storms, which had swept them out of their course and separated them. But, after 40 days, they had all come safely to Havana. Leaving his cavalcade to follow as it might, Don Hernando mounted and made all speed to Havana and Dona Isabel. 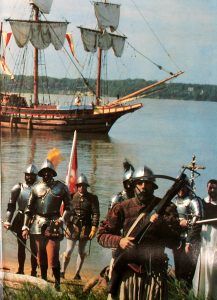 On Sunday, May 18, 1539, De Soto said farewell to his wife and sailed from Havana for Florida, the land still reputed to be “the richest of any which until then had been discovered”; and on May 30th he landed his men near an Indian town on Tampa Bay. Here, the Spaniards immediately had a brush with the natives, who let drive at the armored horsemen with their arrows. Two Indians were killed; the others fled through wooded and boggy country where the horses could not follow.

When the Spaniards lay in the camp that night, they could see flames come out against the blackness, dwindling in the distance to specks like fireflies, as the Indians passed their fiery warning inland. Two days later, they came upon a deserted town of eight huts. De Soto established headquarters there and sent out several companies on horse and foot to explore. He ordered the woods felled “the distance of a crossbow shot” around the town. He set sentinels about the place and detailed horsemen to go the rounds. After having made all secure, he lodged himself in the chief’s house.

There, in the dust flooring, under his torch’s glare, he found a small scatter of pearls. They were ruined by the fire used in boring them for beads; but, to him, they were typical of the jeweled chain of fortune which should link him with greatness to his life’s end and as long after as men’s tongues should wag. So, had Panfilo de Narvaez thought when he found the golden ornament. When the exploring parties returned they could relate that the Indians of Florida were no mean foes. One party brought back six men wounded — one so badly that he died. But, they had captured four women. Another party brought in a man — a white man. This was Juan Ortiz, of noble lineage, and follower of the fortunes of Panfilo de Narvaez, and for the last eleven years a slave among the Indians.

He had entered Florida with Narvaez, but, instead of following his leader inland, had stuck to the ships and had returned to Cuba. Then Narvaez’s wife had sent him back to Florida to look for her husband, and there, he had been taken captive. An Indian girl, he said — apparently a prototype of Pocahontas — had romantically saved his life, just as he was about to be roasted alive at the command of her father. In passing from tribe to tribe, sometimes in barter, sometimes as a fugitive, Ortiz had become conversant with several dialects and he could now play the role of interpreter. To De Soto’s eager inquiries he answered that he had seen no gold nor jewels, but, had heard of a rich country thirty leagues inland. This was enough. De Soto now dispatched his ships to Cuba for more supplies and ordered his company to make ready to march. This was the beginning of three years of restless wandering, in the course of which De Soto and his men traversed Florida, Georgia, Carolina, Tennessee, Alabama, Mississippi, Arkansas, Oklahoma, Louisiana, and Texas.

Leaving at the camp, a garrison of 50 footmen with 30 horses and food for two years, on August 1, 1539, De Soto set out. In his train, were some 550 lancers, crossbowmen, and arquebusiers; about 200 horses, a number of priests and Dominican friars — with the sacred vessels, vestments, and white meal for the Mass; a physician and his medicines; a ship’s carpenter, caulkers, and a cooper for the boat-building that might be necessary on inland waters — perhaps to construct a ship to bear Don Hernando to China by that fabled waterway Columbus had not found. And, there were armorers and smiths, with their forges and tools, for mail shirts must be mended at times, swords tempered, and the great bulk of iron chains and iron slave-collars kept in good repair.

They were bound northwestward to the country of Cale. Indians had told them that beyond Cale, “towards the sunset,” lay a land of perpetual summer where there was so much gold that, when its people came down to war with the tribes of Cale, “they wore golden hats like casques.” On towards that land of golden hats went the Spaniards; over the low thicketed country full of bogs and swamps, where the horses, weighted by their own armor and their heavily accoutered riders, mired and floundered. They crossed several small rivers on logs, swimming the horses over by a hawser. This was not the country, “very rich in maize,” which Indians had told them stretched along the way to Cale. Pinched by hunger, the Spaniards ate young palm shoots and watercresses “without another thing.” And, from the thickets about the bogs and marshes, invisible Indians sent a rain of arrows upon them.

They were bound northwestward to the country of Cale. Indians had told them that beyond Cale, “towards the sunset,” lay a land of perpetual summer where there was so much gold that, when its people came down to war with the tribes of Cale, “they wore golden hats like casques.” On towards that land of golden hats went the Spaniards; over the low thicketed country full of bogs and swamps, where the horses, weighted by their own armor and their heavily accoutered riders, mired and floundered. They crossed several small rivers on logs, swimming the horses over by a hawser. This was not the country, “very rich in maize,” which Indians had told them stretched along the way to Cale. Pinched by hunger, the Spaniards ate young palm shoots and watercresses “without another thing.” And, from the thickets about the bogs and marshes, invisible Indians sent a rain of arrows upon them.