Natchez Trace Parkway from milepost 31 to 60 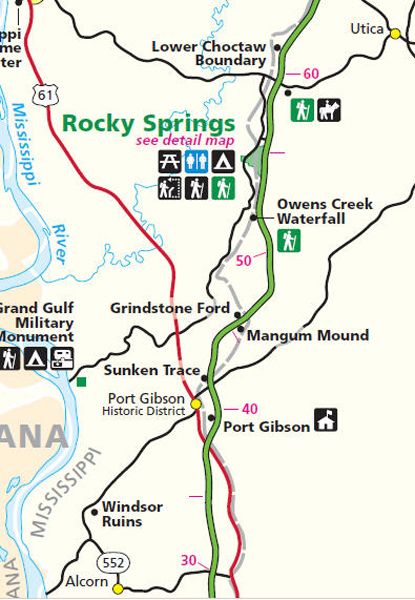 Side Trip – Windsor Ruins Loop Route – This 32-mile long loop through Alcorn and Port Gibson, Mississippi, provides a number of interesting stops. The loop is comprised of 20 miles along Mississippi Highway 552/Rodney Road, 7 miles along the Natchez Trace Parkway from milepost 30 to 37, and five miles through the town of Port Gibson and back to the Trace.

Alcorn University – Alcorn is the oldest public historically black land-grant institution in the United States and the second-oldest state-supported institution of higher learning in Mississippi. The school began in 1830 when Dr. Jeremiah Chamberlain founded Oakland College. The early years of Oakland College were characterized by growth and optimism. However, when founder and president Dr. Jermiah Chamberlain died in 1851, it began to decline. Chamberlain, an ardent Unionist and Whig, was assassinated on the campus by a secessionist. Oakland College closed its doors at the beginning of the Civil War so that its students could fight for the Confederate States of America. When the college failed to reopen at the end of the war, the property was sold to the state of Mississippi. In 1871 Alcorn University was established by the Reconstruction era legislature to provide higher education for freedmen. It was the first black land grant college in the United States. It was named in honor of James L. Alcorn, then the state’s governor. Alcorn began with eight faculty members, and at first, it was exclusively for black males. In 1895, women were admitted. Today the faculty and staff number more than 500. The student body has grown from 179 mostly local male students to more than 4,000 students from all over the world. The oldest building on the campus is the Oakland Chapel, a Greek Revival style structure built in 1838. 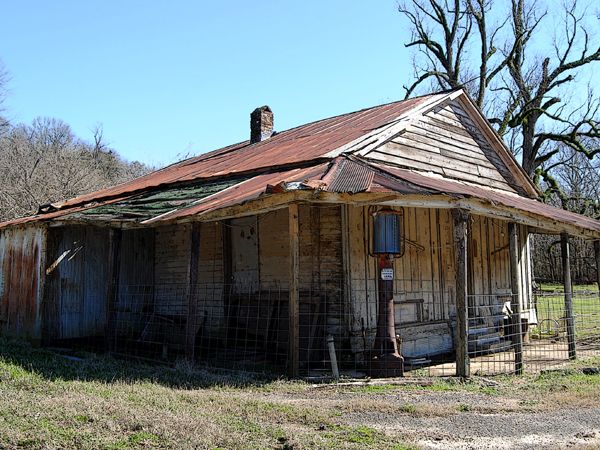 Side Trip – Rodney Ghost Town – 4.8 miles southwest of Alcorn on Rodney Road is an interesting old town called Rodney. It was once so important that it almost became the capital of Mississippi. In the 1860s, it boasted 4,000 people and was the Mississippi River’s busiest port between New Orleans, Louisiana and St. Louis, Missouri. However, the mighty Mississippi River changed its course, forever altering the fate of Rodney. Its population immediately decreased, and today it is a ghost town with only a handful of area residents.

Canemount Plantation – About a mile north of Alcorn, you’ll see the Canemount Plantation on the east side of the road. The centerpiece is the Italianate Revival home built in 1855, but there are several other buildings dating back to 1826. It is privately owned. 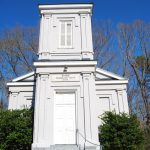 Bethel Church – A mile north of Canemount Plantation is the historic Bethel Presbyterian Church organized in 1826. The building was constructed in the mid-1840s. During General Ulysses S. Grant’s campaign to take Vicksburg, he landed his troops east of the Mississippi River just a few miles from here at Bruinsburg. His troops passed Bethel Church on April 30th, 1863, moving to Port Gibson on Rodney Road. A tornado destroyed the original pointed steeple in 1943.

Windsor Ruins – Built just before the Civil War, Windsor was one of the area’s largest plantations. Leading up to the Battle of Port Gibson in the spring of 1863, Confederate troops used the roof observatory as a lookout as General Ulysses S. Grant’s army crossed the Mississippi River. After the battle, the mansion was used as a Union hospital and observation post, sparing it from being burned by Union troops. Unfortunately, in 1890 a house guest left a lighted cigar on the upper balcony, and Windsor burned to the ground. Everything was destroyed except 23 of the columns, the balustrades, and the iron stairs. 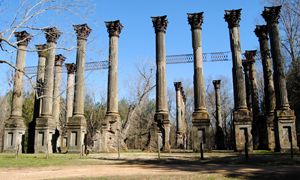 A.K. Shaifer House – The first shot of the Battle of Port Gibson was fired at the Shaifer House on May 1, 1863. General Ulysses S. Grant’s army, after marching past Bethel Church and the Windsor plantation, first encountered Confederate troops on the way to Port Gibson here. Built about 1840, the Greek Revival style cottage remained in the midst of heavy military action, and numerous holes can still be seen on the back of the house. It served for a time as Union Headquarters and as a hospital. The ground on which the house stands, “The Port Gibson Battlefield,” is included in the National Register of Historic Places.