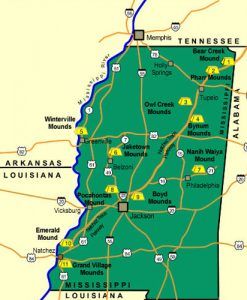 Grand Village of the Natchez – Natchez

Although the first people entered what is now the Mississippi about 12,000 years ago, the earliest major phase of earthen mound construction in this area did not begin until some 2,100 years ago. Mounds continued to be built sporadically for another 1800 years, or, until around 1700 A.D. Over hundreds of years, there were thousands of mounds constructed for various purposes. However, only a small percentage of these remain today. 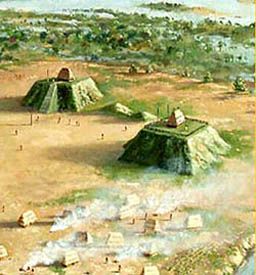 The shapes and purposes of the mounds varied. They might stand alone or be in groups of as many as 20 or more, as at Winterville. Some mounds are arranged around broad plazas, while others are connected by earthen ridges. They can be flat-topped pyramids, rounded domes, or barely perceptible rises on the landscape. How these early people used some of the mounds is shrouded in mystery. Others are known to have been burial mounds, where the people interred their dead with great ceremony. Other cultures built temples atop the mounds, and worshipers approached by climbing steep stairs or ramps. Still, other earthworks were symbolic pinnacles of power for leaders who dwelled atop them.

To build many of these mounds, it would have taken groups of workers toiling from dawn to dusk, gathering baskets of dirt. They then would have carried their burdens to a clearing, dump the soil, and tamp it down with their feet. As the days passed, they would retrace their footsteps time after time until the mound began to grow. Over years of ceremonial use, multiple layers of earth were often added during repeated episodes of construction, gradually building a mound of impressive height. Variations of this scene were repeated throughout Mississippi over a span of at least 1,800 years.

Regardless of the particular age, form, or function of individual mounds, all had deep meaning for the people who built them. Many earthen mounds were regarded by various American Indian groups as symbols of Mother Earth, the giver of life. With such sacred associations, mounds were powerful territorial markers and monuments of social unity, reinforcing and perpetuating community identity and pride. 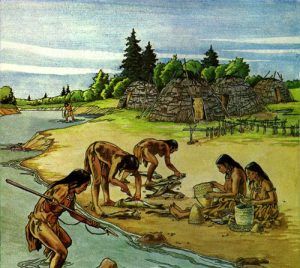 The Middle Woodland period (100 B.C. to 200 A.D.) was the first era of widespread mound construction in Mississippi. Middle Woodland peoples were primarily hunters and gatherers who occupied semi-permanent or permanent settlements. Some mounds of this period were built to bury important members of local tribal groups. These burial mounds were rounded, dome-shaped structures that generally range from about three to 18 feet high, with diameters from 50 to 100 feet. Distinctive artifacts obtained through long-distance trade were sometimes placed with those buried in the mounds. The construction of burial mounds declined after the Middle Woodland period, and only a few were built during the Late Woodland period (circa 400 to 1000 A.D.). Woodland burial mounds can be visited at the Boyd, Bynum, and Pharr sites and at Chewalla Lake in Holly Springs National Forest.

The Mississippian period (1000 to 1700 A.D.) saw a resurgence of mound-building across much of the southeastern United States. At this time, the lower Mississippi Delta was home to highly organized societies. There were roads, commerce, and cultural centers anchored by these awe-inspiring earthen monuments. Wonders of geometric precision, these earthworks were the centers of life. Mississippian period mound sites mark centers of social and political authority. They are indicators of a way of life more complex than that of the Woodland and earlier periods. In contrast to the relatively simple, egalitarian tribal organization of most societies of the Woodland period, regional Mississippian populations were typically organized into chiefdoms–territorial groups with hereditary, elite leadership classes. Across the Southeast, the chiefdom system of political organization arose as a means of managing increased social complexity caused by steady population growth. This population growth was sustained by growing corn, beans, and squash — a revolutionary new means of subsistence that became an economic mainstay during the Mississippian period. Most Mississippian mounds are rectangular, flat-topped earthen platforms upon which temples or residences of chiefs were erected. These buildings were constructed of wooden posts covered with mud plaster and had thatched roofs. Mississippian platform mounds range in height from eight to almost 60 feet and are from 60 to as much as 770 feet in width at the base. Mississippian period mounds can be seen at the Winterville, Jaketown Pocahontas, Owl Creek, and Bear Creek sites. 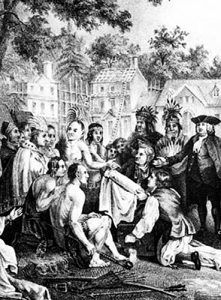 However, mound construction was in a period of decline in the 1500s, when the first Europeans arrived in the region. Shortly thereafter, epidemic diseases introduced by early European explorers decimated native populations across the Southeast, causing catastrophic societal disruption. As a result, by the time sustained contact with European colonists began in about 1700, the long tradition of mound-building had nearly ended.

Today, visitors come face to face with a rich legacy of American Indian cultural achievement. Many diverse Indian groups, drawn by the bountiful wildlife, warm climate, and fertile soil, made their homes in what is now Mississippi for thousands of years before the first Europeans and Africans arrived. Mounds built of earth are the most prominent remains left on the landscape by these native peoples. Offering much more than a tour through thousands of years of Mississippi history, the mounds stand as testaments to the American Indian presence on the landscape and as monuments to the first inhabitants of the southeastern United States.

Though many of the mounds in Mississippi are on privately owned land, they are protected by state and federal laws. In years past, many mounds were irreparably damaged or completely destroyed by modern development and looting. Those mounds that remain stand as a testament to the vitality, diversity, and creativity of their makers, who developed the complex societies of long ago.

Please be aware that unauthorized digging, removal of artifacts or human remains, or other disturbance of the mounds and surrounding grounds are strictly prohibited and violators are subject to prosecution.

The mounds described in this article date from approximately 100 B.C. to 1700 A.D. and are representative samples of sites that were originally so numerous.

7 thoughts on “Mound Builders of Mississippi”