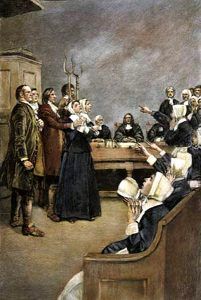 Sarah Proctor (1676-17??) – The daughter of John and Elizabeth Bassett Proctor, she was accused of witchcraft in May 1692 and imprisoned. Born in what is now Peabody, Massachusetts on January 28, 1676, she was 16 years old when, on May 20, 1692, 18-year-old Elizabeth Booth named her as a witch, claiming that she had brought her the Devil’s book and told her to put her hand on it. When Elizabeth refused, Sarah began to afflict her. She would also say that Sarah’s parents, John and Elizabeth Proctor were also tormenting her by pinching and pricking. The next day, on May 21st, a complaint was sworn out against her by Thomas Putnam and John Putnam of Salem Village. The complaint, which also named her Aunt, Sarah Hood Bassett, and a woman named Susannah Roots of Beverly, accused the three of afflicting Mary Walcott, Abigail Williams, Mercy Lewis, and Ann Putnam, Jr. On May 23rd, Elizabeth Booth was deposed saying that Sarah Proctor and her Aunt, Mary Bassett DeRich, had appeared to Elizabeth in the night and afflicted her, by pinching and choking her. Once again, she also named Sarah’s parents, John and Elizabeth. Also deposed was Susanna Sheldon who accused Sarah as well as a Mr. Andrews, and George Jacobs, of bringing her the Devil’s Book and threatening to cut her throat. In the deposition of Thomas Putnam, he would say that Sarah had tortured and afflicted Elizabeth Hubbard and Ann Putnam, Jr., testimony which would be echoed by John Putnam, Jr. More testimony was given by 23-year-old David Ferneaux, and 21-year-old Jonathan Walcott, Jr. who would say that they had heard Mary Walcott, in one of her fits, say that she had seen the apparition of Sarah Proctor, who had come to hurt her by choking and pinching her and urging her to write in the Devil’s book. With all this testimony, it comes as no surprise that Sarah was imprisoned. However, she doesn’t appear to have ever been tried, and some point she was released. She would later marry Edward Munion in 1696. No further information is known about her.

William Proctor (1675-??) – The oldest son of John and Elizabeth Bassett Proctor, William was born on February 6, 1675, in Salem, Massachusetts. On May 28, 1692, a warrant was issued for his arrest accusing him of afflicting Mary Walcott and Susanna Sheldon. Testifying against him and adding more accusations would be Elizabeth Hubbard and Mary Warren. Based on their testimony, William Proctor was indicted for witchcraft and imprisoned. When he was examined on September 8, 1692, Elizabeth Hubbard would say that William had afflicted her in May and that she had also seen him afflict Mary Warren. He was examined again on September 17th, where Mary Warren would testify that William Proctor had almost murdered her by inflicting pain in her bones and her insides. She also said that she saw him afflict Mary Walcott, Elizabeth Hubbard, and Ann Putnam, Jr. who had dreadful fits. If that wasn’t enough, she went on to testify that she had seen him twist and pinch poppets to cause the afflictions. How long William was imprisoned or when he was released is unknown. Some records indicate that he died in Maine in 1695, while others indicate that he married a woman named Jemima Collins in Lynn, Massachusetts on November 12, 1727.

In 1692, 141 complaints were filed against people accused of witchcraft. Twelve of these were against relatives of the Proctor family. Of the immediate family, John and Elizabeth Bassett Proctor were the only ones convicted, and John Proctor was the only one executed. However, in the extended family, Rebecca Towne Nurse and Mary Towne Easty were also hanged.

There was also one family member among the accusers; John De Rich, son of Mary Bassett and her husband, Michael DeRich. 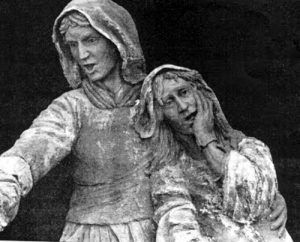 Sarah Towne Cloyce – The sister of Rebecca Towne Nurse and Mary Towne Easty. She was accused of witchcraft but, never indicted by a grand jury in the Salem Witch Trials. Her sisters would not be so lucky, both were hanged. The relationship between the Townes and Proctors was through the marriage of Elizabeth Proctor, the daughter of John Proctor and his second wife, Elizabeth Thorndike. Elizabeth married Thomas Very in 1681. His sister, Elizabeth Very, was the second wife of John Nurse, the eldest son of Rebecca Towne Nurse.

Mary Towne Easty – Mary was the 58-year-old sister of Rebecca Towne Nurse and Sarah Towne Cloyce, who were also accused of witchcraft. She was tried and condemned to death on September 9, 1692. She was hanged on September 22, 1692.  The relationship between the Townes and Proctors was through the marriage of Elizabeth Proctor, the daughter of John Proctor and his second wife, Elizabeth Thorndike. Elizabeth married Thomas Very in 1681. His sister, Elizabeth Very, was the second wife of John Nurse, the eldest son of Rebecca Towne Nurse.

Thomas Farrar, Sr. – The elderly Mr. Farr was accused of witchcraft and spent five months in prison before he was released. His relationship to the Proctors was via Elizabeth Bassett Proctor’s sister-in-law, Sarah Hood Bassett. Her sister was Elizabeth Hood Farrar, who was Thomas Farrar, Sr.’s daughter-in-law.

Elizabeth Hutchinson Hart – Arrested in May 1692, Elizabeth would be imprisoned in Boston until December 1692. The relationship to the Proctors was via John’s brother, Benjamin who was married to Deborah Hart, Elizabeth’s sister.

Rebecca Towne Nurse – Arrested for witchcraft in March 1692, this came as a shock to the community and to John Proctor who would speak out angrily about her arrest. Rebecca was 71 years old at the time of her arrest and had long since acquired a reputation for exemplary piety in the community. Although a large number of friends, neighbors and family members wrote petitions testifying to her innocence, she was tried for acts of witchcraft in June 1692. Convicted she was hanged on July 19, 1692. The relationship between the Townes and Proctors was through the marriage of Elizabeth Proctor, the daughter of John Proctor and his second wife, Elizabeth Thorndike. Elizabeth married Thomas Very in 1681. His sister, Elizabeth Very, was the second wife of John Nurse, the eldest son of Rebecca Towne Nurse.

An Accuser in the Family

John De Rich (1676?-??) – The son of Michael and Mary Bassett De Rich, instead of being one of the accused in the Proctor/Bassett family, he was an accuser. He was 16 years old when the witch hysteria broke out in 1692. That summer, with his mother in prison in Boston, and his father dead, he joined the many others who had already accused Elizabeth Bassett Proctor. On August 4th, he not only gave testimony against his Aunt Elizabeth, but, also against her husband, John Proctor, George Jacobs, Sr., Sarah Pease, Alice Parker, Philip English and his wife Mary, Alice Parker, Abigail Hobbs, and others. He would say that a man named John Small and his wife, who were both dead and formerly of Salem Town, had appeared to him saying that George Jacobs, Sr. had killed them. He also said that Marry Warren’s mother had been killed by Alice Parker. He accused a number of people of afflicting him, including Sarah Proctor, Joseph Proctor, and John Proctor; Phillip and Mary English. Of George Jacobs, Sr., he would say that George afflicted him by pinching, scratching and biting him and that if John did not swear on the Devil’s book, he would drown him. He would also say that Sara Pease afflicted him by pinching him.  He would later marry Martha Foster on October 25, 1698. She was the daughter of John Foster, who was a member of the Governor William Phips Council.