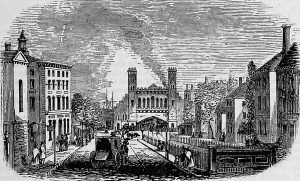 Salem Towne in its early years.

1626 – A village is settled  in Naumkeag, Massachusetts, which was later renamed Salem.

1636 – Salem Village is settled by farmers about five miles north of Salem Towne.

1648 to 1663 – The first massive witch hunt occurs throughout New England. About 80 people were accused of practicing witchcraft during these years.

June 15, 1648 – The first execution for witchcraft known in New England occurs. Margaret Jones of Charlestown in Massachusetts Bay Colony, a herbalist, midwife and self-described physician, was hanged. Twelve more women and two more men would be executed before the witch hunt ended in 1663.

1669 – Susannah Martin was accused of witchcraft in Salisbury, Massachusetts. She was convicted, but a higher court dismissed the charges.

October 8, 1672 – Salem Village becomes a separate parish from Salem Towne and was authorized by a General Court order to tax for public improvements, hire a minister and build a meetinghouse.

1673 – 1679 – James Bayley serves as minister of the Salem Village church. Controversy over whether to ordain Bayley, over failure to pay, and even for slander, made their way into lawsuits. Because Salem Village was not yet fully a town or church, Salem Towne had a say on the future of the minister.

1679 – Simon Bradstreet becomes governor of Massachusetts Bay Colony. Bridget Bishop of Salem Village was accused of witchcraft, but the Reverend John Hale testified for her and the charges were dropped

1680 – In Newbury, Elizabeth Morse was accused of witchcraft. She was convicted and sentenced to death, but was reprieved.

1680-1683 – The Reverend George Burroughs served as minister of the Salem Village church. As with his predecessor, the church would not ordain him, and he left in a bitter salary dispute, at one point being arrested for debt.

1684 – The Reverend Deodat Lawson became the minister in Salem Village.

October 23, 1684 – The Massachusetts Bay Colony charter was annulled and self-government ended. Sir Edmund Andros was appointed governor of the newly-defined Dominion of New England. He was not popular to the residents.

1685 – Cotton Mather is ordained. He was the son of Boston’s North Church minister Increase Mather, and joined his father there.

1687 – Bridget Bishop of Salem Village was accused for a second time of witchcraft and acquitted.

Spring, 1688 – Like his predecessors, the Reverend Deodat Lawson is not ordained and is not always paid. He leaves Salem Village. 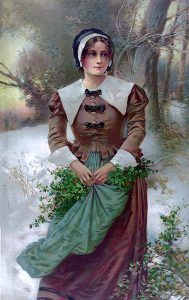 Summer, 1688 – Ann “Goody” Glover is accused of bewitching John Goodwin’s children in Boston who have taken ill. After a doctor suggested it was caused by witchcraft, Ann Glover is arrested. With language being a barrier in the trial, she is convicted of witchcraft.

June, 1688 – The Reverend Samuel Parris arrived in Salem Village as a candidate for the position of Salem Village minister. He would later become their first fully ordained minister.

November 16, 1688 – Ann “Goody” Glover is hanged for witchcraft in Boston. She is the last “witch” to be hanged in that city.

1689 – Increase Mather and Sir William Phips petitioned William and Mary, new rulers of England, to restore the charter of the Massachusetts colony.

Boston Minister, Cotton Mather, who had been involved in the Ann Glover’s trial for witchcraft, publishes Memorable Providences, which relates to witchcraft and possession.

Benjamin Holton died in Salem Village, and the doctor attending could not identify a cause of death. His death would later be brought out as evidence against Rebecca Nurse in 1692.

October, 1689 – The Salem Village church granted Reverend Samuel Parris a full deed to the parsonage, apparently in violation of the congregation’s own rules.

November 19, 1689 – The Salem Village church covenant was signed, including Reverend Samuel Parris and 27 full members. Parris is officially ordained at the church.

October 16, 1691 – Some villagers vow to drive the Reverend Samuel Parris out of Salem Village and stop contributing to his salary. Parris soon began to preach about a Satanic conspiracy in town against him and the church.

Winter, 1691-92 – Nine-year-old Elizabeth Parris and her cousin, Abigail Williams, daughter and niece of the Reverend Samuel Parris, respectively, begin to experiment with fortune-telling, a forbidden past time in the Puritan colony.

January 8, 1692 – Representatives of Salem Village petitioned Salem Towne to recognize the village’s independence, or at least to tax Salem Village residents only for Salem Village expenses.

“People were Accused, Examined, Imprisoned, and came to their Trials, where about Twenty of them Suffered as Witches; and many others in danger of the same Tragical End: and still the number of the Accused increased unto many Scores; amongst whom were many Persons of unquestionable Credit, never under any grounds of suspicion of that or any other Scandalous Evil.” — Reverend John Hale