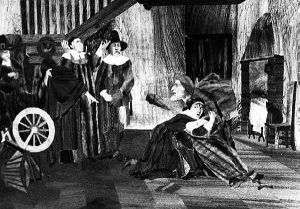 Sarah Warren Prince Osborne (1643?-1692) – One of the first three women to be accused of witchcraft in the Salem witch trials of 1692, Sarah is sometimes referred to as “Goody Osborne,” Goody being short for “Goodwife” and at the time a form of address for old women of lowly social status. Born Sarah Warren in Watertown, Massachusetts in about 1643, she grew up to marry a prominent man by the name of Robert Prince of Salem Village. She moved with her husband to Salem Village in 1662, where Robert owned a 150-acre farm next to Captain John Putnam’s, who was also his brother-in-law. There, the couple would have three children. Unfortunately, Robert Prince died in 1674, leaving Sarah Prince a widow. He left his land entrusted to Sarah with the provision that upon their sons’ coming of age, it be given to them. However, at that time, the two boys, James and Joseph, were only six and two-years-old, respectively. Soon after her husband’s death, Sarah hired an indentured Irish immigrant by the name of Alexander Osborne as a farm hand, and at some point, paid off his indenture. Rumors quickly spread that Sarah Prince and Alexander Osborne were “living together” and the pair eventually married. Afterwards, Sarah attempted to overtake her children’s inheritance and seize control of the estate for herself and her new husband. However, the powerful Putnam family would defend the rights of her sons in an extensive legal battle. The conflict was still ongoing when Sarah Osborne became one of the first three persons accused of witchcraft in February 1692.

Sarah was accused by Thomas Putnam, Jr, Edward Putnam, Joseph Hutchinson, and Thomas Preston for afflicting Ann Putnam Jr., Elizabeth Parris, Abigail Williams, and Elizabeth Hubbard. Unlike the other two women accused with her, Tituba and Sarah Solart Poole Good, Osborne never confessed to witchcraft nor attempted to accuse anyone else. A warrant for her arrest was written on March 1st. She was the second of the original three to be examined and denied all the accusations against her. In her own defense, she was the first defendant to assert in her defense the theological claim that the devil could take the shape of another person without their compliance — a view that eventually prevailed and brought the Salem trials to a halt. However, the words of Sarah Good’s examination were twisted to accompany the “afflicted girls” accusations towards her and later, Tituba would claim that the three of them were indeed working with the Devil. After the examination she was over, she was placed in a Boston Jail to await her trial. However, Sarah, who had been ill for some time prior to her arrest would never be tried. She died, shackled in prison on May 10, 1692, at the age of 49.

Mary Clements Osgood (1637?-1710) – Born in England in 1637, her father was Robert Clements. When her father immigrated to America in 1642, five-year-old Mary was left with relatives. She later joined her father who was serving as a magistrate in Haverhill. When she married John Osgood, Jr. in November 1653, her father performed the ceremony. Of Andover, John Osgood was a man of prominence, who had served thirty years in military service in which he had attained the rank of captain, was one of the first settlers in Andover and a church founder, was the first representative to the General Court from Andover, and owned a considerable amount of land. The couple would have one daughter they named Constance. Though Mary was described as a remarkably pious and good woman, she was accused of witchcraft. When she was examined, she was 68 years old. Though it is known that she spent some time in jail, she was later released, probably on bond. Her husband died on August 21, 1693. Mary lived until October 27, 1710.

Elizabeth Carrington Paine (1636?-1711) – Of Malden, Massachusetts, Elizabeth was married to Stephen Paine. A complaint of witchcraft was made against her on May 30, 1692, by Lieutenant Nathaniel Putnam and Joseph Whipple of Salem Village, for afflicting Mercy Lewis and Mary Warren. A warrant was issued on June 2nd, and Elizabeth was brought in for examination the next day. While it is known that she was imprisoned, there is nothing more known of the disposition of the complaint. 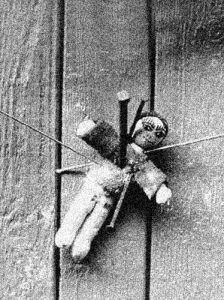 Alice Parker – (??-1692) – A resident of Salem Towne, Alice was executed on September 22, 1692, during the Salem Witch Trials. She was married to a fisherman named John Parker and was but a simple housewife known to be a woman of good faith and good deeds when she was accused of witchcraft by Mary Warren. Alice was first examined on May 12, 1692, where Mary Warren implied that Alice Parker had murdered her mother. She would state that shortly after Alice had visited their home, Mary’s sister and mother had taken ill, and her mother died. She also said that Alice Parker had brought a poppet to her, threatening to stick a needle into its heart, thereby afflicting Mary Warren. Further testifying, Warren would say that Alice Parker had told her that she had attended a Bloody Sacrament meeting with about 30 other witches. The entire time that Mary Warren was giving her testimony, it was interrupted by periodic fits. Alice Parker stated her innocence from the beginning and maintained her innocence until her death. More people would testify against her through depositions and at her trial, stating that she had sent animals to attack people for her. Testifying against her were Martha Dutch, Sarah Bibber, Mary Walcott, Abigail Hobbs, Elizabeth Hubbard and Ann Putnam, Jr. At her trial in September, Mary Warren would further accuse her of being the cause of several other area deaths. Alice Parker was found guilty and condemned to die on September 9, 1962. She was hanged on September 22, 1692.

Mary Ayer Parker (mid-1600’s-1692) – Of Andover, Massachusetts, Mary Ayer Parker was executed on September 22, 1692, with several others, for witchcraft in the Salem witch trials. Fifty-five years old and a widow at the time of her arrest, Mary was born to John and Hannah Ayer. From England, the family moved to America somewhere along the line, settling in a couple of places, before they finally landed in Haverhill in about 1646. Mary Ayer grew up to marry Nathan Parker and the couple had at least eight children. Over the years, her husband Nathan increased his land holdings from just his house lot and four acres to more than 200 acres. When Nathan died on June 25, 1685, he left an ample estate to his wife and children. Mary inherited one-third of the house and lands.

Though there was no documented friction with any of her neighbors, nor any no prior accusations of wrongdoing, Mary Ayer Parker was accused of having afflicted Sarah Phelps, Hannah Bigsby, and Martha Sprague of witchcraft. William Barker, Jr. named her in his confession on September 1, 1692, testifying that he and Goody Parker had afflicted Martha Sprague and that the two of them had ridden upon a pole and had been baptized in Five Mile Pond. Mary Parker was examined on September 2, 1692, where several “afflicted girls” from both Andover and Salem Village fell into fits. These included Mary Warren, Sarah Churchill, Hannah Post, Sara Bridges, and Mercy Wardwell. When the “touch test” was employed during the examination, the girls were “cured.” Mercy Wardwell and William Barker, Jr. would also say that she had tortured Timothy Swan with iron spindles, pins, and other instruments. Mary Ayer Parker was found guilty of witchcraft on September 16, 1692, and she was executed just six days later on September 22, 1692.

Interestingly, regarding Mary Ayer Parker and the fact that she had no conflicts with anyone in Andover or in Salem Village, are questions about why she was targeted, and even if she was the correct woman who was arrested. At that time, there was another woman who lived in the area who was also named Mary Parker. That particular Mary Parker had been taken to court a number of times. In 1669 she was sentenced for fornication. In 1672, the court extended her indenture to Moses Gillman for bearing a child out of wedlock. A year later, she went back to court to obtain child support from Teague Disco of Exiter. Once again she was charged with fornication and was sentenced to ten stripes. She came to trial two more times for fornication in 1676. This would be a reputation that was very bad during those Puritan times. Gossip was rampant. Was the wrong woman accused? Or, was the fact that she had the same “disreputable” name enough to cause her to be accused?  There was little evidence given to convict Mary Parker and her testimony was seemingly ignored. Interestingly, the presiding officer, a man named Thomas Chandler, had once been good friends with the Parkers. But, had apparently had a disagreement with them somewhere along the line.