Candy (No Known Last Name) – An African-American slave from Barbados, Candy belonged to Margaret Hawkes of Salem Village. She was examined on July 4, 1692, saying that her mistress, Margaret Hawkes had made her a witch and taught her the craft. She also said that she had made her mark in the Devil’s book when Mrs. Hawkes had presented it to her. The curious magistrates asked Candy to produce the poppets that she claimed she used to torment people. Accompanied by a court-appointed deputy she was escorted home and returned with rags of cloth, a piece of cheese, some grass, and a handkerchief tied with several knots. Deciding to experiment with Candy’s tools of the trade, the magistrates burned one of the rags and allegedly, a burn appeared on the hand of one of the “afflicted girls.” Two more choked as if drowning when another rag was placed under water. Two indictments were handed down against Candy and she was jailed. Later, she was found not guilty and released.

Andrew Carrier (1677-1749) – The son of Thomas and of Andover, Andrew, and his siblings would be examined after their mother was arrested for witchcraft on May 28, 1692. All four children would confess to witchcraft and be imprisoned. Just a week later, their mother, Martha Allen Carrier, was hanged on August 19, 1692. The children would later be released. Andrew would marry Mary Adams in January 1704/05 in Colchester, Connecticut. He would die in the same town on July 23, 1749, and was interred at the Old Burying Ground.

Martha Allen Carrier (1650?-1692) – Born between 1643 and 1650 to Andrew and Faith Ingalls Allen, one of the founding families of Andover, Massachusetts. She grew up to marry Thomas Carrier, a recently arrived bondservant, in May 1664. At that time, she was already seven months pregnant with her eldest child and the couple would go on to have three more. Somewhere along the line, the couple moved to Billerica, about ten miles southwest of Andover. However, the couple returned to Andover when her father and brothers were suffering from smallpox in 1690. Unsuccessful, in nursing them back to health, she soon became a landowner in her own right. Though the couple lost two of their children to the disease, they were blamed for having brought the disease to Andover.

Some believe that Martha was accused of witchcraft because she was a niece of the Reverend Francis Dane of Andover, who condemned the witch hunts and trials. At that time, over one-third of the Salem accused were related to him or his wife in some way. Other historians have blamed her accusation on causes ranging from a conspiracy against Andover’s proprietary families in reaction against threats to patriarchal inheritance. She was also known to have had an independence of mind and an unsubmissive character, which made her vulnerable. 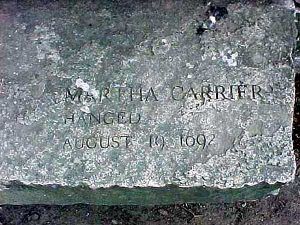 The first accused “witch” in Andover, Martha was accused by her neighbor, Benjamin Abbot after they had gotten into an argument that involved a land dispute. After the disagreement, Abbot fell sick and blamed his illness on her bewitching him and would later testify that she had killed one of his cows. On May 28, 1692, Martha Carrier, along with her sister and brother-in-law, Mary Toothaker and Roger Toothaker of Billerica, and their 9-year-old daughter, Margaret, was arrested and charged with witchcraft. On May 31st, Carrier was examined by Judges John Hathorne, Jonathan Corwin, and Bartholomew Gedney. Testifying against her were several of the “afflicted girls”, including Susanna Sheldon, Mary Walcott, Elizabeth Hubbard and Ann Putnam, Jr. She pled not guilty and accused the girls of lying. Martha’s youngest children were also coerced into testifying against their mother and in July, and she was also implicated by Ann Foster.

In the meantime, her children including 18 year-old Richard Carrier, 15 year-old Andrew Carrier, 10 year-old Thomas Carrier, Jr., and 7 year-old Sarah Carrier were also accused. Her seven year old daughter, Sarah, testified to having been a witch since the age of six, converted by her mother, who could take the form of a cat. Evidence against her, besides the “fits” was the testimony of confessed witches, who claimed the devil had promised to make her the “Queen of Hell.” Neighbors came to testify that Martha had somehow haunted them; a young girl heard Martha’s disembodied voice in the woods; an old man had an argument with Martha and got sick. During her trial, as the girls were writhing around on the floor, shrieking and wailing, saying they saw thirteen ghosts of the people she killed floating about the room, Martha looked to the judge and said, “It is a shameful thing that you should mind these folks that are out of their wits.”

Though her children would survive, Martha would not be so lucky. She was pronounced guilty on August 2nd and hanged on August 19, 1692, along with George Burroughs, George Jacobs, Sr., John Proctor, and John Willard. From the scaffold, the shouted that she refused to confess to “a falsehood so filthy” in order to avoid hanging. Cotton Mather was an observer at this hanging, and in his diary noted Martha Carrier as a “rampant hag” and possibly the “Queen of Hell.”

During her trial, Mather, a prominent Boston Minister,  directed the event to be fully transcribed, as he believed the case to represent the strongest example for the use of spectral evidence. The evidence he found persuasive was the testimony of Martha’s 18-year-old-son, Richard, and her 8-year-old daughter, Sarah, who stated that she made them become witches to “haunt” others at her direction. However, John Proctor (who was hung the same day as Martha) wrote the governor that he witnessed these children’s torture in the jail where he was also imprisoned, stating that they were reportedly tied neck to ankles with a rope down their backs and left that way until said what their interrogators wanted to hear.

Richard Carrier (1674-1749) – The son of Thomas and Martha Allen Carrier of Andover, Richard and his siblings would be examined after their mother was arrested for witchcraft on May 28, 1692. All four children would confess to witchcraft and be imprisoned. Just a week later, their mother, Martha Allen Carrier, was hanged on August 19, 1692. The children would later be released. He died in Colchester, Connecticut in November 1749 and was interred at the Old Burying Ground.

Sarah Carrier (1684-1772) – The seven-year-old daughter of Thomas and Martha Allen Carrier, she and her three siblings would be among those accused of witchcraft in Andover, Massachusetts. After her mother, Martha, was arrested for witchcraft on May 28, 1692, she and her siblings were brought in to be examined. Young Sarah unwittingly helped to send her mother to the gallows by relating that her mother had “baptized” her, as well as her siblings into the Devil’s service. Sarah also testified against her aunt and uncle, Roger and Mary Allen Toothaker, as well as their 10-year-old daughter, Margaret. Just a week after Sarah and her siblings testified, their mother, Martha Allen Carrier was hanged on August 19, 1692. All four of the Carrier children, would themselves confess to witchcraft and be imprisoned. However, they would all be later released. She would grow up to marry John Chapman. She died on December 6, 1772.

2 thoughts on “Witches of Massachusetts – C”