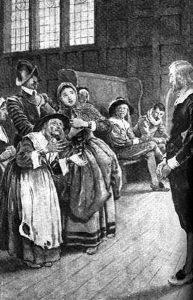 Wilmot Redd (16??-1692) – Wilmot was born in Marblehead, Massachusetts, and executed for witchcraft by hanging on September 22, 1692, in Salem Towne. The wife of Samuel Redd, a fisherman in Marblehead, she had a reputation of being a crusty old woman who was not popular with the womenfolk of the area. The local fisherman knew her as “Mammy.” Her abrasive manner caused one neighbor to bring her before a magistrate for her “mis-demeanures” and she had earlier been accused of witchcraft in 1687. By the time she was in her seventies, her quarrels with a neighbor and disputes involving her butter business had inspired rumors that she was a witch. Furthering this belief was the fact that her daughter had been married to the Reverend George Burroughs, who had been identified as the “ringleader” of the witches.

Accused by several of the “afflicted girls” of Salem Village, a warrant was issued for her arrest and she was picked up on May 28, 1692, by local constable James Smith. The warrant was signed by Magistrates Jonathan Corwin and John Hathorne. The charge brought against her was one of having “committed sundry acts of witchcraft on bodies of Mary Walcott and Mercy Lewis and others in Salem Village to their great hurt.”

She was taken to Salem Village for a preliminary examination in the home of Nathan Ingersoll on May 31, 1692.  Upon her arrival, the “afflicted girls,” which she had never met before, promptly fell into fits. When asked what she thought ailed them, Redd said, “I cannot tell.” Urged to give an opinion, she stated, “My opinion is they are in a sad condition.” She was indicted as a witch and jailed. Four months later she was tried in Salem Town without the benefit of defense counsel. Testifying against her were Marblehead residents Ambrose Gale, Charity Pitman and Sarah Doddy, who said that Wilmott Redd had cursed a Mrs. Syms with an enduring case of constipation.

On September 17, 1692, she was found guilty and condemned to hang. Four days later, she and seven others were executed on Gallows Hill in Salem. She was the only Marblehead resident to be executed. Afterward, she was probably buried in an unmarked grave near her home because the law would not allow her to be buried in consecrated ground. Her small house once stood next to Old Burial Hill, on the southeast corner of Redd’s Pond, which bears her name today. A memorial marker now stands next to her husband’s grave in Old Burial Hill. Centuries later, on October 31, 2001, Massachusetts Governor Jane Swift signed a bill pardoning Wilmot Redd along with four other victims who had been executed for witchcraft.

Sarah Davis Rice (1620-1698) – Sarah was born to William and Elizabeth Quicke Clark in 1620. She grew up to marry George Davis, who died at sea in July 1667. Later she married Nicholas Rice of Reading, Massachusetts. On May 18, 1692, a warrant was issued for her arrest for having committed witchcraft on Mary Walcott, Abigail Williams, and others. She was ordered to be brought to the house of Lieutenant Nathaniel Ingersoll in Salem Village for examination on May 31st. Constable John Parker of Reading complied and delivered her to the examination. She was jailed in Boston and was still there in October when her husband wrote a petition for her release. It doesn’t appear that she was ever tried. She died on May 3, 1698, in Reading.

Susanna Rootes (1620-??) – Of Beverly, Susanna had been married to Josiah Rootes, one of the original founders of the settlement. They had seven children. After he died, she was left with the use and care of his estate until their son Jonathan came of age. A complaint was lodged against her on May 21, 1692, by Thomas Putnam, Jr. and John Putnam of Salem Village for having afflicted Mary Walcott, Abigail Williams, Mercy Lewis, and Ann Putnam, Jr. A few days later, a deposition was given by Andrew Elliott, who would say that he had heard that she was a bad woman and did not always attend prayer meetings. Susanna does not appear to have been indicted but was imprisoned in Boston before later being released. 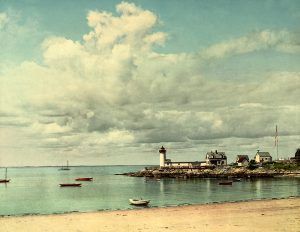 Abigail Rowe (1677-??) – Born to Hugh and Margaret Prince Rowe in Gloucester on December 19, 1677, Abigail, along with her mother, Mary Prince Rowe, and grandmother, Margaret Skillings Prince, would be accused of witchcraft. In the fall of 1692, a Gloucester woman by the name of Mary Fitch had become ill. Much like Joseph Ballard had done in Andover in July, Mary’s brother, Lieutenant James Stevens, a highly-regarded member of the Gloucester community, sent for the “afflicted girls” of Salem Village to find the culprit responsible for the bewitching of his sister, Mary Fitch. Upon their arrival, the “afflicted girls” named Rebecca Dike, Esther Elwell and 15-year-old Abigail Rowe as the witches. A complaint was then filed by Lieutenant James Stevens, his son, William Stevens, and Mary Fitch’s son, Nathaniel Coit on October 30, 1692. All three women were then taken to Ipswich to be examined. No further information exists regarding the accusations, but all three were released on November 7, 1692.

Mary Prince Rowe (1658-1723) – Born on July 19, 1658, to Thomas and Margaret Prince in Gloucester, Mary would grow up to marry Hugh Rowe on September 16, 1674. The couple would have nine children. Sometime in the Fall of 1692, Mary Prince Rowe, along with two other Gloucester women — Phoebe Day and Rachel Vinson were accused of witchcraft.

There is no record of their accusation or examination, but, it is known that they were held in the Ipswich jail. They were among several others who signed a petition in the early winter asking to be set free on bail pending their trials. Other family members accused were Mary’s mother, Margaret Skillings Prince, and her daughter, Abigail Rowe. At some point, Mary was set free. She died on March 3, 1723, in Gloucester.

Elizabeth Scargen – There is no information available about why Elizabeth Scargen, of Beverly, Massachusetts was accused of witchcraft or by whom, however, it is known that she spent at least six months in prison. During that time she also had an infant child with her, unknown as to whether the child was born in prison or if she took it with her. But, that child, after having been imprisoned for four months died in jail.

Mercy Short – A servant of Margaret Thacher, the mother-in-law of Magistrate Jonathan Corwin, Mercy Short was accused of witchcraft and spent some time in prison. Mercy was the daughter of Clement and Faith Short of Salmon Falls, Maine and had been captured by the Wabanaki Indians in the raid that destroyed the town on March 18, 1689. Later, she was rescued by Sir William Phips; but, her parents and three of her siblings had died in the attack. Phips brought her back to Boston and she was later working as a maidservant for Margaret Thacher. During the latter part of May 1692, she had been sent on an errand to the Boston jail, probably carrying gifts or supplies to Mary English, who was imprisoned at the time. While Mercy was there, she encountered Sarah Good who asked for some tobacco. Instead, Mercy Short threw wood shavings at her. Before long, Mercy too was having fits and speaking strangely. She was ministered by none other than Cotton Mather to get her through her “turmoil.” She would accuse Margaret Thacher of witchcraft, but nothing would come of it. It is known that she spent some time in jail; but, appears to not have been indicted or tried.

Ephraim Stevens (1648-??) – Of Andover, Massachusetts, after Ephraim was accused of witchcraft, he was thought to have fled before he could be indicted or imprisoned.

Margaret Stevenson Scott (1615?-1692) – Though there were several others accused of witchcraft in Rowley, Massachusetts, Margaret Scott would be the only one hanged. She was born about 1615 in England, but immigrated to America somewhere along the line, as she married Benjamin Scott in 1642. The couple would have seven children, though only three would live past their childhood. They first lived in Braintree, Massachusetts, then to Cambridge, before finally settling in Rowley in 1651. Lacking the money to purchase their own land, the town donated some property to the Scotts in 1664. The very next year, Benjamin Scott was convicted of theft, but just six months later he took the Freeman’s Oath, indicating he was a church member in good standing. Just a few years later, in 1671, Benjamin Scott died, leaving an estate of only £67 and 17 shillings. Margaret, who was 56 years-old at the time of her husband’s death would soon be reduced to begging, which exposed her to accusations of witchcraft.

Another that might have made her a target was the high mortality rate of the children in her family, which often made women vulnerable to suspicion. At the time of her accusations, Margaret was in her 70s and had no family support. She was formally accused of witchcraft by Rowley’s most distinguished citizens – the Wicoms and the Nelsons. Formal charges were filed after the daughter of Captain Daniel Wicom became afflicted by witchcraft. The Nelsons helped produce witnesses, and one of the Nelsons sat on the grand jury that indicted her. Several depositions were presented before the Salem Court on September 15, 1692, four of which described the spectral image of Margaret Scott tormenting others. Some of those who were allegedly tormented were Frances Wicom, Mary Daniel, and Sarah Coleman. In the end, Margaret Scott was found guilty of witchcraft and was hanged on September 22, 1692.