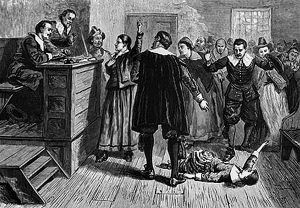 Daniel Eames (1663-After 1695) – The son of confessed witch Rebecca Eames, Daniel also found himself accused. The son of Robert and Rebecca Blake Eames, Daniel was born on April 7, 1663. Daniel and his wife and children lived in his parents’ home and worked on the family farm in Boxford. Shortly before his arrest, he had been absent for a period of time and when he came home, he began to use bad language and was making references to the Devil. Upon learning of this, Salem magistrates had him brought in. They began to ask several witnesses about him and Betty Johnson stated that she had accompanied his spirit at night and witnessed him afflicting the Phelps child. She also said that his specter had hurt her as well as Mary Lacey, Jr. When Eames was brought into the room, all of the afflicted fell to the floor as if struck. He denied all charges of witchcraft. However, more witnesses also accused him, including Mary Warren and Ann Putnam, Jr. Although he was imprisoned, the outcome of the charges is unknown. His wife, Lydia Wheeler Eames was also accused, but, nothing is known of the outcome. Daniel Eames was known to have lived until at least 1695.

Rebecca Blake Eames (1641-1721) – Among those accused of witchcraft during the Salem witch trials of 1692, Rebecca Eames’ case was as bizarre as the rest. While standing in the crowd watching the witch hangings on August 19, 1692, she was accused of causing a pinprick in the foot of another spectator and arrested. Rebecca was born in February 1641 in Gloucester, Massachusetts to George and Dorothy Blake. She grew up to marry an English immigrant named Robert Eames in Andover, Massachusetts in 1661. Living in Boxford, Massachusetts, the couple had eight children.

Immediately after watching George Burroughs, Martha Allen Carrier, George Jacobs, Sr., John Proctor, and John Willard hanged for witchcraft, she was arrested and examined that very day. Condemning herself to death, she testified that the devil had appeared to her as a colt and had persuaded her to follow him. She also testified that she had allowed her son Daniel, who was born in 1663, to be baptized by the devil. She also confessed to afflicting Timothy Swan. Examined again on August 31, 1692, by John Hathorne and Jonathan Corwin, she repeated her earlier confession as well as also implicating the “Toothaker Widow” and Abigail Faulkner as fellow witches. Two weeks later, on September 15th, Mary Walcott, Mary Warren, and Ann Putnam Jr. gave testimony that they, too, had been afflicted by Rebecca Eames. On September 17, 1692, Rebecca Eames, along with nine others were condemned to die. Four of the nine were executed were executed just five days later on September 22nd.

Rebecca’s son, Daniel Eames, as well as her grandson, were also accused. In October, the Court of Oyer and Terminer was dissolved; but, Rebecca Eames remained in Salem prison. On December 5th, she submitted a petition to Governor Phips retracting her “false and untrue” confession, saying she had been “hurried out of my senses” by Abigail Hobbs and Mary Lacey, other accused witches, who had told her she would be hanged if she did not confess. In March of 1693, Rebecca Eames was released from prison. Her husband, Robert, was not so lucky. Having stood by her in her trial, he was deeply affected and died just a few months later on July 22, 1693. In 1711, Rebecca Eames and 21 others were named in an act of the Massachusetts legislature and her civil rights were restored. She lived on to be 82 years old when she died in Boxford, Massachusetts in 1721.

Mary Towne Easty (1634-1692) – Mary was the 58-year-old sister of Rebecca Towne Nurse and Sarah Towne Cloyce, who were also accused of witchcraft. Mary Towne was born to William Towne and Joanna Blessing Towne in Great Yarmouth, Norfolk, England on August 24, 1634. One of eight children, she and her family moved to America around 1640. Mary married Isaac Easty in 1655 in Topsfield, Massachusetts and the couple would eventually have 11 children. 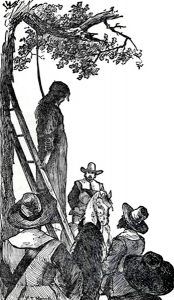 Like her sister Rebecca Towne Nurse, Mary was a pious and respected member of Salem, and her accusation came as a surprise. During the examination on April 22, 1692, when Easty clasped her hands together, Mercy Lewis, one of the afflicted, imitated the gesture and claimed to be unable to release her hands until Easty released her own. Again, when Mary inclined her head, the afflicted girls accused her of trying to break their necks. Mercy claimed that Easty’s specter had climbed into her bed and laid her hand upon her breasts. When asked by magistrates, John Hathorne and Jonathan Corwin, how far she had complied with Satan, she replied, “Sir, I never complied but prayed against him all my days, I have no compliance with Satan, in this….I am clear of this sin.”

For unknown reasons, Easty was released from prison after two months and discharged on May 18th. However, on May 20, MercyLewis claimed that Easty’s specter was afflicting her, and the claim was supported by the other girls. A second warrant was issued that night for Easty’s arrest. She was taken from her bed and returned to the prison; Lewis’s fits ceased after Mary was chained. Easty was tried and condemned to death on September 9, 1692. She was hanged on September 22, 1692, along with Martha Corey, Ann Pudeator, Alice Parker, Mary Parker, Wilmot Redd, Margaret Scott, and Samuel Wardwell. On the gallows, she prayed for an end to the witch hunt. Her parting words to her family were described “as serious, religious, distinct, and affectionate as could be expressed, drawing tears from the eyes of almost all present.”  In the meantime, her sister, Rebecca Towne Nurse, had already been hanged on July 19th. Her other sister, Sarah Towne Cloyce, who had also been accused, was not indicted and escaped the same fate.

Mary Hollingsworth English (1655-1694) –  Mary was born to wealthy Salem Towne merchant William Hollingsworth and his wife Eleanor Story in 1655. She grew up to marry Philip English in 1675, a French man, who had immigrated to Salem in 1670. The couple would eventually have seven children. Her husband, Philip, had already established himself as a successful trading merchant, but, the relationship with the successful William Hollingworth would help him grow his business even more. On April 19, 1692, Mary was arrested to answer a complaint of witchcraft, having been accused by Susanna Sheldon, who claimed to have seen Mary’s apparition, accompanied by a black man wearing a tall hat. On April 22nd, she was examined at the Salem meeting house. She was accused by Abigail Williams would also testify that George Jacob’s specter told her that he had recruited Mary as a witch. Mary remained housed in Salem for three weeks following her examination. On May 12, she was transferred to a jail in Boston to await trial. When her husband, Philip English, loudly criticized the whole affair, he too was accused and on April 30, 1692, and a warrant issued for English’s arrest. However, having advance warning, Philip fled to Boston, where he hoped his influence could be used to free Mary. However, his escape caused problems for Mary and he returned to Salem to face charges of witchcraft. He was examined on May 31st and sent to join his wife in a jail in Boston. With the help of influential friends, the couple was allowed to be free each day, on the promise that they would return at night to sleep in the jail. They were soon persuaded by a Boston minister to flee before their trials and they reluctantly agreed, leaving behind their two teenage daughters to stay with friends in Boston. The couple then made their way to New York. When the hysteria ended in 1693, the couple returned to Salem to find that Sheriff Corwin had confiscated much of their property. The next year, shortly after giving birth to a son, Mary died.