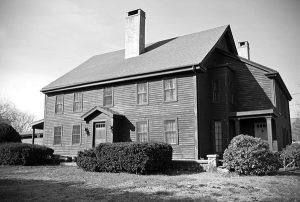 An Accuser in the Family 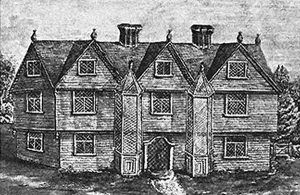 A drawing of the Downing home, which was on the property
that John Proctor purchased in 1666.

Heading up the Proctor family was John Proctor, who had immigrated to the United States with his parents when he was three years old. His father bought a farm in Ipswich, was considered a prosperous landowner, and occupied various offices of trust in the colony. When his father died, he left part of his estate to his son. John would marry three times, losing his first two wives prematurely to death. He married his third wife, Elizabeth Bassett, in 1674, a woman 20 years his junior. By this time, John had moved to the outskirts of Salem, in what is now known as Peabody. He purchased and leased land there, operating a large farm southeast of the Salem Village line. He also ran a local tavern.

John Proctor was very outspoken, and after Rebecca Towne Nurse was arrested for witchcraft in March 1692, he made his thoughts known, doubting the “afflicted girls” and condemning the whole affair. This would soon lead to the persecution of his entire family.

Before long, his maidservant, Mary Warren, began to have “fits” and accused John’s wife, Elizabeth, of being a witch. This was followed by other allegations from the “afflicted girls,” and Elizabeth was sent to jail on April 11, 1692. When John stood up for his wife and spoke out against her accusers, he was arrested and charged with witchcraft. In the frenzy that followed, several other members of the Proctor family would also be accused of witchcraft, including Benjamin Proctor, John’s son from his first marriage, and William Proctor and Sarah Proctor, his son, and daughter with Elizabeth Bassett Proctor. From Elizabeth’s side of the family, there were several more accused, including her sister, Mary Bassett DeRich, and her sister-in-law, Sarah Hood Bassett.

Both John and Elizabeth Proctor were tried on August 5, 1692, convicted, and sentenced to be hung by the neck until dead. John Proctor was hanged on August 19, 1692. Elizabeth, however, would not immediately be hanged because she was pregnant. She would give birth to a son she named John, after his deceased father, on January 27, 1693. By this time, the witch hysteria had died down, and her execution wasn’t followed through. In May 1693, she, along with more than 150 people, was set free by Massachusetts Governor William Phips.

The Proctor Home still stands in Peabody, a suburb of Salem. It is privately owned today.

Sarah Hood Bassett (1657-1721) – Sarah Hood was born to Richard Hood, Sr., and Mary Newhall Hood in Lynn, Massachusetts, on August 2, 1657. She grew up to marry William Bassett, Jr. on October 25, 1675, and the couple would have nine children. She was a sister-in-law to accused witch Elizabeth Bassett Proctor, who would be found guilty of witchcraft and sentenced to die, but was later pardoned. On May 21, 1692, a complaint was made by Thomas and John Putman that she had committed witchcraft on Mary Walcott, Abigail Williams, Mercy Lewis, Ann Putnam, Jr., and others. She was examined by Magistrates John Hathorne and Jonathan, with Ann Putnam, Jr. and Mercy Lewis as witnesses. Two days later, she was indicted. She was imprisoned in Boston until December 3, 1692. She took her 22-month-old child, Ruth, with her to prison and, while there, gave birth to a son named Joseph on December 15, 1692. After the witch hysteria ended, she was released from prison in 1693. She was later recompensed £9 for her experience. The next child born to her on August 2, 1695, was named “Deliverance” in honor of her freedom. She died sometime in 1721.

Mary Bassett DeRich (1657-1712) – The younger sister of Elizabeth Bassett Proctor, who would be found guilty of witchcraft and sentenced to die for the crime of witchcraft, Mary also got caught up in the hysteria. Mary was born to William and Lexi Burt Basset in Lynn, Massachusetts, in 1657. She grew up to marry Michael DeRich, and the couple lived in Salem Village. After her sister, Elizabeth, and her husband, John Proctor, had already been arrested for witchcraft and were in prison, Mary also found herself the target of accusers. On May 23, 1692, a complaint was sworn out against her by Lieutenant Nathaniel Ingersall and Thomas Rayment of Salem Village, alleging that she had afflicted Mary Warren, Abigail Williams, and Elizabeth Hubbard. She was examined on the same day.

To make matters worse for Mary, her son, John De Rich, who was 16 then, would testify against her. Mary was initially sent to a Boston prison, and her husband, Michael, died while she was there. She was later moved to a Salem Town jail. Nothing more is known about her case, but she was released at some point. She died in 1712 in Marblehead, Massachusetts.

Benjamin Proctor (1659-1717) – The only surviving child of John Proctor and his first wife, Martha Giddons, Benjamin, like many other members of the Proctor family, was accused of witchcraft in May 1692. Born in Ipswich in 1659, he spent the first years of his life on his father’s farm in Ipswich. In 1666, his father, John Proctor, moved the family to the outskirts of Salem in what is now known as Peabody. At that time, John Proctor had purchased the Downing farm and leased one of the largest farms in the area. Called “Groton,” the 700-acre spread was situated southeast of the Salem Village line. He also ran a local tavern. While John’s wife and older children managed the tavern, Benjamin and his father managed the rest of his properties. Benjamin was also accused in 1692 after his father and stepmother, Elizabeth had been arrested. On May 23, 1692, a complaint was filed by Lieutenant Nathaniel Ingersall and Thomas Rayment of Salem Village, and a warrant was issued the same day. Though he was known to have spent some time in jail, the specific outcome is unknown. He was released at some point because when his stepmother, Elizabeth Bassett Proctor, was released in 1693, she and his siblings lived with them. Having been convicted of witchcraft, the property belonging to her and her husband had been confiscated, and she had nowhere else to go. In 1694, Benjamin and the rest of the family lived in Lynn. That year, Benjamin married the widow Mary Buckley Witheridge, who had also been imprisoned for witchcraft in 1692. The couple would have four children. He died in Danvers (formerly Salem Village) in 1717.