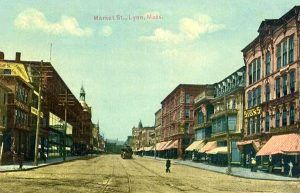 Rachel Varney Cook Langton Vinson (1631-1707) – The daughter of William and Bridget Varney, Rachel was born in about 1631. Sometime before 1649, she married a man named Thomas Cook, who was known as a troublesome character. Living in Ipswich, Thomas Cook was in court for speaking out against the local minister in 1649. His father-in-law bailed him out of jail. A short time later the couple was living in Lynn, where Thomas worked at the iron-works. In 1650, they would have a son they named John. That same year he was arrested for drunkenness on at least two occasions. That same year he died.

Rachel Varney Cook then married a second and more unpleasant man named Joseph Langton, who had also been previously arrested for excessive drinking. In 1652, Langton was in court for the “evil usage of a little child of his wife.” Apparently, Rachel’s son, John Cook, was found lying on straw with but a piece of sail-cloth to cover him in his cradle, having been beaten to keep him quiet. The court ordered the baby to be placed in the care of his Varney grandparents. Afterward, he either died or deserted his wife because there are no more records of him. Though their union was brief, Rachel would have two daughters with him – Rachel and Mary Langton.

Rachel would later marry her third husband, William Vinson of Gloucester on June 10, 1661. The couple would have two children — Thomas and Abigail. William Vinson died on September 17, 1690, in Gloucester. Two years later, in September 1692, the Widow Vinson would be arrested for witchcraft. She was jailed in Ipswich but were released on bond on September 24, 1692. By this time, the witch hysteria was coming to an end, and she was never tried. Rachel died in Gloucester on February 15, 1707.

Samuel Wardwell, Sr. (1643-1692) –  Of Andover, Massachusetts Wardwell was convicted of witchcraft and hanged with several others on September 22, 1692. He was born to Thomas Wardwell and Elizabeth Hooper Wardwell in Boston on May 16, 1643. A Quaker family, Samuel’s oldest brother, Eliakim, moved to New Jersey in 1664 to become a leader among a large group of Quakers who had recently moved there. His other older brother, Benjamin, moved to Salem Towne about the same time in search of a seaman’s job. Young Samuel, 21 years-old at the time, was just finishing a carpentry apprenticeship in Boston and soon followed his brother to Salem. At some point, Samuel met a woman, whose name has been lost in history, and the two married. They had a son they named Thomas in January, 1670. Unfortunately, his wife died just a year later. Samuel then moved with his small son to nearby Andover. 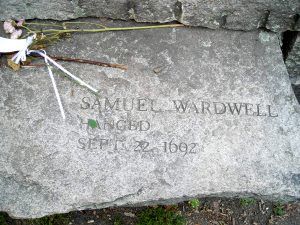 Working as a carpenter by trade, Samuel would marry a wealthy widow by the name of Sarah Hooper Hawkes on January 9, 1673. He would take in her daughter, Sarah Hawkes, Jr. and the couple would have seven children of their own. Up until  1692, Samuel was regarded by the locals as an eccentric, but, the harmless fellow who liked to entertain his friends by telling fortunes and playing with magic. Though the practice of fortune telling was not uncommon among New Englanders in the seventeenth century, it was a forbidden practice by Puritans. Wardwell’s well-known practice of magic, albeit for sport, made him a prime target for witchcraft accusation in 1692. Further leading to his accusations may have been due to his neighbors’ jealousy of his sudden wealth. By 1692, the Wardwells were living comfortably on their farm at the south end of Andover. Because of the recent growth of the town and many buildings being erected, Samuel had faired very well as a carpenter. He was also a Quaker, which many Puritans of the time distrusted.

He was first accused by 16-year-old Martha Sprague, of Boxford, who would not only say that he had afflicted her by pinching, striking, and sticking pins into her body, but would also say that he had afflicted Rose Foster, and her mother Hannah. Wardwell was arrested on August 15, 1692, and imprisoned in Salem Towne. Before long, his wife, Sarah, and daughters, Sarah Hawkes, Jr. and Mercy Wardwell, were also accused of witchcraft. Witnesses against him were not only the familiar group of Salem Village girls but, also three respectable citizens of Andover: Joseph Ballard and Thomas Chandler, neighbors of his who also served as selectmen; and Ephraim Foster, who for years had been clerk of the proprietors. When he was examined on September 1, 1692, he confessed before magistrate John Higginson, saying that he had indeed dabbled in the supernatural by “telling of fortunes.” Under intense questioning, he would also confess to making a pact with the Devil. Later, he would recant his confession, declaring that his tormentors had persuaded him, under emotional stress, to confess; that he regretted that he had even once “belied” himself; and announced that even though it might cost him his life, he would stick to the truth. Samuel Wardwell was hanged on September 22, 1692, along with seven women. In later examinations, Samuel Wardwell would be used as an example of what might happen to people if they recanted.

Sarah Hooper Hawkes Wardwell (1650-before 1712) – The daughter of William Hooper Sarah was born in Reading, Massachusetts in 1650. She would grow up to marry Adam Hawkes in Lynn, Massachusetts in June 1670. Adam Hawkes was much older than she was and she did not wish to marry him. However, marry she did and the couple would have a daughter they named Sarah. Shortly after she gave birth to her child, her elderly husband died, leaving his wife one-third of his estate, making her a wealthy young widow. She soon caught the attention of many eligible men, but rejected them all and chose to marry the penniless Samuel Wardwell on January 9, 1673. Since Samuel already had a reputation for telling fortunes and other devilish actions, there was talk that he had bewitched Sarah into marrying him. In addition to taking in Sarah’s young daughter by the same name, the couple would have seven children of their own. After her husband, Samuel was arrested for witchcraft in August 1692, Sarah, along with her daughter Mercy Wardwell and Sarah Hawkes, Jr. would also be arrested. When she was examined on September 1st, she would confess to being baptized by Devil and had once attended a witch meeting in Salem Village. She claimed that she had seen several other witches at that meeting including Ann Hooker Foster, Lynn, by her first husband, was also confiscated. Sarah remained in prison until she was finally brought to trial on January 2, 1693. Like her husband, she was found guilty. However, she would later be pardoned by Governor William Phips and released. However, having all their property confiscated, the family was destitute. In 1712, his mother meanwhile having died, Samuel Wardwell, Jr., requested and received compensation for the financial loss which his family had suffered.

Mercy Wardwell – (1673-1754) – Born to Samuel Wardwell and Sarah Hooper Hawkes Wardwell in 1673, 19-year-old Mercy would be charged with witchcraft and arrested shortly after her father was imprisoned for the same crime. Her mother, Samuel Wardwell, and half-sister, Sarah Hawkes, Jr. would also be charged. On September 15, 1692, Mercy would confess to having been baptized by the Devil and to having afflicted Martha Sprague, Rose Foster, and Timothy Swan. She was imprisoned, never tried, and sometime later was released.