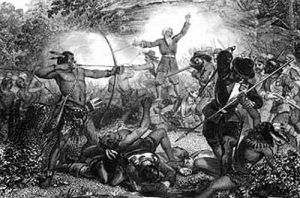 Strange things were reported in Gloucester, Massachusetts in the summer of 1692. Though King Philip’s War had occurred two decades previously, the march of men was heard in its Gloucester streets and an Indian bow and scalp were seen on the face of the moon, while the boom of cannon and roll of drums were heard at Malden and the windows of Plymouth rattled to the passage of unseen horsemen. But, the strangest thing was the arrival on Cape Ann of a force of French and Indians that never could be caught, killed, or crippled, though two regiments were hurried into Gloucester and battled with them for a fortnight. Thus, the rumor went around that these were not an enemy of flesh and blood; but, devils who hoped to work a moral perversion of the colony. From 1692, when they appeared, until the Salem witchcraft hysteria ended, Cape Ann was under military and spiritual guard against “the spectre leaguers.”

Another version of the episode, based on sworn evidence, said that Ebenezer Babson, returning late on a summer night, saw two men run from his door and vanish into a field. His family denied that visitors had called, so he gave chase, for he believed the men to have a mischievous intention. As he left the threshold they sprang from behind a log, one saying to the other, “The master of the house is now come, else we might have taken the house,” and again they disappeared in a swamp. Babson woke the guard, and on entering the quarters of the garrison, the sound of many feet was heard without. But, when the doors were flung open, only the two men were visible and they were retreating. The next evening, the yeoman was chased by these elusive gentry, who were believed to be scouts of the enemy, for they wore white breeches and waistcoats and carried bright guns.

For several nights they appeared, and on the 4th of July, a half a dozen of them were seen so plainly that the soldiers made a sally, Babson bringing three of “ye unaccountable troublers” to the ground with a single shot, and getting a response in kind, for a bullet hissed by his ear and buried itself in a tree. When the company approached the place where lay the victims of that remarkable shot; behold, they arose and scampered away as blithely as if naught had happened to them. One of the trio was cornered and shot anew, but, when they would pick him up, he melted into air. There was fierce jabbering in an unknown tongue, through all the swamp, and by the time the garrison had returned, the fellows were skulking in the shrubbery again. A man named Richard Dolliver, afterward, came upon eleven of them engaged in incantations and scattered them with a gunshot; but, they would be not down. Instead, they lurked about the cape until terror fell on all the people, remaining for “the best part of a month together,” so it was deemed that “Satan had set ambushments against the good people of Gloucester, with demons in the shape of armed Indians and Frenchmen.” 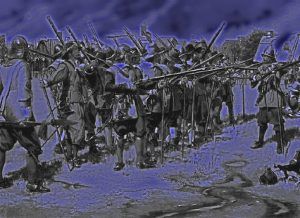 Stones were thrown, barns were beaten with clubs, the marching of unseen hosts was heard after dark, and the mockers grew so bold that they ventured close to the redoubtable Ebenezer Babson, who gazed scornfully down the barrel of his gun, and laid a charm on the weapon, so that, no matter how often he snapped it at them, it flashed in the pan. Neighboring garrisons were summoned, but, all battling with goblins was fruitless. One night, a dark and hostile throng emerged from the wood and moved toward the blockhouse, where 20 musketeers were keeping guard. “If you be ghosts or devils I will foil you,” cried the captain, and tearing a silver button from his doublet he rammed it into his gun and fired on the advancing host. Even as the smoke of his musket was blown on the wind, so did the beleaguering army vanish, the silver bullet proving that they were not of humankind. The night was wearing on when a cry went out that the devils were coming again. Arms were laid aside this time, and the watchers sank to their knees in prayer. Directly after the name of God was uttered, the marching ceased and heaven rang with the howls of the angry fiends. Never again were leaguers seen in Gloucester.

About the Author: Charles Montgomery Skinner (1852-1907), an American writer, is best known for his collections of myths, legends and folklore found both in the United States and across the world. His writings were wide-ranging, including his popular folklore tales, as well as guides to gardening and urban beautification, and natural history. This tale is from his nine volume set of Myths and Legends of Our Own Land, published in 1896. However, the story, as it appears here is not verbatim, as it has been edited for clarification, additional information, and ease of the modern reader. However, the context remains essentially the same.